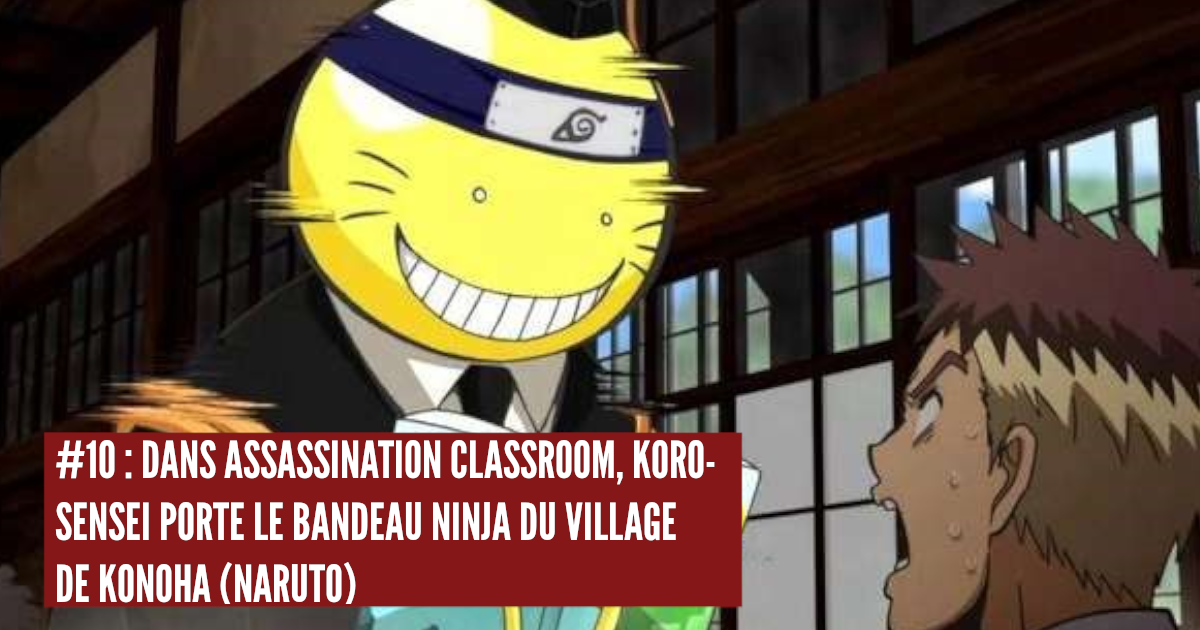 Easter eggs are now part of popular culture. Today we can find it in any work: movies, series, anime, video games, etc. We have all experienced that particular satisfaction at one time or another when the precious reference was found. We had already presented 15 Easter eggs in the Marvel Universe. Today we recommend you do the same, but in the anime! Rest assured, they will not be left out. Without further ado, here are 15 anime Easter eggs that you might not have noticed.

During an episode of Hunter X Hunter, we can see the character of Migi – the parasite who lives in the right hand of the main protagonist of Parasite – on the cover of a magazine visibly devoted to manga and anime. Madhouse, the animation studio behind Hunter X Hunter, had just announced Parasite as a future project. Migi is placed under the “Next” button. The circle closes.

In episode 49 of My Hero Academia – called One for All – it’s possible to take a quick look at the character of Scar who appears in Full Metal Achemist: Brotherhood, except that his scars are not depicted. Even so, it is entirely possible to spot it! Also note: both series are hosted by Studio Bones.

In an episode of Barakamon, we can detect the presence of the paper manga by Full Metal Alchemist and Soul Eater in the characters’ shopping bags. Reads very well!

For those who haven’t noticed, in the background of a scene from Kill la Kill we can watch a legendary cinema duo: Jules Winfield and Vincent Vega! Proof that Easter eggs aren’t just limited to anime.

# 11 There’s a parody of Dragon Ball Z in Gintama.

This parody is called Gintama Kai and features an alternate version of the Dragon Ball Z credits. Obviously, this is just one of the many others in the Gintama universe.

In the anime “Assassination Classroom”, the character of Koro-Sensei refers to a number of very popular manga with fans. Among other things, we can notice nods to Naruto, Dragon Ball Z or Attack on Titan. One more reason to want him as a teacher!

The Hunter X Hunter and Yu Yu Hakusho manga were both featured by the same mangaka, Yoshihiro Togashi. So it comes as no surprise to see a replica of Puu hanging on Kurapika’s cell phone.

In episode 18 of Nisekoi, Chitoge and Kosaki build sandcastles. The two young women then manage to build a beautiful and big city that brings back many memories. In the middle of it we can see a titan attacking a wall … is it really necessary to state which anime he is referring to?

Arakata Reigen appears to be a very good friend of Saitama according to his call log. The superhero also appears in the first position with a photo as a bonus. This is mainly due to the fact that these two universes were created by the same mangaka who officiates under the pseudonym ONE.

The ones who saw the full metal panic anime! The second raid may have paid attention to this scene, which only lasts a few seconds. In episode 6 of the series, it’s possible to see L on a bike, as well as Light, Sôichirô, and Misa from the cast of Death Note.

A scene from the anime Hunter X Hunter (version 2011) lets us take a look at the young Aruka Zoldik who is playing with small dolls. A closer look at the child’s toys reveals that they are strikingly similar to Sailor Moon and Tuxedo Mask. These flagship characters from the Sailor Moon license were both created by Naoko Takeuchi, who is specifically married to the father of the Hunter X Hunter saga.

# 4 SpongeBob SquarePants Carlo gets a cameo in Gurren Lagann

As strange as it sounds, the famous SpongeBob SquarePants Carlo actually appeared in a Japanese anime. During episode 12 of Gurren Lagann, it is possible to take a look at our favorite octopus telling the story of a few moments …

# 3 Sora (no game, no life) has completed these popular J-RPGs

Sora is an avid gamer who has apparently finished all video games within his reach. However, some marked it more than others. Among them we find cult role-playing games from the archipelago such as Akibas Trip, Steins; Gate or Persona 4.

Staz Charlie Blood is the main character in the Blood Lad anime. He’s also an otaku vampire who would rather play video games and read manga than fulfill his obligations. So it’s no wonder that Staz tries to use his favorite hero’s favorite technique during one of his fights: the kamehameha.

The concept surrounding the Death Parade is based on a series of arbitration procedures that can be used to judge whether the souls of the deceased are destined for reincarnation or destruction. One of the episodes of the anime shows Light Yagami patiently waiting for his judgment. A wink full of meaning as we follow the character’s adventures in Death Note.

“The Legacy of Jupiter” is the new superhero series from Netflix