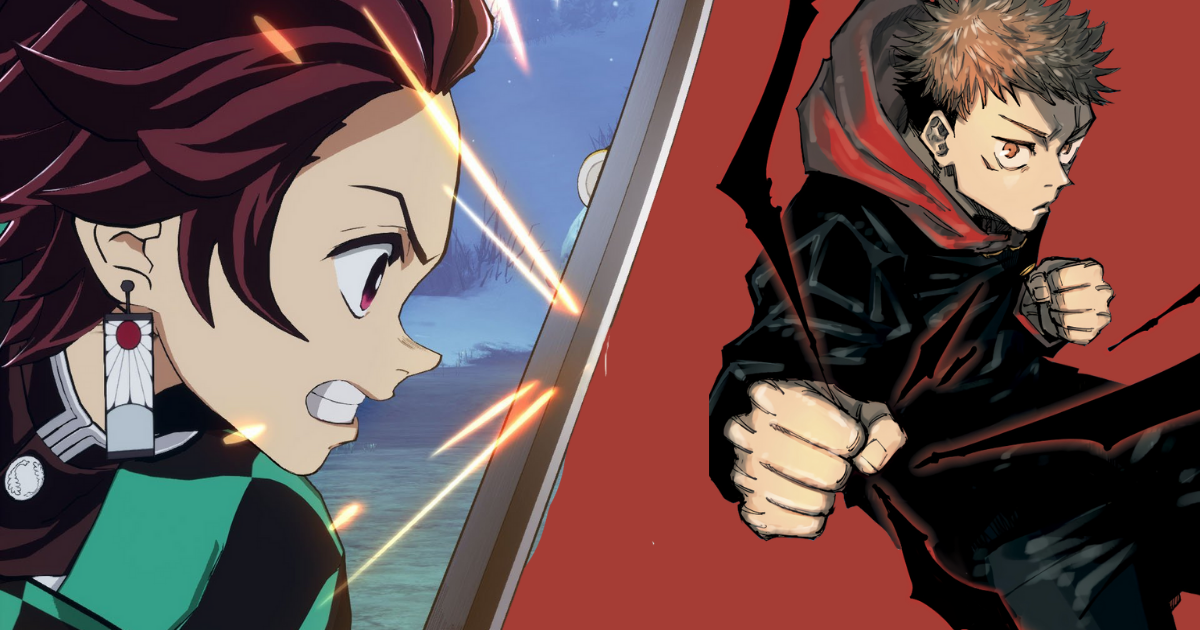 The release of the film Demon Slayer: The Infinity Train made it clear that the hype surrounding the anime and the work in general was far from over. It broke unimaginable audience records and thus became a film. The most successful Japanese animated film in the world. However, another license has also been talking a lot since late 2020. I would of course like to talk about Jujutsu Kaisen (JJK), whose success on the internet already positions it as a cult work for all lovers of Japanese cartoons. But which are the best between demon slayers and exorcists? We shall see this here in this necessarily subjective article.

In order to be able to treat the two works equally, we will mainly talk about cartoons in this article. Since both have a single season of around 25 episodes each, the comparison becomes more relevant than comparing the two mangas (since Demon Slayer was released earlier and therefore more volumes were released than for JJK).

And the point is basically that the two stories are both rooted in the famous Nekketsu-style Shonen genre that is so popular at the moment. This type of narrative process depicts the hero, generally a little boy, who mostly defends traditional values ​​like courage, friendship, and outdoes himself through battle or competition. On his initiation journey, the hero is confronted with the reality of the world around him, thereby testing his determination, but he can also better understand concepts such as truth, justice, tolerance, and the line between good and bad.

However, if the two works appear to be quite classic or even similar in their respective structures, in the sense that it is the story of a demon who is somewhat tamed in order to work on the side of the good, they each succeed in addressing these issues very personal way.

Jujutsu Kaisen has a darker mood and tone without feeling sad or scary all the time. He approaches the subject of darkness with fascination. The various ghosts and plagues, while for the most part hideous and monstrous, are shown in fascinating ways, and not just on scary things. Here we try to awaken the foreign and the fascination with fear and horror. And the characters here don’t fight monsters so much as they fight their own share of darkness and doubt, their own regrets and their own sadness. As if the characters’ whole effort was constantly seeking the balance of light and dark within them while trying to be who they really are without surrendering to the dark side, like the hero Yuji Itadori and the Sukuna- Plague that inhabits them.

In addition, the concept of death is very present in this manga too, but much more abruptly than in Demon Slayer. When death steps into Demon Slayer it is often very dramatic, which reinforces the idea that work wants every death to have an impact. But we don’t necessarily find that sensitivity in JJK, where death can be sudden and surprising. Despite a very sustained tempo, the manga remains very balanced between tragic moments, scenes with humor, hectic fights and contemplative moments.

In Kimetsu no Yaiba, also known as Demon Slayer, we find a mixture of epic story and deep melancholy, as Chef Otaku would say. Melancholy in the literary sense, in the sense that we manage to remove the positive from the unhappiness of character. Victor Hugo defined melancholy as “the happiness of being sad”. And that’s exactly what it is here. It’s sad, but it’s beautiful. And this feeling runs from the start when we see the hero Tanjiro Kamado, who first loses his father. Although his family is more than destitute, they are together, it is a family united. They are sad, but still happy with the life they lead. Tanjiro then loses his entire family, who are killed by a demon, but his sister Nezuko manages to survive. Although devastated to have lost the rest of his family, he is glad that his sister is still alive. And even when he realizes that Nezuko has become a demon, he realizes that she does not devour people and is therefore convinced that there may still be a chance to save her. We then feel that there is always hope in his misfortune. It is this emotional connection we have with the characters that gives Demon Slayer his strength.

Also, almost all of the characters in this manga are deeply unhappy: they are not defined by what they have won, but much more by what they have lost or will lose. So that the various actions and adventures never end really well. In this manga, the “power of friendship” so characteristic of the manga of this genre is not enough to triumph over evil.

The heroes of Shonen are classic characters with qualities that make them admirable that they become ideals to be achieved. And in absolute terms, you could say that Itadori and Tanjiro are almost identical: friendly young men who want to do as much good as possible. But what makes these characters’ real strengths in reality is their flaws, their weaknesses, and their flaws. This is what defines them most and what makes them human and lovable.

For Itadori, it is the fear of loneliness, of not having been useful enough and of not being able to save those close to him. The death of his grandfather affected him so much that he devoted himself body and soul to saving his friends so as not to experience this feeling of helplessness again. In addition, the charm of the characters in this universe accounts for both their pragmatism and selfishness, but also the quirky aspect of each character that gives them a specialty that makes them attractive.

Tanjiro, on the other hand, is probably one of the most sincere and humble figures in the genre. He did not begin this search out of a desire for power or a desire, but out of necessity. Before all this, he was very happy selling charcoal to support his family. But a demon took away everyone he loved, and so he had to become a demon hunter to save his sister. In contrast to other heroes of the same genre, here it is not the hero who seeks adventure or the extraordinary, but the extraordinary that is imposed on him.

But the value of a very good Shonen is measured by the value of his “evil”. And here, too, the two works work in very different registers. In Demon Slayer, Muzan Kibutsuji appears as a very mysterious character who makes you want to know more. With each of his appearances you notice that it is getting more and more frightening. By putting real pressure on the story in each of his interventions, we realize the power of character. He is so terrifying that even his henchmen are literally scared of him. In addition, its ability to change its appearance gives it an authentic depth. We don’t know who he is or what he wants, but we feel oppressed when we see him. It really represents the idea of ​​evil incarnated.

For Jujutsu Kaisen, the main antagonist of the story takes shape in the character of Ryomen Sukuna. He’s a strange antagonist because of his position. Sukuna can intervene in Itadori’s body at any time and even violate its decisions. What defines the strength of the character is its progression. Because the more time goes by, the more of a threat it becomes. He is a cold and greedy person with colossal power and unprecedented malice, resulting in an oversized ego that no individual will consider unless it is powerful enough and therefore interesting in those eyes. He has a sadistic personality and enjoys seeing others in pain, especially people, and never misses the opportunity to make his host Yuji suffer. Despite his brutal appearance, he is extremely intelligent and calculating, which makes him one of the most formidable enemies, capable of the worst and imaginable acts.

Here, too, the two cartoon series offer us a breathtaking spectacle. Demon Slayer made a bold bet with his use of CGI in combat, but this bet pays off as the result is simply remarkable.

In fact, it is the first to succeed in perfectly combining so-called classic Japanese animation with the CGI that can be found more and more in the animation series of the last few years. And if it’s been abused many times to give a semblance of depth, the idea of ​​partially using it for breathing techniques to get a better perspective is truly amazing.

This is immediately understandable with Tanjiro’s water jet technique, in which we find a more traditional Japanese art style with a vortex of water around his sword that evokes an aesthetic similar to the Great Wave off Kanagawa by ‘Hokusai. A brilliant idea from Studio Ufotable, who produces the series and which has gotten us excited in the past when it comes to animation, especially with Fate / Stay Night: Unlimited Blade Works.

With Jujutsu Kaisen we probably have the best animations right now. At the same time, the animated series is produced by the MAPPA studio, which also animated Kakegurui (Gambling School), but also the adaptation of the famous Manwha The God of High School or the fourth and final season of Shingeki no Kyojin. aka Attack on Titan. We are therefore talking about a studio that has more than proven itself.

And it shows that they know what they are doing. Whether it’s the fight scenes, which are arguably some of the best choreographies, or just a few stills, the animation is breathtakingly beautiful. The intensity of Satoru Gojo’s gaze as well as the scene of the expansion of his domain are perfect examples of this.

Even the choice of plans, angles and lighting shows that nothing has been left to chance. Not only is it beautiful, it’s artistic too. With Jujutsu, Kaisen begins the new era of a generation of animated series that will be visually breathtaking.

Although we were able to bring the two works together in a variety of ways, the fact remains that each has managed to renew their genre by offering something classic, but one that perfectly adapts to its universe and takes us on its journey. While I slightly prefer Jujutsu Kaisen, the discovery of Demon Slayer left a deep mark on me and I look forward to the release of Demon Slayer: The Infinity Train, which motivated the writing of this article. The question “Which is the best?” However, it remains completely subjective and there is no definitive answer. The best answer is to look at both of them and make up your own mind! What do you prefer

Arraial: This is the name of the new music publisher in Portugal

Another setback for Trump in Wisconsin court | Free press