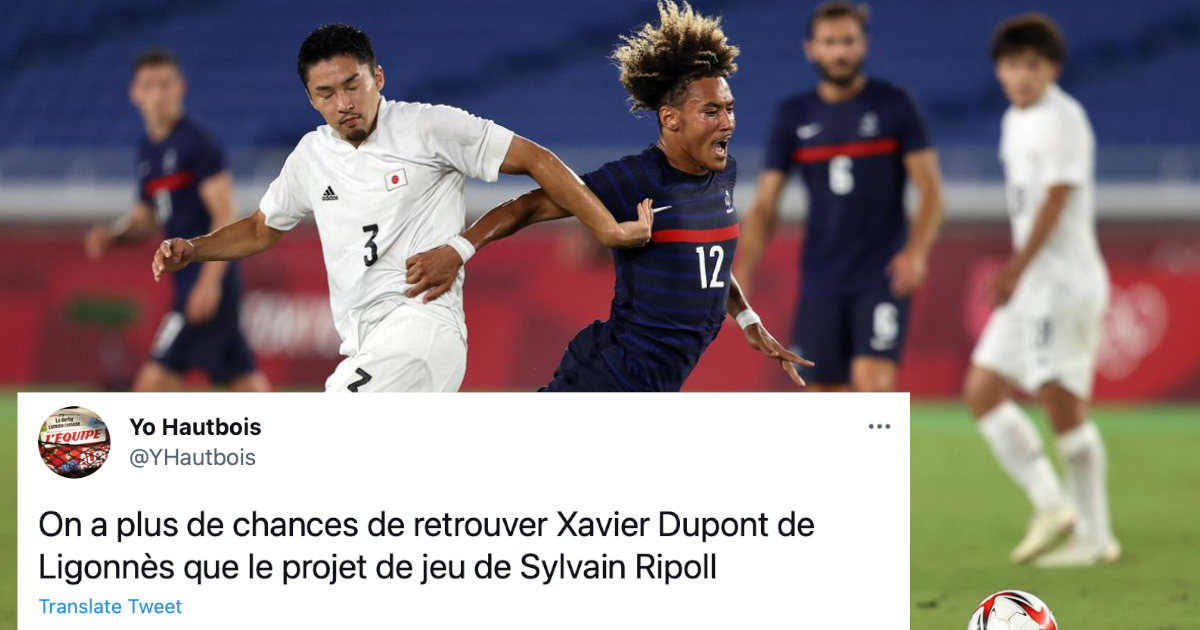 That is the end of the French Olympic football team, which has just completed one of the worst courses in its history after its 4-0 defeat by Japan on Wednesday, July 28th. Sylvain Ripoli’s men have conceded eleven goals in just three games. This means they have the worst quota since 1908 and are already eliminated from the Olympic Games. As usual, Twitter did not hesitate to tread the disastrous course of the blues.

The French soccer team at the Olympic Games: #FRAJAP pic.twitter.com/p0DG4QOhDt

Hiroki Sakai is also happy about a good first half. I’m about to jump to France 4 to see basketball it’s so embarrassing what the French team is offering.

The Michelin we wanted VS the one we got #FRAJAP pic.twitter.com/mOppW5RXMS

The defense of the French soccer team at every game of these Olympics in # Tokyo2020. #FRAJAP pic.twitter.com/JjCiqAoWYY

11 – The French team conceded 11 goals in the group stage of these Olympics, with only Fiji in 2016 (23) and Serbia-Montenegro in 2004 (14) underperforming in this phase of the 21st century. This is the worst total number of blues in the Olympics since 1908 (26). Tourists. #FRAJAP pic.twitter.com/uXl8fX4NpT

You still spend a lot of time trying to figure out reasons why the French football team failed when there is a simple one:

Sakai more crucial than Thauvin in this edition of the Olympics.

Can we open a parallel debate?

The more I see Thauvin, the happier I am to have him in my club.

How not to speak of S. Ripoll to conjure up the reasons for this double fiasco of hope. Results aside, it’s incredible to be so weak in the game with so little intention. We fall against Mexico and Japan, who have a clear and efficient game plan.

Even Sakai scores against us, but Ripoll will get a contract extension tomorrow because he has aroused emotions against South Africa

Sakai’s goal. The French team will be eliminated and banned from all international competitions until 2050. #FRAJAP

Thank you @FabLeveque for putting an end to L1 clubs for not letting their players go. Scandalous. # JO2021 #FRAJAP

Thauvin is a shitty gamer. #FRAJAP

Hiroki Sakai has more goals than Florian Thauvin at these Olympics. #JAPFRA

Waiting 25 years to experience humiliation. A disastrous defense, a nonexistent environment, an attack where only Gignac will have existed. Everything organized by a Ripoll on his bench with his arms crossed. Congratulations to our opponents who played with a real game philosophy # FRAJAP

I see France against Japan in an Olympic game, it’s a total cleansing. I’ve never had so much hatred of being out of work and being available at 2 p.m. to see this shit

Let Sakai lead you 2-0 through a goal pic.twitter.com/rddVSgA3Vg

Hiroki Sakai more decisive than Florian Thauvin at the #Olympic Games, who would have believed him? pic.twitter.com/nQFfXNbdTP

Worse total for France since the 1908 Olympics

Did you like this article? Do not hesitate and discover the best reactions from internet users during these Olympic Games!