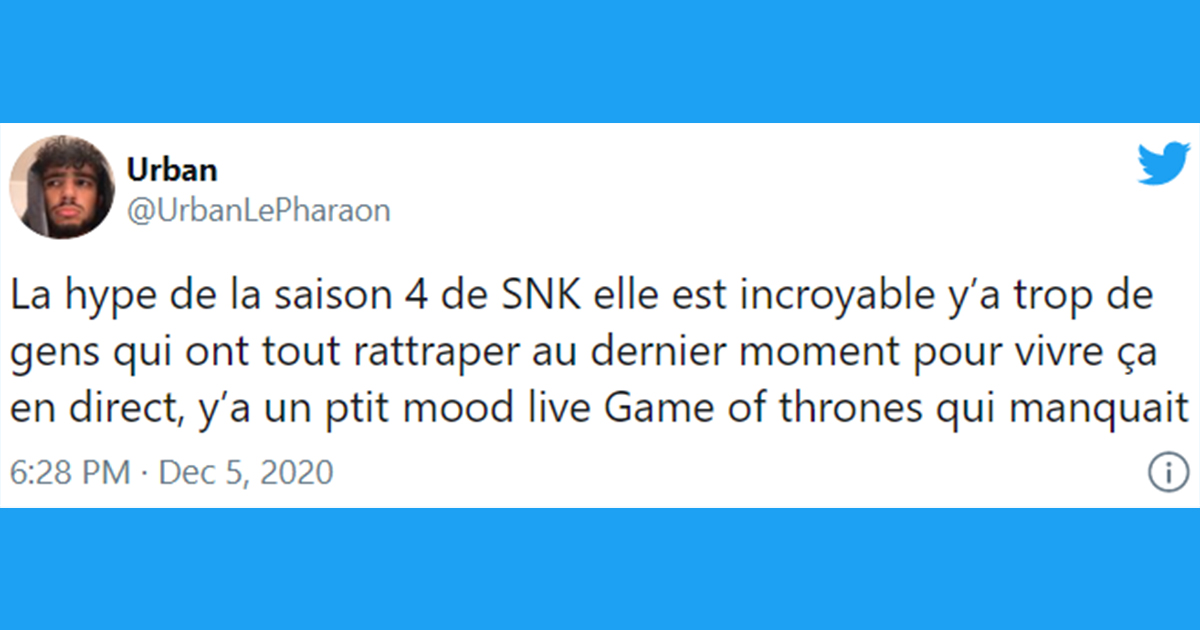 There’s no spoil in these top tweets regarding this first episode, rest assured.

# 1 Wakanim, who knew the battle was over

Our servers in one hour: pic.twitter.com/d1S6JdPmKK

# 2 We’re still young, everything is fine

Age Test: If when you experience SNK you think of the Neogeo / Deadly Fury first instead of the attack on the Titans.

# 4 when you hear that music

The big day has come! Today the s4 of Attack on Titan starts !! #AttackonTitanFinalSeason pic.twitter.com/R96fpsQLtB

# 5 we want to shine something!

A Chara design that shows us that Eren Glow up is not the only one with #attaquedestitans #AttackonTitanFinalSeason #jeankirschtein pic.twitter.com/owJ971nlvu

The aftermath of the attack on Titans was blocked on Wakanim’s hard drive: pic.twitter.com/qRXsDVm6pG

# 8 if you are concerned about Wakanim’s future resources

Wakanime if they email me to resume my subscription after the fourth season of the attack on the titans ends pic.twitter.com/IkGqx50vyN

Wakanim after amassing all the money from new VIP subscribers: pic.twitter.com/4TJ556nNOl

# 13 when Terracid wants to be hip

(I’ve never seen an animated one in my life and I’ve been on google to see what “SnK” is.) Https://t.co/fymlBDH0XC

Cant wait to see the new Snk season in 144p on Spanish streaming sites. My country has not yet discovered the animated pic.twitter.com/hdddbR7C4d

The whole planet is hyped up by SNK, I feel like I’m missing out on something crazy, I’m down

# 17 we’re not talking about the Mali resident people, we’re talking well thought out

There is a person he thinks is “snk”, which means “soninké”.

# 18 when you transform into a living movie theater

I cry for her grandmother as I’m the only one of my friends who can see the SNK episode. Well, I’m sharing the screens with those who haven’t seen them yet

This is the third time I’ve watched the episode. I officially became a cinema. It’s killing me. Pic.twitter.com/oHoC5QfrPy

# 19 when Japan produces the best ad ever

Attack on Titan x Snickers, the best collaboration you will see today. #TweetDeNnight

# 21 They don’t know what they’re missing

On the other hand, those who are not into Snk and Wakanim must go crazy with the tweets

The boss of Wakanim, whom he looks at Snk all by himself, is dead

Attack on Titan in an amusement park in Japan #AttackonTitanFinalSeason pic.twitter.com/nBPx7qhN19

# 24 we can understand the need

I just wanted to see Eren’s face, I’ve been with him since 6:34 p.m. #AOTFR WHUUUUAANNNNNNN pic.twitter.com/FG5k0iMg9t

# 25 we validate the Game of Thrones atmosphere?

The hype of the SNK season 4 is unbelievable, there are too many people who have caught everything at the last moment to experience it live, there was a little “Game of Thrones” mood missing

Those who are still awake at this time are likely the ones who don’t care about tomorrow’s episode of SNK. Tell me why you don’t like this manga. I’ll see you all in the debate until my colleagues wake up who are going to take over

Tonight at 6:34 p.m. don’t tell me about the attack on the titans’ young people. Fans of Japan. I have a busy schedule. Pic.twitter.com/lByvB6ZYKh

Wakanim who bowed specifically for the fourth season of SNK pic.twitter.com/3HJlCWASMm during my subscription

#AttackonTitanFinalSeason
Me after watching 20 seconds of the first episode of the fourth season of SNK: pic.twitter.com/BKebOJzOOq