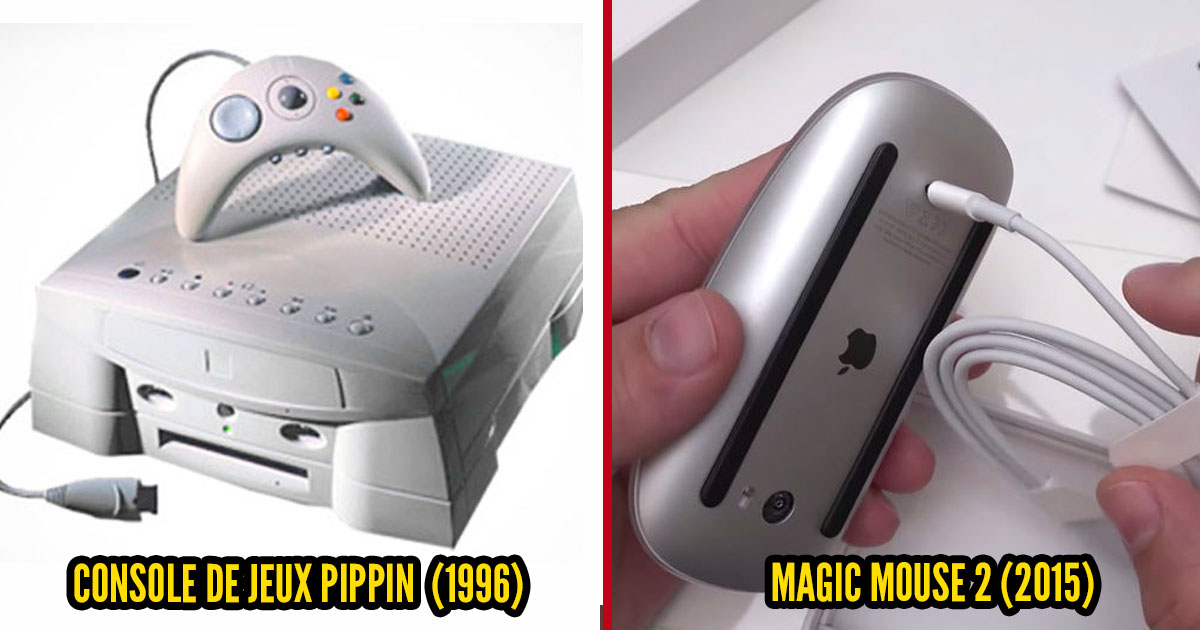 Many of us see Apple as a success story. However, if we take a closer look and look better, we can see that the Apple brand is not only successful with its name.

15 APPLE Products / Services That Can Be Considered Real Mistakes

If Apple is synonymous with quality guarantee for you, we’ll show you that this is not necessarily always the case. By analyzing the old, but also the current products, we were able to compile a list of the brand’s defects and imagine that it is not exhaustive!

The Apple III almost sunk the mark with the apple. Indeed, the successor to the Apple II opted for originality rather than efficiency. For this computer, Steve Jobs had simply decided not to install an internal fan, which created problems that nearly ruined Apple.

While using the computer, the Apple III’s electronic cards warmed up and bulged out, causing repeated failures for all devices of this type.

Here is the ancestor of the touch tablets! In fact, the Newton MessagePad could have been a minor revolution in the 90s if it had worked.

The main selling point, handwriting, just didn’t work on the early versions. In the late 1990s, the failure is such that Steve Jobs is forced to move on to other projects for the brand.

The Macintosh Performa was considered by many to be one of Apple’s biggest flaws and, at first glance, was a successful model. The appearance and materials used for the design seemed to suit consumers at the time.

However, while using the product, we really understood that there was a problem. In fact, the machine suffered from a simply unfortunate internal architecture that created a long list of problems that would take too long to detail (locks, crashes …).

Many people are unaware that Apple has attempted to enter the video game console market in the past. It’s just because that attempt failed! Released in 1996, the Pippin wasn’t a bad console, however.

On the contrary, it was quite ahead of its time. Halfway between the game console and the desktop computer, you could really play online with the Pippin. Unfortunately, given the tough competition, found the machine too expensive, failed to find an audience and was viewed as a commercial flaw.

Many of you have probably known the elegant Mighty Mouse. Released in 2005, this computer mouse was the subject of much debate at the beginning of its development. It was then a question of whether or not it would have buttons. In the end, Apple decided to assemble the device with two side buttons, a 360-degree wheel, but also two “right” and “left” touch sensors.

If the idea seemed interesting, over time the brand will very quickly forget about certain mouse functions. In addition, there are many issues related to the daily use of the product (wheel that has stopped working, especially due to dust), which can only make the mouse hate many users.

The iPod Shuffle was a good product for listening to music anywhere, and it was reasonably priced. However, the 3rd generation of the device ruined everything and took a somewhat chaotic direction.

Apple also tried its luck on the social media page. As with video games, it wasn’t very successful. In 2010, the apple brand launched Ping, a social network connected to music and thus to iTunes. Due to the lack of users, the service will be out of service in less than 2 years and ping will be considered a major commercial mistake.

Connect, for its part, shared the same fate as Ping, who made it possible for artists to communicate with their fans through Apple Music.

In 2010, Apple marketed its award-winning iPhone 4. Very quickly, new buyers of the product recognized a problem that could prove to be more than annoying.

On this phone, the antenna used to receive a call was in a slightly inconvenient location. Receiving a phone call could then be blocked with the user’s hand in front. At this point in time the Antennagat was born. This also earned us the strange but mythical quote from Steve Jobs: If your iPhone isn’t working properly, it’s because “you’re holding it badly”.

To get you to a destination today, you surely trust the Maps app. In 2012, many users made the same choice as you and quickly regretted it.

On that day, Apple decided to compete with Google Maps with its own map software. This gave a rather disastrous result. In the beginning, the app sent users off to the wrong destinations, so Apple had to publicly apologize. Fortunately, the software has improved significantly over the course of the updates.

The second generation of MacPro is a particularly painful memory for Apple. In fact, based on a cylindrical architecture, the company chose to prefer the design to the detriment of the user experience.

In this way, Apple will also attract the ire of critics, but also of professionals who then prefer other more ergonomic machines.

It started with a good intention though … In 2014, Apple decided to offer U2’s Songs of Innocence album to iTunes users. But now the announcement has not been particularly well received by the public. Especially when users have seen the group’s music automatically install in their library without giving their consent.

Apple then alienated many fans who viewed the process as an invasion of their privacy.

In 2015, the Magic Mouse 2 sounded like a wind of renewal at the level of Apple mice. Compared to its predecessors, the product swapped batteries for rechargeable batteries.

Now, while users thought they were safe from charging issues, they were shocked to learn that the Lightning charging port was right under the mouse. To charge the device, the mouse had to be placed on its back and was therefore unusable during this time.

The MacBook 12 “Retina is a great product to this day. The pill was even more difficult for Apple fans to swallow back then as they learned how the laptop worked.

Although the Mac works from an aesthetic point of view, it suffered from many problems. A high price for inadequate performance, a single USB-C port, and a butterfly keyboard are good reasons why Apple has opted for a new MacBook Air instead.

At the end of 2017, tests showed that limitations were encountered on the oldest devices during the iOS updates. Apple reacts with surprise and explains that it has reduced the performance of some iPhones in order to extend the life of their batteries.

This matter still outrages consumers who feel hurt because they don’t have the right to choose between performance and battery. Many of them even consider this to be a planned obsolescence. Since that scandal, Apple has decided to leave the choice to users and even offers them to change the battery at a reduced price.

The Magsafe Duo is also emerging as a future flop for Apple. In fact, the product sells for 149 euros, although it is less efficient than its previous version.

The Magsafe Duo not only no longer offers a 20 W USB-C PD power supply for the environment, but can also only be charged with an output of 11 W with this adapter. As a reminder: with the simple MagSafe the device could be charged with 15 W (except for the iPhone 12 Mini).

To get the most out of the Magsafe Duo, you need to go to the checkout to get a USB-C PD power adapter of at least 27 W. This allows you to achieve 14 W.