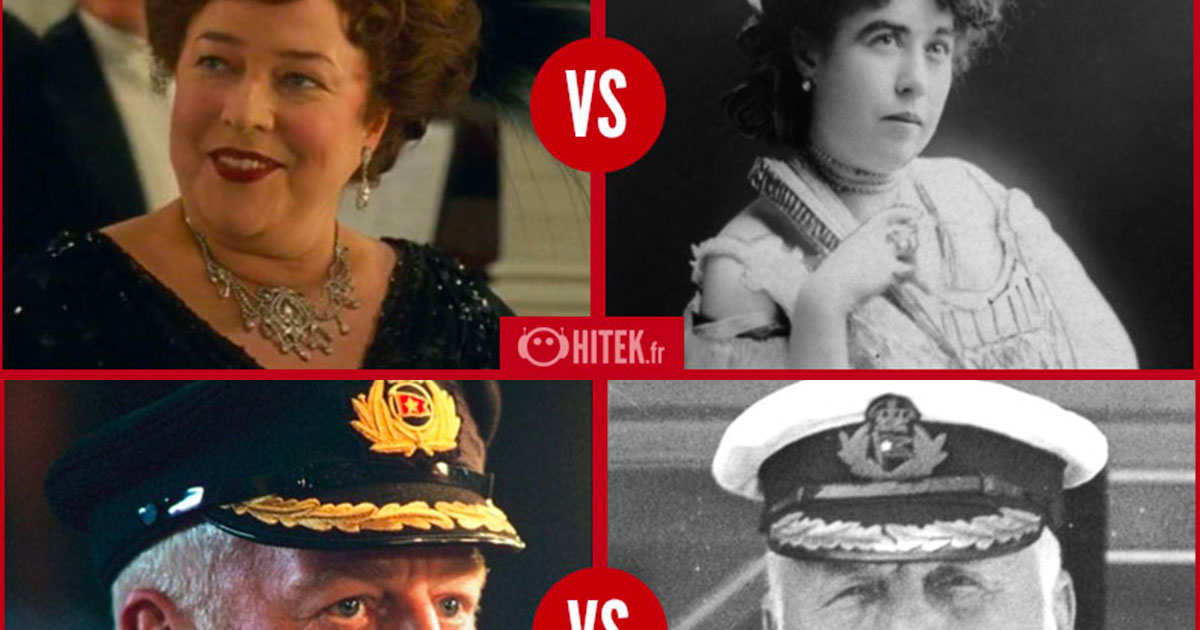 We had already offered you to find out what the actors who starred in James Cameron’s Titanic in 1997 look like today. Today we invite you to find out which characters really exist. If some are pure fiction made up by James Cameron like Rose and Jack, others like the Captain and Thomas Andrews are indeed real. Discover 20 characters who were actually passengers on the Titanic.

Margaret Brown, also known as Unsinkable Molly, was an American activist. As in the movie, Margaret had her heart in her hand and helped the passengers board the lifeboats. After being brought to safety, like in the film, she tried to convince her to return to look for passengers. After the shipwreck, she organized fundraising campaigns to help the survivors of the disaster. She received a Legion of Honor for all of her work.

Before Edward Smith became captain of the Titanic, he already had 40 years of experience as a seaman, which made him one of the most experienced captains on the White Star Line. As in the movie, the captain died on board the ship, but he did not lock himself in his cabin. He helped the frightened passengers and helped his crew. He was last seen when the ship’s deck was flooded.

Joseph Bruce Ismay was the director of the White Star Line and for this reason he participated in the maiden voyage of the Titanic. He wanted a boat whose luxury could not be surpassed, and it was he who reduced the number of lifeboats from 48 to 16 so as not to clutter the deck. In the film, he is referred to as a selfish character who escaped with a dinghy at the time of the disaster, but in real life he helped the passengers. He survived the downfall, but his reputation was forever tarnished.

As in the movie, Thomas Andrews is indeed the creator of the Titanic. He put all his heart into creating the ship, but he knew its weaknesses and, like in the movie, prepared for the inevitable after the iceberg hit. Before he died on board the liner, he helped the passengers. He also reportedly tossed the sunbeds overboard in hopes that they could float and be used as a liferaft while they await rescue.

William Murdoch was number one on the crew. As in the movie, he did everything he could to avoid colliding with the iceberg. On the other hand, he is portrayed as a cowardly person who accepts bribes and does not hesitate to shoot passengers, which is not true. Additionally, after the film was released, his family was so outraged that the production had to personally apologize and donate to the Murdoch Charity Fund.

As in the film, Harold Lowe took the initiative to collect the canoes to better distribute the passengers and return to the site of the shipwreck to retrieve the last survivors. After the sinking, he received numerous awards and continued his career in the Navy. He served as a commander in the Reserve Navy during World War I.

Charles Lightoller was William Murdoch’s second. During the sinking, he helped 29 men pour one of the overturned canoes again. After the disaster, he helped improve the ships that carry passengers. In particular, he insisted on increasing the number of lifeboats and better communication between boats.

Colonel Gracie survived the sinking and assisted the passengers. When he returned home, he wrote a book telling his experiences on board the liner. This was a real source of information for historians and people who wanted to learn more about the shipwreck. The Titanic disaster never left the Colonel’s mind. His last words before he died were: “We have to put them on ships, we have to put them all on ships.”

The Countess de Rothes was a first class passenger. She escaped the sinking of the Titanic on a lifeboat and helped third class passengers. She was last seen aboard the Carpathian Mountains, one of the boats that came to repatriate the survivors.

The couple we see devoured on the bed during the shipwreck also existed. You are Ida and Isidore Strauss. Isidore wanted his wife to get on a lifeboat to save her life, but Ida refused. She said to her husband: “We have lived together for so many years, where you are, I am.” So they died hand in hand.

Like in the movie, Wallace Hartley was the conductor on the ship and like in the movie he chose to play until the liner sank to reassure the passengers. None of the musicians survived.

John Jacob Astor IV was an American entrepreneur and the richest person on board the Titanic, perhaps one of the richest in the world at the time. He lost his life in the downfall. His body was one of those that were recovered and he could be identified by his initials on his jacket.

Madeleine Force was the second wife of John Jacob Astor IV. She was pregnant while traveling on the Titanic. She and her husband hoped their child could be born in the United States. Madeleine survived thanks to her husband, who made sure she could get on a lifeboat. The child was born a few months after the Titanic sank.

He was the radio operator on the Titanic. He had been warned by other boats that there were icebergs in the water, but he was so overworked that he ignored the news. After colliding with the iceberg, he spent his time broadcasting distress messages over the radio. He drowned in the radio booth.

Harold Bride was Jack Phillips’ second. Its job was to transmit the passengers’ personal messages over the radio. He helped Jack Phillips send the distress messages, but survived. He managed to get on a lifeboat. He was one of the main witnesses during the investigation into the sinking of the Titanic.

As in the movie, Frederick Fleet is the man who is on guard when the iceberg hits. After the sinking, he explained that there was a lot of darkness and that he had no binoculars, which made it even more difficult to see the iceberg. Frederick Fleet was in the same lifeboat as Molly Brown.

So much for those 16 Titanic passengers who existed in real life. Other passengers really existed, we particularly think of Benjamin Guggenheim, Cosmo Duff-Gordon, Lucy Duff-Gordon, or even Henry Wilde. If you want to extend the pleasure, rediscover or rediscover the before / after Titanic.