This robotic surgeon has succeeded in the first 100% autonomous operations 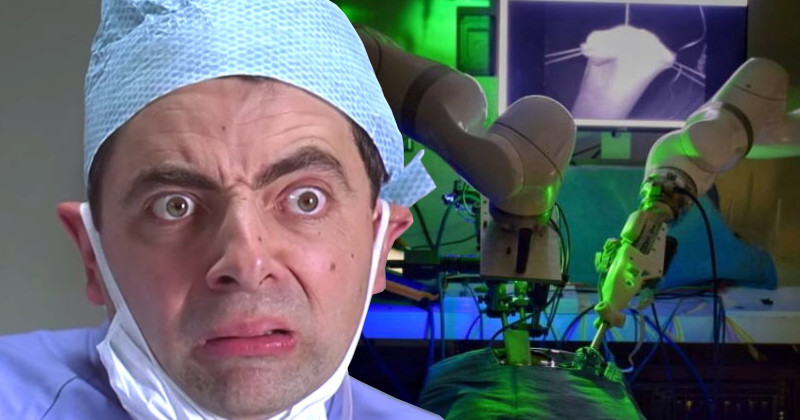 We cannot stop progress. Granted, the feat we’re going to talk about here won’t allow us to colonize the universe or save the planet, but it’s a huge step in the right direction in the world of surgery and robotics. In fact, a robotic surgeon has managed to perform the same operation multiple times successfully and 100% autonomously.

Every day, researchers and scientists work to improve our daily lives and our future. This is particularly true of medicine, a particularly important sector that has made great strides in recent years. And this is an important new breakthrough that may be credited to researchers at Johns Hopkins University in the United States. For several years they have been working on a robot that can perform surgical procedures.

Named STAR, for Smart Tissues Autonomous Robot, this robot is the result of several years of research and improvement. As early as 2018, he was able to precisely sew up the intestines of a pig, albeit with considerable human help. So teams at Johns Hopkins University have been working hard to improve every component of the robot, from the software that allows it to perform the operation to new infrared cameras, to make it more efficient and, most importantly, more precise.

More prepared than ever, STAR tried his luck again by performing unaided surgery on four pigs in a row. He pulled through all four times with flying colours.

An autonomous robot is more talented than a human

“STAR is the first robotic system capable of planning, adjusting and performing a surgical procedure in soft tissue without human intervention.” Here is what Axel Krieger, pictured below, proudly explains, leading the research on the STAR robot and who believes that robotics must ultimately “help treat patients outside of a hospital setting.” And with good reason, the latter recently got to try his luck again by operating on four pigs. As the results of the tests published in the journal Science Robotics show, he actually performed four intestinal anastomoses, which consisted of connecting two sections of intestine. A particularly complex process that requires extreme precision. And yet, STAR did it perfectly every time, saving the guinea pigs bleeding. A feat all the more impressive given that not all real surgeons achieve such a result. So the robot would be more precise and efficient than a real surgeon.

With the number of robotic surgeries already estimated to be over 640,000 in 2017, this is a huge leap forward as this time the surgical procedures will be done without human intervention. But rest assured: If researcher Axel Krieger believes that “it will be important to have an automated robotic system for such interventions,” he has no plans to replace humans. Procedures of this magnitude, performed by robots on human patients, are not on the agenda and will continue to play an assisting role in the most complex procedures in the years to come.