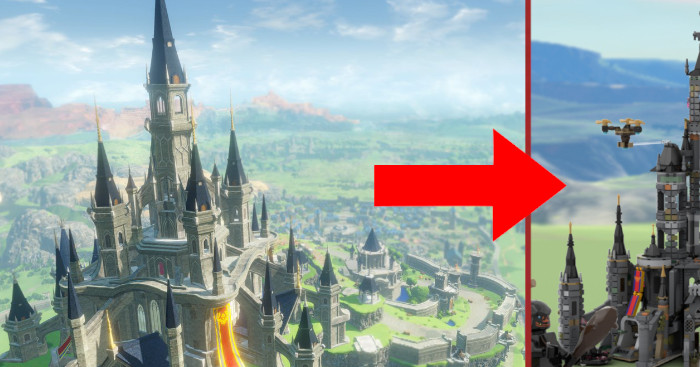 The largest entertainment licenses, whether cinema or video games, are entitled to their adaptation in LEGO. With every new set that is published or even auctioned, many people get ecstatic in front of these works, which come straight from pop culture. A replica of the magnificent Hyrule Castle could hit store shelves today.

Last November, LEGO announced the arrival of a 6,785-piece AT-AT (Star Wars) that sold for € 799.99, as well as this magnificent representation of the RMS Titanic, which is 9,090 pieces thick.

Some of the most beautiful creations on the market today come from LEGO Ideas, a crowdsourcing platform developed by the LEGO Group since 2008. It enables the general public to offer creations with a view to marketing them. From this temple of originality, for example, in 2015 came a variation of the famous Disney and Pixar robot WALL-E with 677 parts or, more recently, the gigantic house of Mom I Missed the Plane last November (3955 parts).

Right now, the focus of attention is on one creation that may soon be on the market. This is a depiction of Zelda’s iconic Hyrule Castle, inspired by Zelda’s model design: Breath of The Wild. In fact, the work has just received the required number of 10,000 votes for successful marketing. Well, almost since it is now up to LEGO to study the project and then or not to validate its commercialization.

But how are the projects examined that could potentially take up space on the shelves? These sets are analyzed by what is known as the LEGO Review Board, a team of designers, product managers and other key team members. For several months, such a top LEGO consultation will determine the suitability of the set according to three criteria: playability, safety and brand suitability. This process often requires several months of study.

Nothing has been acquired for this replica of Hyrule (e.g. Samus and Ridley’s ship that emerged from Metroid was rejected). Nevertheless, let’s hope that the project hits the mark in the eyes of the committee.

The set includes: Ganon, Bokoblins, the Parasail, a flying guardian, Link and Zelda, the Hylien shield or a replica of the Master Cycle Zero, Link’s tough motorcycle. Your mouth will water here.