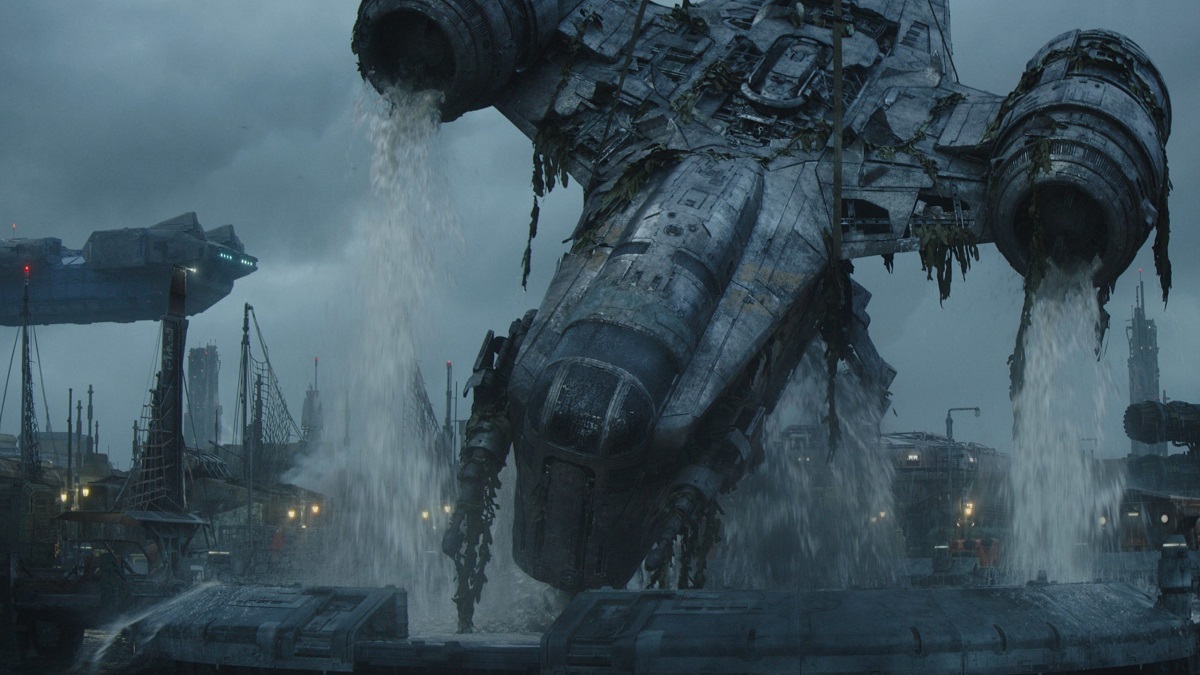 The third episode of season two of The Mandalorian, released today on Disney +, is, as always, full of references. Here are the ones not to be missed! If you missed these from previous episodes, you can click here for episode 1 and there for episode 2.

At the beginning of the episode, Mando, Baby Yoda and the passenger arrive with a bang on the planet Trask, which they wanted to reach in episode 2. As soon as they get there, they meet a Mon Calamari, an emblematic species of the Star Wars saga, as the famous Admiral Ackbar was a part of it.

It appears that there are many Quarrens species on Trask, a planet specializing in fishing. The quarrens come from the same planet as the Mon Calamari (the planet Mon Cala). We met a certain number of them in the Star Wars films and in the three Prelogie films in particular.

AT-ATs are known to Star Wars fans and war vehicles of the Galactic Empire. However, the function used on the planet Trask performs a much more peaceful function than usual, as it is used as a crane to lift Mando’s ship out of the water. If at the beginning of the episode the viewer can see a sign of peace there after the end of the Galactic Empire, they quickly find a different symbolism than we discover that survivors of the fall of the empire are working for its resurrection on the planet …

This episode is an opportunity for Star Wars fans to experience the first live-action incarnation of a cult character from The Clone Wars: Bo-Katan. She is played by Katee Sackhoff, who has already voiced the character in the animated series. Bo-Katan is a Mandalorian warrior who played an important role in recruiting the Jedi to besiege Mandalore and oust Darth Maul from the throne. Later in Star Wars: Rebels, Sabine Wren gives her the Darksaber to unite the Mandalorian clans. In The Mandalorian, she is looking for the Darksaber owned by the mysterious Moff Gideon.

5 / The Kryze Clan and the Death Guard

During the initial discussion between Mando and Bo-Katan, reference is made to the Kryze Clan and the Death Guard. These are two Mandalorian clans known to fans of Dave Filonis series (The Clone Wars, Star Wars Rebels). By taking over the head of Clan Kryze and the Army of the Dark Sword, Bo-Katan managed to unite the various Mandalorian clans and regain control of Mandalore. The Death Guard is an extremist group that has repeatedly attempted to overthrow the Mandalore government.

Subsequently, Bo-Katan Mando promises to introduce her to a Jedi if he agrees to hold an Imperial Gozanti-class cruiser with her and her gang. This ship is widely used in the Star Wars saga and appears frequently in the The Clone Wars and Star Wars: Rebels series.

Thanks to thermal detonators, Mando manages to kill the stormtroopers who blocked the passage of the four Mandalorians who came to attack the Imperial Gozanti-class cruiser. They first appeared at the beginning of the Jedi’s Return when Leia threatened to blow up the Jabba the Hutt palace where Han Solo is being held.

He is the main antagonist of the Mandalorian series. Last seen in the first season finale of The Mandalorian when he emerged from the smoldering carcass of his TIE, Darksaber in hand. In episode 3 of the second season, he appears as a hologram and orders the captain of the Imperial Gozanti-class cruiser to crash the ship on the planet Trask in order to get rid of the Mandalorians who have entered the ship.

It has long been known that Ahsoka Tano, Anakin Skywalker’s padawan who appeared on the Clone Wars series, made her first live-action appearance in Season 2 of The Mandalorian. As a result, it is Bo-Katan who advises Mando to look for him.