The Courier
HomeWorldThese 4 heroines prove that Miyazaki is even more feminist than you...
World 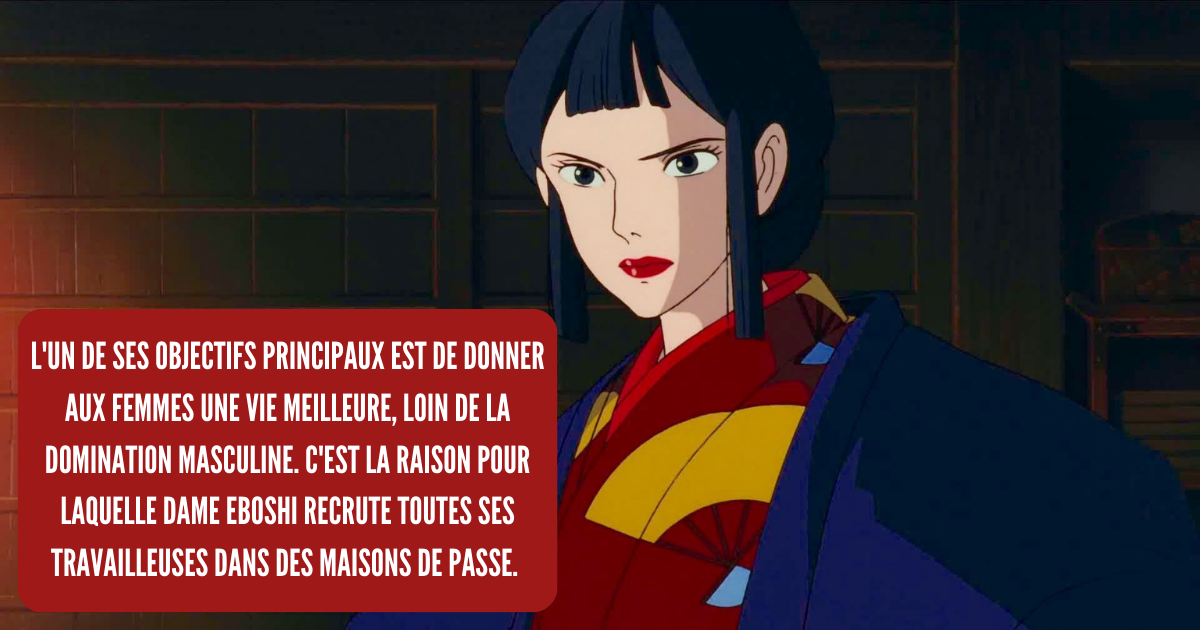 The place of women is a central element in Hayao Miyazaki’s films. Reversing Japanese society and the traditions of most animation studios, the vast majority of the main characters are women.

And if not, Studio Ghibli’s female characters are still characterized by their independence, strength of character, as well as the purity of their intentions (even when it comes to antagonists!).

Although essential and ubiquitous, the feminist message of Miyazaki’s films shines through its implicit aspect. On the one hand, Misandry is extremely rare, and on the other hand, women are most often respected by the men around them.

However, it happens (less often) that certain characters are confronted with hostile patriarchal figures or explicitly sexist attitudes.

Given that, we can at least say that the heroines of Miyazaki are not the type to be walked on. Here are 4 female characters who openly freed themselves from patriarchal authority in Miyazaki’s films.

In Porco Rosso, the character of Fio, a talented young mechanic, is particularly representative of the women’s struggle for equality. Indeed, its surroundings (Italy between the wars) is one of the most historically realistic worlds portrayed by Studio Ghibli.

Let’s put things into context: after Porco Rosso, the famous pig-headed aviator, damaged his plane in a duel with his main competitor, he takes his seaplane for his official aviation repair.

There he learns that the crisis that has ravaged the country has forced men to leave Italy to find work. The repair job is therefore up to Fio, the granddaughter of the 17-year-old owner of the premises. When Porco Rosso found out about this, he was very skeptical and determined to pack.

But Fio is just as determined not to let him go. She specifically asks him if the problem lies in the fact that she is a woman or that she is too young. Without hesitation, the aviator replied that both aspects clearly posed a problem to him.

Far from being bothered by this moment of ordinary sexism, the mechanic makes a particularly compelling speech, highlighting the lack of a causal link between talent and age.

She admits, without breaking an eyelid, that she “obviously can’t stop being a girl,” but that doesn’t matter: he won’t be disappointed. After all, Porco is easily convinced of the young girl’s talent.

Later in the film, Porco and Fio are surrounded by a horde of sky pirates after an unfortunate combination of circumstances. The latter is not far from being treated as a trophy woman on this occasion.

Despite this particularly uncomfortable situation, the mechanic absolutely does not allow itself to be disappointed and is so impressive that her legendary repetition allows her to immediately gain the respect of the pirates. Thanks to his intervention, the latter also move from the cliché of masculinity to the admiration of male children in no time at all.

Fio is not only bright and determined, but also repeatedly proves the value of her femininity by explicitly putting sexist behaviors in her place.

Ponyo is a very interesting character in that she doesn’t necessarily portray the mature, evil, and determined heroine one can imagine. She’s just a half-human, half-fishy little girl, just four years old.

Even so, she is able to unleash the oceans on her own to find the boy she loves. But above all: she has to flee from the authority of her father, who wants to keep her prisoner away from the surface.

His father’s intentions are not necessarily belligerent: the underwater wizard is primarily concerned with the safety of his (tiny) daughter. Especially since it terrifies people (mainly because of the pollution of the oceans).

Even so, he still embodies the portrayal of a limiting figure due to his rise above Ponyo and undermines all forms of freedom because he wants to overprotect them. Despite her young age, the little girl is determined not to let go of her and escapes her father’s control.

Princess Mononoké is not satisfied with having one of the most emblematic feminist figures in pop culture with San as her protagonist, and she also stages Dame Eboshi. While this former nobleman is the main antagonist of the feature film, he’s far from having classic Manichean villain intentions.

Despite her contempt for the keeping of the forest, Dame Eboshi is a charismatic leader with a big heart. She is particularly popular as the head of the village of blacksmiths as she is the only one who takes care of lepers who are rejected by the rest of the world. But above all, it is characterized by its struggle for women.

In fact, one of his main goals is to help women have a better life, far from male dominance. This is why Dame Eboshi recruits all of her workers into brothels.

In his village these women are considered to have equal rights with men. In fact, they work hard with more strength and courage than their male counterparts. The smiths never miss an opportunity to make fun of them.

Both intellectually and sexually emancipated, they do not allow themselves to be entered by men, who are anything but easy with them.

4) Dora (The Castle in Heaven)

Dora is a particularly interesting character as she appears to be a direct inspiration from Miyazaki’s mother.

Strict yet loving, Dola Miyazaki is a true role model for her son. So much so that if she dies of tuberculosis during the production of Nausicaä from the Valley of the Wind, he will do everything in his power to pay homage to her through more modern, determined, and inspiring heroines like his mother.

According to Miyazaki’s younger brother Shiro, Dora’s personality and demeanor are clearly inspired by her mother. So it’s no wonder that they have the same first name (“r” and “l” are pronounced the same in Japanese.)

In the film, Dora is an outlaw pirate boss … at least in appearance. Her love of winning doesn’t stop her from having a good background and really taking care of the young Sheeta she will take under her wing. Although the latter embodies the figure of the woman in need, it is not limited to that. She doesn’t hesitate to take out her kidnappers to escape a flying fortress at the beginning of the film.

Sheeta will also sacrifice herself to free the boy she loves. This final act is also celebrated by Dora as an act of bravery worthy of a young girl worthy of the name!

After all, Dora says it herself: her love sacrifice reminds her of her younger years. With the influence of the pirate mother, Sheeta becomes even more confident and courageous.