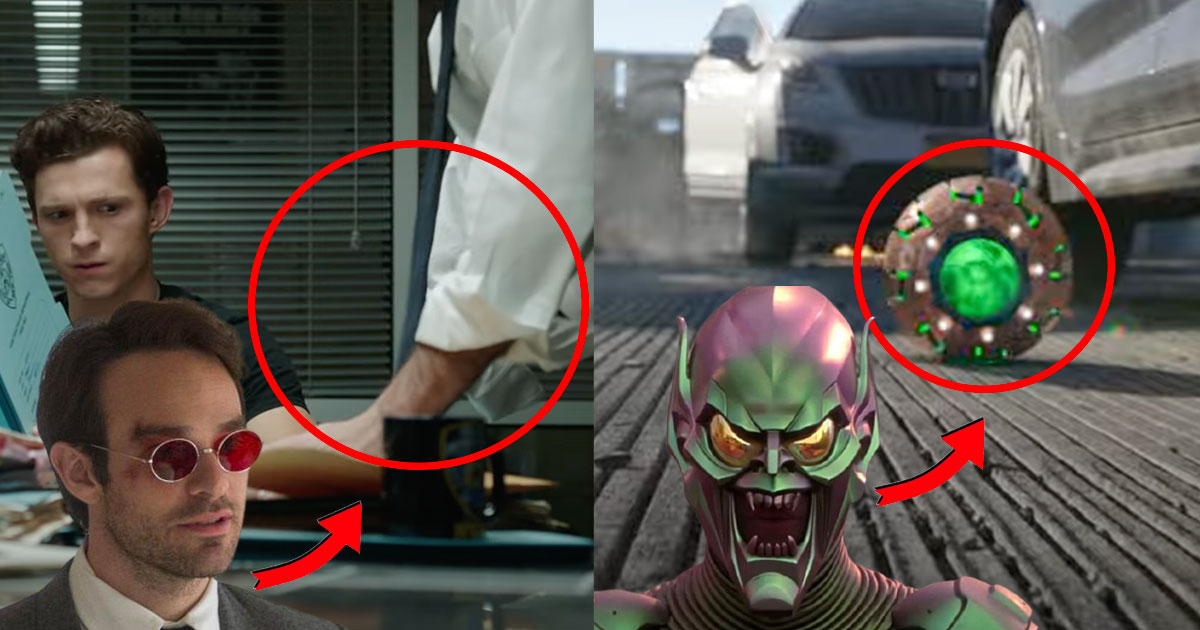 The trailer for Spider-Man: No Way Home has just been released and there has been a lot of talk about it on the internet. It must be said that this film, starring Tom Holland, Zendaya and Benedict Cumberbatch to name a few, has been the source of the craziest theories to date. If we didn’t see Andrew Garfield or Tobey Maguire in said trailer, we could discover 23 interesting details in the latter. And we’ve been looking forward to sharing it with you!

1) an astonishing resemblance to the appearance of Tobey Maguire

We start with a bang with a very intriguing detail: at the beginning of the trailer (and at the end) we see Tom Holland’s Peter Parker in clothes that match those of Tobey Maguire in the films, see instead:

For many, this is no coincidence. Either this is a blunt allusion to Tobey Maguire or it really is Tobey Maguire, and the footage in the trailer has been tampered with by placing Tom Holland’s face on Maguire’s body. The MCU got us used to it in the past, including the appearance of the Hulk in the Avengers: Infinity War trailer, so why not? The fact that the trailer opens and closes on this costume is very intriguing anyway.

2) the newspaper that mj reads

MJ reads the New York Post from the real world, which is an interesting detail because in Sam Raimi’s Spider-Man films the characters read the Daily Bugle (although the latter was clearly modeled after the New York Post). This is a subtle reminder that we are no longer in the world of Raimi’s films. Note that the Daily Bugle in Far From Home is a television channel on whose antenna Jonah Jameson also reveals Peter Parker’s identity.

3) An excerpt from the credits from Far From Home

As we all remember, the previous Spider-Man movie, Spider-Man: Far From Home, had a pretty shocking ending that didn’t really leave Peter in the best of world. Thanks to Mysterio’s machinations, Peter saw his secret identity come to light. We get a glimpse of this from the very first moments as Peter appears to have both celebrity and underdog status, and it has a very negative impact on MJ and Ned Leeds.

4) the return of the DODC

In this trailer we see Peter being questioned by some police officers. However, we need to take a closer look at the badges visible on their jackets. In fact, these are not normal agents as we read the acronym DODC, or Department of Damage Control. They first appeared in Spider-Man: Homecoming and were tasked with dealing with the mayhem that was brought to the cities after the great battles between superheroes and villains.

Peter Parker is questioned and is still accused of killing Mystério with the Stark Drones: for this reason he is considered an outcast by part of the population.

6) the introduction of daredevils?

While there is no official sign of Charlie Cox as Matt Murdock in this trailer, it looks like Peter needs a good lawyer in No Way Home, and it’s hard to imagine a best time for Daredevil, the most beloved character of Marvels Netflix, Introducing Epoch.

Unless the faceless person throwing a pile of files at Peter is actually Murdock. It’s just a simple guess, then; to see if it comes off

The movie Spider-Man: No Way Home seems to be at least partially set around Halloween time. Spider-Man: Homecoming was discontinued early in the September school year, while Spider-Man: Far From Home was a summer vacation movie. Assuming the end of the latter is the end of summer, at this point in the No Way Home trailer, Peter has to grapple with his infernal new existence for 60-90 days. Note that part of the film was supposed to take place around Christmas, as we had discovered in the shooting photos.

8) Peter is considered an enemy, he asks Strange for help

Benedict Cumberbatch returns as Doctor Strange for the first time since Avengers: Endgame and seems to be fine. He seems a little too … He’s in a hurry to help Peter by casting a spell designed to erase the memory of the whole world.

9) Strange’s Shrine is covered in snow

It is clear that something is wrong with Strange’s Sanctuary as it is snowing inside. Does the latter have problems with his magic for some reason? Or is that one of the things we have to expect in the Doctor Strange and the Multiverse of Madness movie?

The long-discussed black and gold Spider-Man costume seems to be making its first appearance here. Is this a new costume Peter made, or is he taking a quantum leap and encountering a different form of himself elsewhere in the multiverse? The debate is open.

Wong shows up in this trailer to tell Strange that helping Peter Parker would be a mistake. It’s also interesting to note that the fact that Peter tries to solve his problems through magic is the basic idea of ​​one of the most hated stories in Spider-Man comics, a story we can read in One More Day, and the one that Announced Peter’s marriage to Mary Jane in exchange for Aunt May’s life.

However, Stephen completely ignores Wong’s advice and goes on an adventure with the Multiverse to make the whole world forget the identities of Peter Parker, including MJ and Ned.

14) Peter Parker is the source of interference that complicates everything

Peter Parker appears to be the source of the multiple interferences with the multiverse that we can see in this trailer.

We owe the opening of the Multiverse to the series WandaVision and Loki, and we find some idea of ​​it in What If. When you see Stephen Strange manipulating the multiverse, things are clear: in Phase 4 of the MCU, everything is very interconnected.

16) turned a city upside down as in Doctor Strange

In some sequences we realize that the city that Peter is crossing will experience an impressive chaos: these images are reminiscent of scenes from the film Doctor Strange.

In the No Way Home trailer, we see lightning bolts detonating police cars and signaling the return of Electro (we’re pretty sure it’s not a simple multiverse storm, anyway).

You can also see a lot of sand in the same scene where you see lightning bolts. Did Sandman and Electro team up in a joint attack? It seems so.

Harold “Happy” Hogan was Tony Stark’s personal chauffeur and was charged with overseeing Stark’s mentoring at Spider-Man. After Peter finally defeated the vulture, the young hero won Hogan’s admiration and respect. The character has already appeared in Homecoming and Far From Home and is therefore set to make a comeback in No Way Home.

For many fans, the creature in this photo is the lizard. It also appears that the creature Peter Parker is attacking makes the same sound as the lizard in Amazing Spider-Man 1 starring Andrew Garfield. Confirmation of this fact?

We have clues to the return of Willem Dafoe’s Green Goblin thanks to a pumpkin bomb and the character’s sinister grin in the trailer.

At exactly 2mn27, as you can see in this picture at the bottom right, we see a black and gold suit again, but the latter seems to have a lot more gold plating than Tom Holland’s first black suit. Clearly to some internet users, it’s Tobey Maguire’s black costume, and the gilding would just be reflections associated with the lightning bolt.

At the very end of the trailer we see Alfred Molina’s Doctor Octopus, whom we told you about in a previous article. The latter also said “Hello Peter” to him, but the character should only know Tobey Maguire’s Peter Parker …

Lots of clues, but in any case we know that according to Tom Holland we are only seeing a “tip of the iceberg” and many other things are waiting for us:

“This is just the tip of the iceberg. You have no idea what’s going to happen.”

–Tom Holland after the release of the teaser trailer for # SpiderManNoWayHome.pic.twitter.com / GXCuv40L6c

We can’t wait to see more.

This excellent gaming laptop has a super discount

Because of this, Tony Stark will never be able to return to the MCU