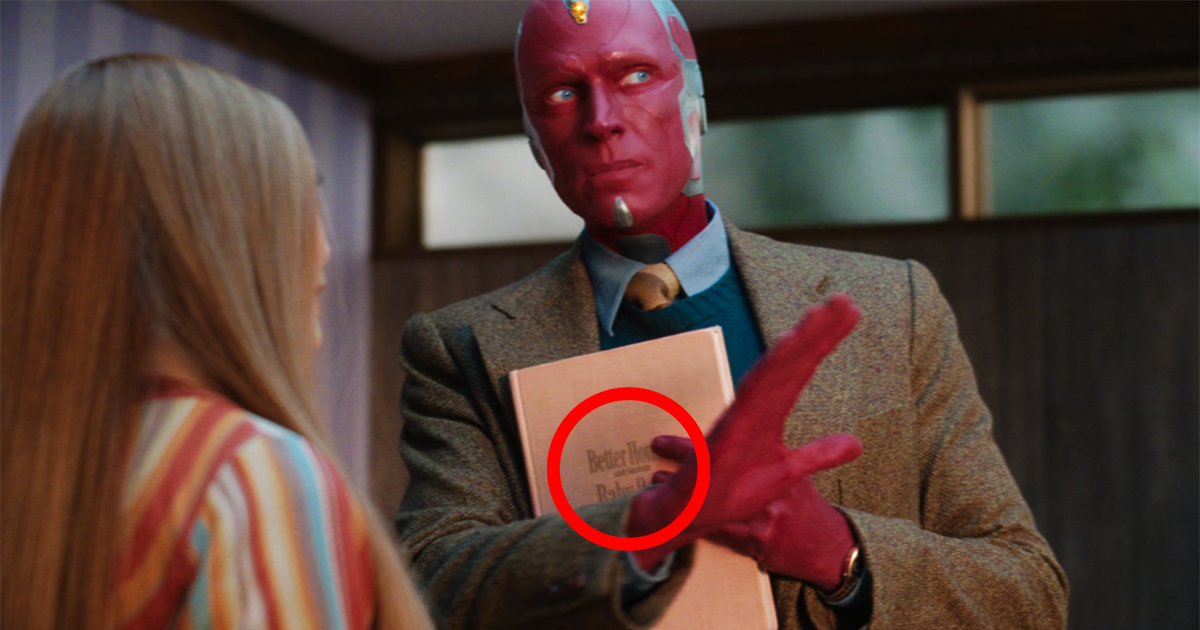 If you haven’t seen the details that you need to remember from the first two episodes of WandaVision, we’ll give you time to read the article. Here we are going to try to cover all the important points of this brand new episode. Get ready to delve into the key details of the third episode of WandaVision in 14 points!

Warning: This article contains a lot of loot from Episode 3 of WandaVision.

The hexagon is back at the very beginning of this third episode. This is a lovely little Easter egg that is reminiscent of Wanda’s witch quality. In witchcraft there is actually the famous pentagram. However, by connecting the five points of the five-pointed star of the pentagram, we get a pentagon. This is the polygon so referring to witchcraft as much as possible.

Herb number 2 that cuts the wall

The episode hasn’t started yet, but it already has a lot of quirks. After the doctor confirms that Wanda is indeed pregnant, Vision goes outside and finds Herb simply cutting the wall instead of just pruning the hedge. Vision points this out to him and Herb realizes the mistake, but does not stop his gesture. It reminds us of the “bugs” that appeared in the first few episodes (for example, when Vision’s boss’s wife is annoying like she is just a computer simulation).

# 3 Vision and its references to Pietro

Vision has some similarities with Wanda’s brother Pietro in this episode. Was that used to make a reference at the end of the episode? Even so, it’s the first time we’ve seen Vision with longer hair (reminiscent of Pietro’s cut), but that’s not all. In this episode, Vision regularly uses super-speed, while we’ve never seen it in the MCU. Could this be evidence that fleeting memories are returning to the memory of Wanda, who mingled the beings she loved most in her life? Vision himself will say during the episode that he didn’t know he was capable of such a speed.

You’d think the stork’s introduction was pretty accidental, but it’s not at all. First of all, obviously, the stork is the animal that, according to legend, brings newborns. Let’s try dig a little deeper. Wanda can very easily make what she does not want to see disappear, or even reverse the time, but she cannot make this stork disappear and it is not for lack of experimentation. The first possibility is that this stork is subconsciously referring to Tony Stark.

Keep in mind that the red helicopter she spotted in previous episodes was the color of Tony Stark and, with its vivid color amid shades of gray, it seemed like an alien element. In English the stork is called “stork”. Inverting a single letter gives “strong”. Is your brain trying to bring you back to reality through metaphors? Second solution: This bird comes from the “real world” and also appears at the same time as Geraldine, a person who probably also belongs to the real world. Is it because these living things are very real that Wanda cannot get rid of them? Is it because these are the only things she didn’t create?

# 5 Read the book on visual pregnancy

When Wanda goes into labor, Vision opens a book on pregnancy to learn more. The first passage he read was about bogus work and certainly relates to the “bogus job” that Wanda does, since she is not really pregnant and everything is bogus. Wanda will cut him off by asking him to get the correct information faster. She probably just didn’t want to hear about bogus work.

# 6 Children of Wanda and Vision

The episode centers around the birth of Wanda and Vision’s two babies, Tommy and Billy. In addition, these names are no coincidence. In the comics, Wanda and Vision once had children. In Vision and Scarlet Witch Vol 2 # 12 (released September 1986), Wanda and Vision have twins named Tommy and Billy. In this comic, however, we learn a little later that the two children were just magical constructions created by Wanda. It is revealed that she used shards of Mephisto’s essence to give soul to her children, but the latter were eventually reabsorbed by Mephisto and eventually ceased to exist.

The episode ends when Wanda and Vision prepare the nursery for cans with the paint “Simser”. The name “Simser” refers to the name of Jeremy Simser, an employee of WandaVision’s art department who provided storyboards for six episodes. Why did you refer to this man? Well, it turns out that Jeremy Stinser will also be working on another job that is none other than … Doctor Strange: In the Multiverse of Madness. WandaVision and Doctor Strange are two related works, we know it and this wink proves it again.

As we’ve seen before, Wanda can “rewind” if something doesn’t please her. Around 8:49 am, Vision tries to get Wanda to understand that something is wrong and starts giving her some examples. In contrast to the first episodes, you don’t see Wanda “rewind”: the screen is cut off as if it were a mistake and Vision resumes her sentence, this time without expressing any doubts. Wanda managed to get him back on the path she wanted him to take.

As for the first episodes, this third episode contained an advertisement, this time for the product “Hydra soak”. A mother, overwhelmed by events, overhears the narrator asks her: “Do you need a break?” She replies “You read my mind”. The mother is then taken to a heavenly bath, and the narrator comments: “Escape to a world just for you, where all your problems disappear. When you have to escape without having to go anywhere.” . A comment that perfectly describes the place Wanda locked herself in (or was locked up).

As Agnès and Herb reveal, Geraldine has no home. She’s not from Westview, and certainly not from Wanda’s imagination. She also knows Wanda’s past as she knows what happened to her brother Pietro. Wanda then realizes that she is an “alien” in this world, hers. Geraldine’s necklace is another clue as it represents the symbol of SWORD, a spy organization responsible for good relations between aliens and Earth. This symbol also appeared on the combination of the beekeeper coming out of the sewers and the red helicopter in the hedge. Presumably the SWORD is watching Wanda on the show and maybe trying to bring her back to reality. This is probably why Wanda drives Geraldine out of her bladder.

Wanda is overwhelmed by emotions and begins to sing a nursery rhyme from her childhood to her two sons. However, Wanda had already resumed her Socovian accent shortly before, which can be heard particularly well when she pronounces the name “Pietro”. This scene also shows Wanda crying for the first time. Geraldine will take advantage of this apparent weakness to talk to her about Pietro’s death, but Wanda is obviously trying to suppress all of this.

# 12 the discussions between Kraut and Agnès

As we’ve seen before, Agnes and Herb revealed that Geraldine wasn’t from here. Moreover, it looks like they are trying to show vision that this world is unreal, but Agnes tells Herb not to say it out loud. Does she expect retribution if Wanda hears this? In either case, a threat hangs over those who seek to reveal the truth.

The words the doctor says when speaking with vision are also full of allusions. Vision asks the doctor if he wants to leave despite what just happened, and the doctor replies:

In fact, I don’t think we’re going to go. Small towns are like fortresses. Difficult to escape.

Sight is surprised when hearing these words. This is another metaphor to remember the prison that Wanda created.

We understand that Wanda and Vision’s charming home in Westview isn’t exactly that peaceful and charming. Westview appears to be a projection or a kind of bubble that a typical small town is in. Regarding its residents, one has to wonder if they are aware of the unreality of this city and if they are real people and very much alive. Agnes and Herb’s confessions show us that the characters, real or not, know they are locked up in a place, and Geraldine’s words, coupled with the fact that she was expelled from the “Wanda Bubble”. Prove to us that Geraldine was definitely very real. The other characters may just be Wanda’s creations, but they still understand that something is wrong. If you are interested in learning more about the world of Westview, we invite you to read our other article on the same subject which is in more detail on this particular point.

Regardless, we currently do not know whether Wanda Westview “created” herself to live her life as she dreamed, or whether someone is forcibly holding her back in this fictional universe. We’ll be looking for details in future episodes to answer this question as soon as possible.