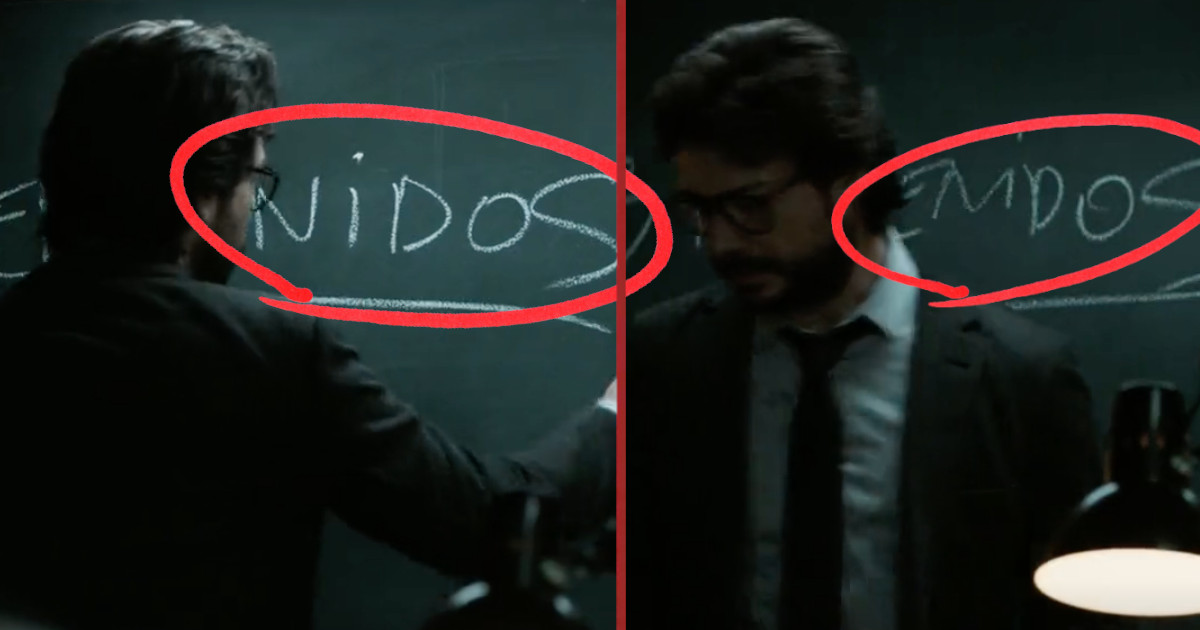 The Netflix series La Casa de Papel, with its 5 seasons and 48 episodes, has been one of the most popular shows on the streaming platform since it started in 2017. A real success, especially the most watched series on platforms in France in 2020.

However, it is not exempt from some errors. In addition to its gradual breathlessness over the seasons and lack of inspiration, the most famous of the Heist series has also suffered several false connections and mistakes. Here are some who have not failed to alert the most vigilant of you.

Let’s start from the beginning. In the very first episode, when the professor has gathered his great team in a classroom, the professor introduces himself and greets Tokyo, Rio and the others with a “Bienvenidos” (Welcome in Spanish) written on the board. But after a change of plan, it seems to turn into “Bienvemidos” which means absolutely nothing. Big mistake? No, in reality the “N” merges with the “I” in the background, which can fool our eyes.

Also in episode 1 of season 1 (definitely), when Denver throws himself on a huge pile of banknotes, he drops 2 bundles in front of him and 4 to his right. On another level, however, there is only one left. Give the money back to Denver, or rather, give the money back to the props.

In Season 1 Episode 8, Nikolai, the Russian pest who saw the professor’s face, is tasked with providing his composite portrait to the police. Threatened by the latter, Nikolai has the luxury of putting it out in front of the inspectors present. The police therefore cannot find out the professor’s identity. But they could not only have seen it, but also easily reconstructed it or even go back. Unless the software is from another age.

This time season 2. When Tokyo handed the drug to a Berliner strapped to a chair at the beginning of episode 2, after a change of plan, she held it in her left hand. A classic mistake that can be seen in many series and films.

In episode 7 of the second season, it is Inspector Raquel Murillo’s jacket that disappears after another change of plan when she climbs onto a tractor in the middle of nowhere. We could also mention the reversal of the beer bottle and glass in the inverted shot when the professor speaks to the inspector in episode 5 of season 2, always.

Last false connection (or rather casting mistake?) This season 2 the lifeless body of Moscow, presented on Spanish public television, experiences the ease of interpretation of its actor Paco Tous, as we see him inhale several times as the shots follow one another. No problem, the series has never shone with its severity and thoroughness. This flaw was discovered in the Faux Raccord N ° 309 program by our colleagues at Allociné.

Would Denver have changed its name during the series? If so, it was never mentioned. In the first seasons, Denver is called Ricardo. But during season four, transgender character Manila lovingly calls him “Dani”.

At the end of the season, the character from Marseille arrives in Algeria in no time while leaving … Madrid, that is, crossing a good part of Spain as well as the Mediterranean. Although a Madrid-Algiers flight can be made quickly, time does not seem to be respected here.

In season 5, when Denver tries to convince injured Tokyo to go with him and Manila, it’s her headset that is lost after a change of plan. Denver is determined to be at the center of the mistakes of the Spanish series.

Detective Alicia Sierra, played by Najwa Nimri, who wants to hunt down the band of robbers, owns a cat. In the final episode of the fourth season, she gives it to a man before leaving her apartment. Nevertheless, the same animal seems to appear in the second part of the fifth season, when Alicia Sierra and the professor are hidden in an apartment so as not to be caught by the police with the flu. Wink or real dumplings? This information was reported by the YouTube channel TuttoCia.

Other misunderstandings and mistakes of all kinds abound at La Casa De Papel. Don’t hesitate to share your findings in the comments. You can also find our selection for the second season of Lupine here.

Netanyahu heads to the Emirates for the first time | Free press