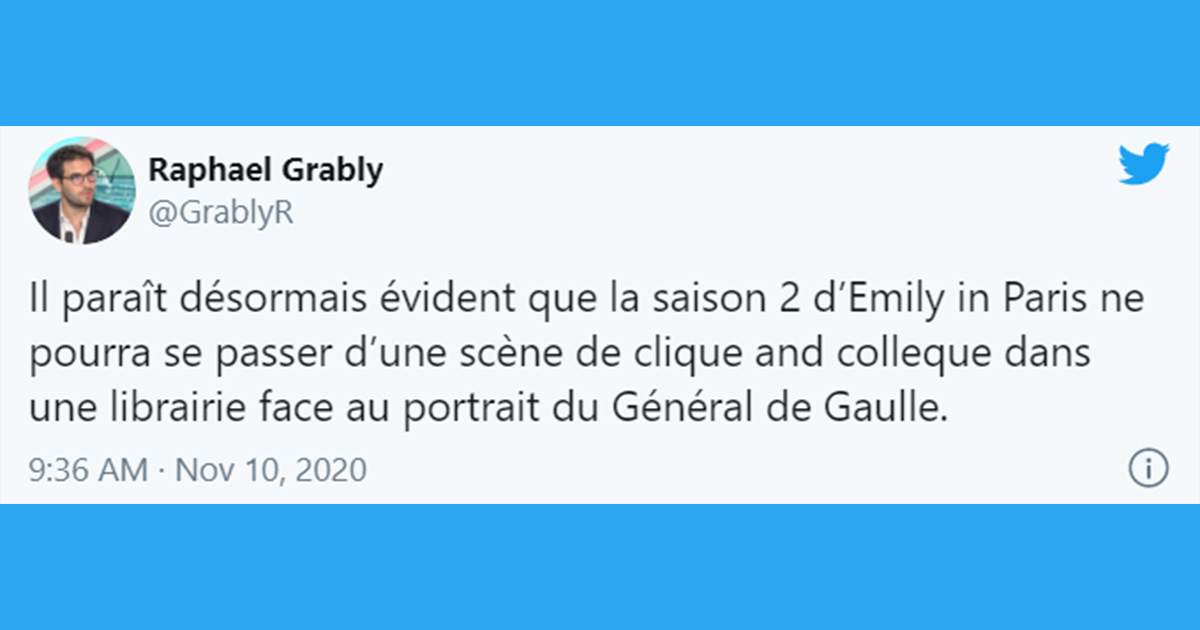 Netflix announced it to us last night that the series Emily in Paris would be extended for a second season. On Twitter, internet users grabbed their keyboard to sometimes congratulate the famous streaming platform on the decision to sometimes face Netflix by claiming the continuation of many other series that were considered more interesting.

Forgive the Fwanssai: Emily In Paris will be back for a 2nd season. Pic.twitter.com/NrjpzKHtDy

And you, where are you in this debate? We previously offered you top tweets with the best reactions from the first season of the series. Now, here are the top tweets with the best ideas you had for the upcoming second season of Emily in Paris. We can say it: the series inspired the French, but also various international viewers who decidedly struggled with French lessons.

Ptdr during the final episode of Emily in Paris, I really thought we were going to play Emily in Normandy in season two

It now seems obvious that the second season of Emily in Paris couldn’t do without a clique and gathering scene at a bookstore facing the portrait of General de Gaulle.

# 3 wendez-wous in the wai pawis

# 4 Emily in a tiny, unsanitary apartment and not a nice cheap studio

I have a lot of ideas for the second season of #EmilyInParis. For example: With the Covid crisis, the agency closes and has to switch to a JFT in Clignancourt. Hire me as a writer @NetflixFR

# 6 where is that petition? Bring him to us!

Petition to replace the second season of Emily in Paris with Omelette Man in Paris.

I have two people from my TL who live tweet what they see. One is Emily in Paris, the other a leprechaun and I keep confusing the two, which creates the most ambitious crossover anyone has ever imagined.

# 9 When Americans are fed up with Netlix’s French classes

# 10 Season 2 just expected by fans to see Gabriel again? of course not…

#EmilyInParis has been renewed for an s2 … HE’S COMING BACK TO ME. I SOB. pic.twitter.com/Ow4UUk5b2l

# 11 in France, we don’t really like learning things about ourselves

Emily hasn’t taught us all about our habits yet, we French @NetflixFR renewed Emily in Paris for a season 2 pic.twitter.com/VvgOjIQVtO

Given the reactions to #EmilyInParis criticizing the series for its lack of realism, @NetflixFR kicks off season two, Emily, in Trou à merde.

The story of an obese American who discovered the Paris filth. pic.twitter.com/ioHKjT54JR

#EmilyInParis was renewed, but Netflix canceled

one day at a time
Santa Clarita Diet
everything sucks

and many other better shows

Emily in Paris – The heroine will be “much better integrated in Paris in season 2”, promises the showrunner and will fight in particular against “the bike paths of the anti-Bagnole-Bobo-Gauchiasse of Mayor Hidaldingue”. pic.twitter.com/FFvMxcuHLQ

SANTA CLARITA DIET HAS BEEN CANCELED

BONUS: The tweet in Portuguese that made us laugh

The French see Emily renewed in Paris, despite all her tears.

Guys, I ruled out a little. Season 2 of #EmilyInParis has already been filmed, there will even be Debby Ryan in it (I took part in the filming), let’s go

Explosion on Iranian ship in the Red Sea | Free press