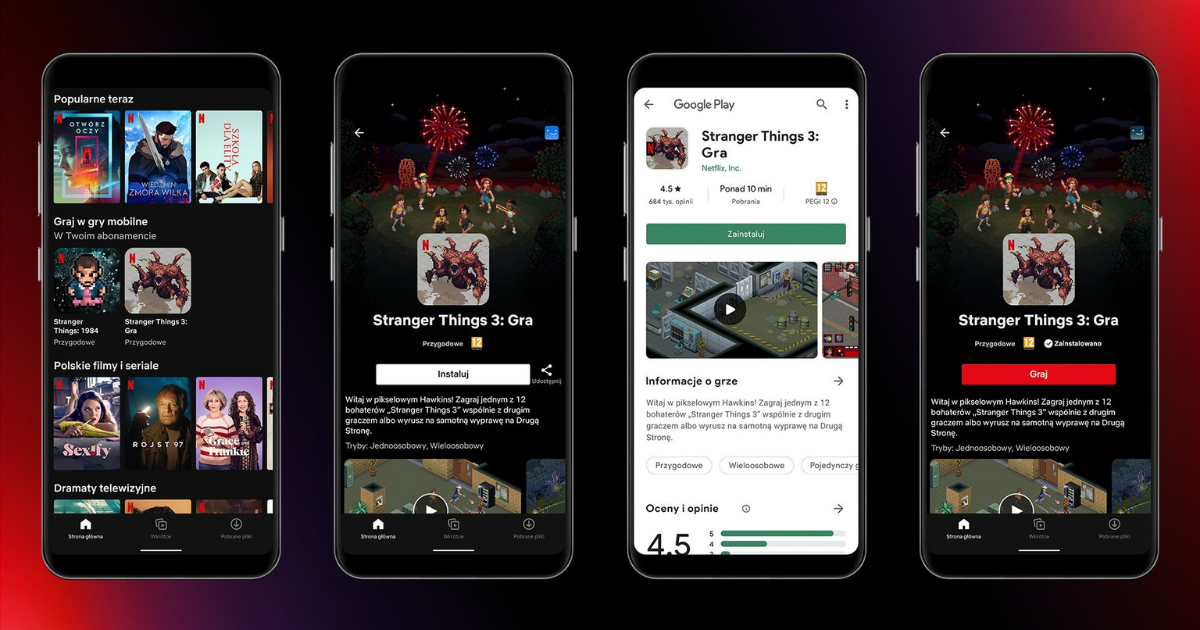 A few months ago we revealed Netflix’s ambitions to get into the video game sector, which is now complete as the platform recently added a first batch of mobile games to its streaming service.

a service still in the “beta test”

So, true to its word, Netflix launched its foray into the gaming industry this summer. The first two games available are Stranger Things: 1984 and Stranger Things 3. The advantage here is that you can play it with no ads, no additional fees, and no microtransactions.

But the vast majority of Netflix’s 209 million subscribers do not yet have access, as the games were only launched in Poland and are only available there. Some have tried connecting to servers in Warsaw via VPNs to access the games, but seemingly to no avail.

Currently, the games are only being tested on Android devices. And based on the officially released images, it appears that the games don’t need to be streamed directly to the device, but must be downloaded from the Google Play Store via the Netflix app and then accessed by logging into the user’s Netflix account.

Today, members in Poland can try Netflix mobile games on Android with two games […]. This is really just the beginning and we still have a lot to do in the months ahead, but it is the first step.

Netflix and its diversification strategy

When Netflix confirmed its desire to expand into the world of video games earlier this year, it was not yet clear to what extent the market entry would be felt. But the platform has shown that it is capable of seriously positioning itself in the markets. With an ambition to expand into home console games, this would be the biggest expansion into a new breed of entertainment since its streaming debut in 2007 and its first original show in 2012.

And while you might think that Netflix is ​​moving away from its core business as it enters gaming, the platform has long emphasized that its competition goes beyond TV and movie companies. In January 2019, Reed Hastings, founder and co-CEO of Netflix, said the following:

And his entry into the video game arena makes sense in many ways. Netflix has a growing amount of original content to fall back on. If not everything is suitable for a traditional gaming experience (for example The Crown or Bridgerton), we can well imagine extended gaming experiences around titles such as Sweet Tooth, Warrior Nun or the animated series Pacific Rim: The Black. . However, don’t expect mobile versions of The Witcher on Netflix as it obviously clashes with existing games on PC and consoles.

So if Netflix continues to enrich and expand its games catalog, it might justify the price increase and soothe the growing anger of its subscribers.