the 19 things and details to remember in this episode 3 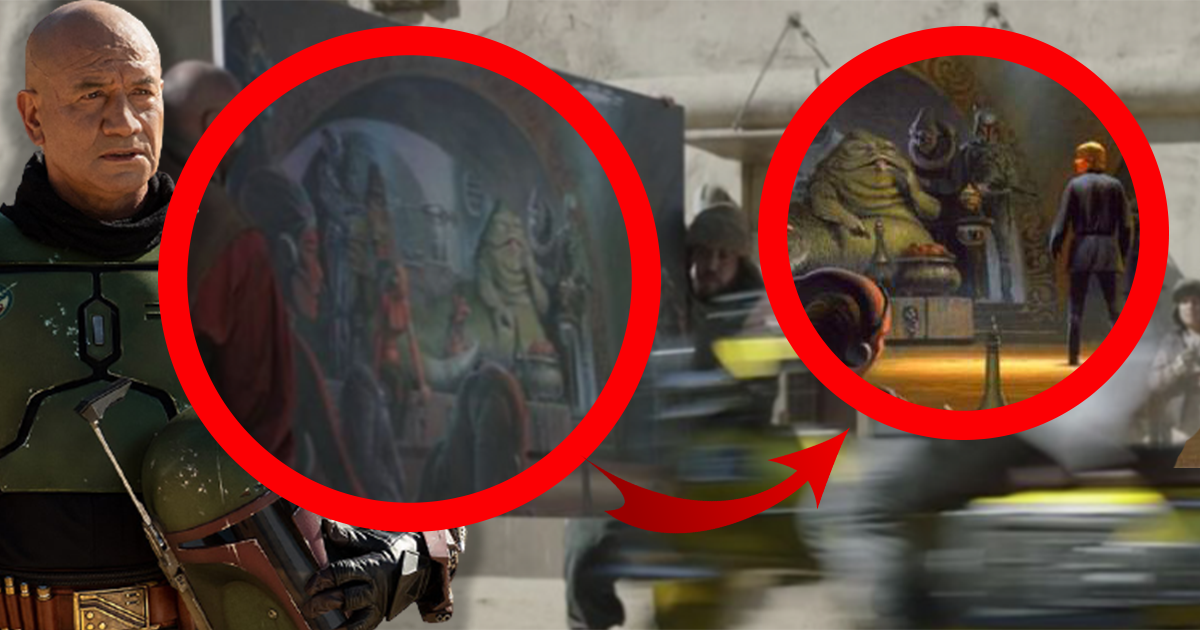 Episode 3 of the series The Book of Boba Fett has been out on Disney + since last Wednesday and has generated a lot of comments on Twitter (not always very pleasant, by the way). Whether you liked this episode or not, today we invite you to discover the 19 things, details, references, and Easter eggs to remember in this third episode.

WARNING: This article contains loot for the third episode of the The Book of Boba Fett series. Don’t read any further if you don’t want to read it.

Episode 3 of the series begins with a strange spider-like droid crawling in the sand in front of the palace of Jabba the Hutt. This creature is known as the monk B’Omarr. It is a religious order whose members put the brain in a vessel with nutrient fluid, a brain that is guided by 6 mechanical legs. This brain communicates with the other members of the order through telepathy. We do know, however, that the Palace of Jabba once dominated the B’Omarr Monastery, so it is not very surprising to see one in the area.

As with the first 2 episodes, this episode 3 has many cameos and mentions of aliens. 8D8 refers to the Trandoshans, Aqualishs, and Klatoonians before Boba Fett met Jawas several times in the episode.

Aqualishs and Trandoshans also lurk in the back of Mos Espa, and among those carrying the Hutt twins are a Weequay, a Nikto, and a Twi’lek.

Additionally, a couple of royal bith and hassks are nearly crushed during episode 3’s speeder hunt.

3) a connection with Luke Skywalker

Lortha Peel, who works as a broker for Tatooines Moisture Growers, seeks an audience with Boba Fett. Before Luke Skywalker became the hero of the galaxy, he lived and worked with his Uncle Owen and Aunt Beru, two moisture growers. Maybe Peel did business with Owen before A New Hope? We’ll surely find out later.

4) a conversation that doesn’t fall apart

When Boba Fett and Lortha Peel talk to each other, Boba Fett explains: “I grew up surrounded by water”, alluding to his youth on Kamino in Attack of the Clones. Lortha Peel then replies, “Tatooine was once covered by water,” which further reinforces the legends present in the Star Wars universe where we learn that the sands of Tatooine were once oceans.

5) a reference to Season 1 of the Mandalorian

When Din Djarin steps into Mos Eisley in season 1 of The Mandalorian, he walks past an exhibition of stormtrooper helmets mounted on pikes to celebrate the fall of the Empire. The flashback of Boba Fett Book Season 3 shows how this “creation” is built when Boba Fett visits the Pyke Syndicate.

In episode 3, did you notice Peli Motto, the Mos Eisley engineer who helped Din Djarin on The Mandalorian series? You can see Peli Motto, previously played by Amy Sedaris, walking her droids while Boba steps into Mos Eisley during a flashback.

We dedicated an earlier article to this cute cameo.

7) a reference to Oba Diah

The Pyke Syndicate clearly plays a bigger role in The Book of Boba Fett than what we’re currently being shown. Mos Eisley’s flashback from Episode 3 relates to her home planet Oba Diah. The planet Pyke first appeared in Star Wars: The Clone Wars and was mentioned by The Bad Batch.

On the way home from Mos Eisley, Boba Fett notices a suspicious puff of smoke from the Tuskens camp he has just left. Boba Fett later discovers that the camp had been reduced to rubble by the Nikto gang he previously fought. The overall construction of this sequence seems to evoke the memory of Luke Skywalker, who found his uncle and aunt burned by the soldiers.

When he arrives at Jabba’s palace to beat up a sleeping Boba Fett (a nod to Boba insulting him for his cowardice in the previous episode), Black Krrsantan hits his target with electrified knuckles. These weapons are most likely inspired by Krrsantan’s appearances in the Star Wars comics. The latter actually had metal plates surgically implanted under his joints.

In Season 1 of The Mandalorian, Din Djarin acquired a coveted set of Whistling Birds missiles that aim explosives that attack large numbers of enemies at once. In episode 3 of the series, while fighting the Black Krrsantan, we can see Boba Fett’s Whistling Bird device. One of these distinctive missiles was used during the combat sequence of Episode 1 of the series against one of the assassins who tried to escape.

Fennec Shand sends Black Krrsantan into the rancor pit and throws a knife from a secret compartment in the butt of his blaster rifle. This blade was already used by his character on his season 1 debut of The Mandalorian and he was then thrown towards the Toro Calican.

After capturing Black Krrsantan, Boba Fett and Fennec Shand enjoy a hearty feast of several Easter eggs. The roasted creature surrounded by vegetables is a nuna (first seen in The Phantom Menace), and the blue liquid is most likely the Star Wars liquor known as “Spotchka”. This drink was prized by Fennec Shand after his boss took the throne of Jabba the Hutt in season 2 of The Mandalorian.

13) the surprising appearance of Danny Trejo

As an excuse, the Hutt twins offer Boba Fett his own pet grudges. The creature is accompanied by a trainer, and the character is played by none other than Danny Trejo. And the latter appears in all of Robert Rodriguez’s productions because they are both good friends.

14) Boba admits his past mistakes

Upon rescuing Black Krrsantan, Boba Fett confesses to the Wookiee: “Believe the experience of a former bounty hunter: don’t work for crooks”. This derogatory term has been used earlier (in The Mandalorian), but this line has a deeper purpose. By “crooks” Boba probably means Jabba the Hutt and Darth Vader. Working for this duo ended with a trip to the Sarlacc Fountain for the bounty hunter, and Boba Fett appears to have learned his lesson.

According to the character played by Danny Trejo, Rancors are emotional creatures that form a strong bond with the first person they see, usually their trainer. This explains why Jabba’s Rancor Keeper was so desperate after Luke Skywalker smashed the beast in Return of the Jedi.

16) the witches of Dathomir

Danny Trejo’s character also mentions the “Witches of Dathomir” who ride rancors as noble steeds. His line refers to Dave Wolverton’s novel The Courtship of Princess Leia, which introduced witches to the mythology of George Lucas. Force-sensitive Witches of Dathomir using rancors as mounts are a long-established concept in the Star Wars Legends universe, but The Book of Boba Fett has now anchored that detail in the Canon universe.

17) a creature soon to be in the Star Wars canon

By asking Danny Trejo to teach him to ride the rancor, Boba Fett claims to have ridden beasts “ten times bigger than him”. Could it be that he was referring to the animal from the infamous 1978 Star Wars television movie? When he started, Boba Fett rode a Diplodocus-type Ichthyodont, much larger than a Rancor. Of course, that doesn’t mean this story has become canonical (which George Lucas never intended), but it’s a lovely Easter egg nonetheless.

After Fennec Shand discovered that Mayor Mok Shaiz and his butler ran away in a very suspicious manner, Fennec Shand casts the curse “thanks farrik!” That phrase has become a common curse in the Star Wars universe (especially in the mouth of Fennec Shand) thanks to The Mandalorian.

One of the best Easter eggs of Episode 3 of The Book of Boba Fett series is hands down the painting that one of the teenagers from Boba’s gang went through when crashing during the final chase. Not only does the artwork show Jabba the Hutt on his throne, it’s actually a replica of a painting by iconic Star Wars concept artist Ralph McQuarrie (but without Luke Skywalker, as you can see below):

And you, what did you think of this third episode? We’ll let you answer this question in our comment area! And if you want to know which character on the series would be transgender according to internet users, you can consult our previous article on the subject.