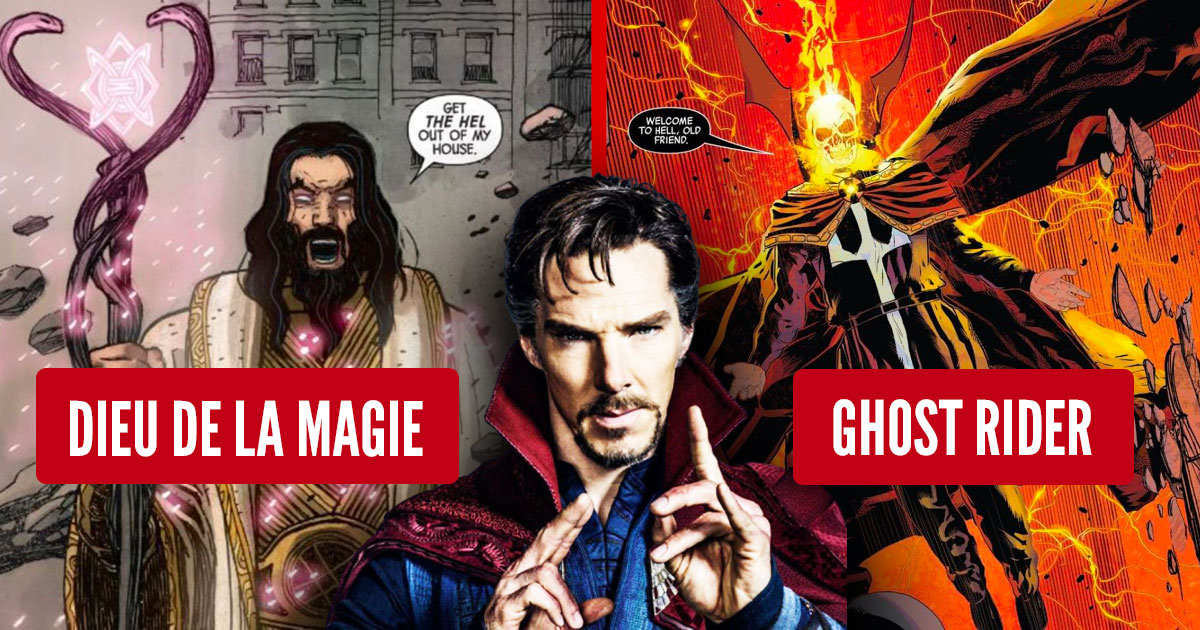 Sometimes armed with powerful magical artifacts, sometimes based on some of Marvel’s other superheroes, Doctor Strange has made many appearances over the centuries. In the comics it has also happened that our dear Supreme Sorcerer doesn’t look at all like the image we normally have of him, for example biased by his representation in the MCU. How does it look like? We’re going to show you through these 10 completely wacky alternate versions.

The Infinity Warps series envisioned what the Marvel Universe would have looked like if several of its heroes had merged together. Therefore, among one of the options considered by the comics, we find Stephen Rogers, the result of a strange mix between Doctor Strange and Captain America, as you must have guessed.

Stephen Rogers had strange experiences during World War II that turned him into the Supreme Soldier. Thanks to his many powers, he then becomes the mystical protector of the earth, accompanied by Bucky Wong (mix of Bucky Barnes / Wong) and Dum Dum Fury (mix of Dum Dum Dugan / Nick Fury).

While Stephen Strange lost everything in The God of Magic, he has to face the terrible Loki. To defeat the god of malice, the Sorcerer Supreme rushes headlong into battle and does not shrink from sacrifice. To bring his revenge to life, Doctor Strange goes down a dark and winding road. Among other things, the hero awakens Sentry and borrows the powers of the Yggdrasil World Tree.

In this way he will gain immeasurable power. At the same time he transforms into the god of magic and has a new look. Then it becomes unstoppable. Finally, until his former assistant finally intervenes …

In the parallel universe of Earth-1298, Doctor Strange no longer looks like the wizard we know. And for good reason, in this alternate reality, Stephen Strange was struck by the curse of the man-thing and came to his friend Dr. Ted Sallis to help.

If then he just seems to be a darker version of Doctor Strange than we’re used to, the wizard is actually hiding a monstrous face under his hood, similar to the one normally seen on Man-Thing.

The Damnation event allowed us to discover Stephen Strange in a form that was as strange as it was devilishly exciting. While trying to rehabilitate the destroyed city of Las Vegas, the Master of the Mystical Arts mistakenly opens a portal to the domain of Mephisto.

This terrible mistake leads to his being possessed by the demon, who then turns him into a vengeful ghost with a flaming skull. The task will then fall to his loyal ally Kong to fight him with the aim of finally getting him to listen to reason.

To increase their respective sales, Marvel and DC have partnered with the Amalgam series. The aim of the project at the time was to combine the best of both worlds. Obviously, this is the amalgamation of several legendary superheroes straight from the little comic book world.

Thanks to Amalgam, we’ve been able to discover new and unprecedented characters born from some of our favorite superheroes. This is how Doctor StrangeFate was born. The wizard is one of the strongest characters born from the union of the two houses, corresponding to the merging of the heroes: Doctor Strange, Doctor Fate and Professor Xavier. So it’s no wonder that the Super is considered one of the most powerful characters ever created in this universe …

By exploring the various alternate realities of Marvel, we quickly understand that the character of Doctor Strange went through a large number of adventures punctuated by interesting twists and turns. In Secret Wars: Battleworld, for example, the master of the mystical arts is brought into possession of the corpse of Frank Castle after being bitten by vampires.

The Punisher, now one with the wizard, will then show audacity and ingenuity in his newly acquired mastery of magic. This will lead to even more explosive battles than the ones the antihero had us accustomed to.

So far we’ve only brought you male versions of our good ol ‘Doctor Strange. However, it has happened that in some comics the hero is actually not one, but a very pretty and talented Supreme Witch. Jeannie, who also calls herself Strange in his universe, is the perfect example.

The young woman then corresponds to Doctor Strange of the year 2099 and is also one of the most powerful figures who have never carried this title. Jeannie secretly shares her body with a demon for good reason.

To face the wrath of the Hulk, who had defeated him for the first time, Doctor Strange had no choice but to ask the terrible zom to prevail. By ingesting the amphora in which his enemy had been sealed, the wizard gained his powers and increased his skills ten times.

As a reminder, Zom is a terrible demon whose sole aim is destruction. His power largely corresponds to that of Doctor Strange as well as the most learned wizards in the universe.

In the Marvel Universe, Tony Stark does not have a monopoly on brand new armor. No, we’re not going to be talking about War Machine or even Iron Heart here, but Doctor Strange. It will surprise more than one, but the Sorcerer Supreme was indeed the proud owner of armor given to him by Dr. Doom was sent.

During the events of the Savage Avengers series, the master of the mystical arts and Conan Kulan Gath must face themselves. In the confrontation between them and the magician, they received the help of the famous Dr. Doom. When Strange finds himself in dire straits, Doom will send him armor that will save him from certain death and allow him to use the situation to his advantage. At that very moment, Doctor Strange becomes Iron Mage.

Like the rest of his fellow heroes, Doctor Stephen Strange did not escape the zombie virus that hit Earth-2149. Although he survived quite a while, the wizard inevitably turns into a putrid, cannibalistic creature.

However, unlike the other heroes, this process won’t make him particularly strong. On the contrary, the cunning wizard turns into a zombie without much interest, looking for nothing more than to find something to eat.

Do you always want to learn more about the Marvel Universe? Find out in a special article which Infinity Stone is the most powerful according to Iron Man and why.

Who voted for the leader of Chega? “Not welcome” to the Amplifest Festival