Mining and metallurgy hold a prominent share in terms of consumption of sodium cyanide, oing to increased adoption in gold and silver mining. Sodium cyanide is also used in a wide range of applications such as pesticides, dyes & pigments, chemical synthesis, pharmaceuticals, and others, which bodes well for market expansion over the coming years.

As such, the global sodium cyanide market is anticipated to expand at a steady CAGR of over 4%, and be valued close to US$ 3 Bn by the end of 2030.

Get Sample Copy Of This Report@  https://www.persistencemarketresearch.com/samples/17776 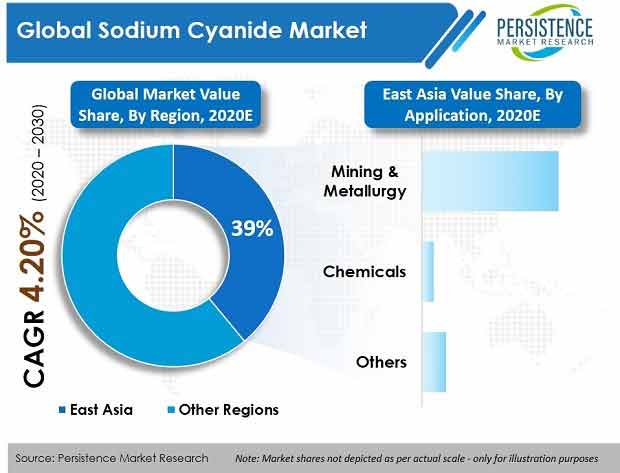 “Local and foreign investments in regions such as Latin America, for gold and silver extraction, have been increasing, which, in turn, is driving demand for sodium cyanide. Per ton consumption of sodium cyanide for gold processing is increasing as the average content of gold is declining gradually,” says a PMR analyst.

The global sodium cyanide market is fairly consolidated at both, global and regional levels. Tier-1 manufacturers account for more than half of the market. Some leading players included in the report are Cyanco International, LLC, The Chemours Company, Australia Gold Reagents, Orica Chemicals Pty., Korund, Sasol, Hebei Chengxin, TaeKwang Industry Co. Ltd, Anhui Shuguganag Chemical, CyPlus Idesa S.A.P.I. de C.V., and others. To gain a competitive advantage in this industry, market participants are involved in expansion, merger, and acquisition activities.

You Can Checkout This Complete Report@  https://www.persistencemarketresearch.com/checkout/17776

Persistence Market Research is here to provide companies a one-stop solution with regards to bettering customer experience. It does engage in gathering appropriate feedback after getting through personalized customer interactions for adding value to customers’ experience by acting as the “missing” link between “customer relationships” and “business outcomes’. The best possible returns are assured therein.

The Nebulizer Devices Market To Witness Dynamic Growth With Innovations