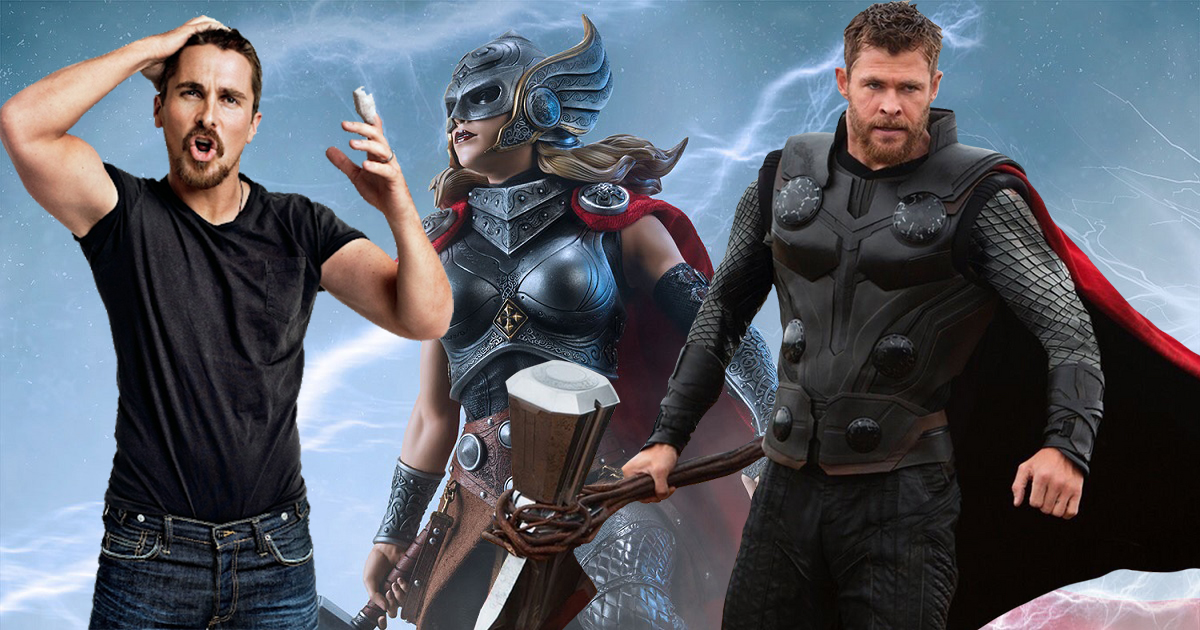 It happens (many, many times) that the MCU doesn’t follow the original plot of the comics and creates a surprise. Unfortunately, this sometimes creates complications in future films and the introduction of new characters. We are in this particular case for Thor: Love & Thunder and the introduction of Christian Bale’s character Gorr. We explain why.

the story of All-Black in the comics

To understand the MCU problem for Thor 4, one must first look at the story of a weapon called “All-Black The Necrosword” in the comics. The first symbiote, called “All-Black”, manifested itself in the shadow of the evil deity Knull. Quickly taking the form of a sword made out of darkness, All-Black is wielded by Knull, earning him the nicknames Necrosword and Godslayer. After Knull was incapacitated during a battle against a group of powerful gods, All-Black left him and bonded with an alien named Gorr. The latter then unwittingly followed in Knull’s footsteps and killed gods throughout the cosmos with his new weapon and received the title of “butcher god”.

All-Black fed on the blood of slain gods and corrupted Gorr, who became an immortal evil god himself, with abilities similar to those Knull once possessed. All-Black has become the subject of countless stories and legends as a result of the murders committed by Knull and Gorr, but his true story is recorded in a divine book called The Saga of the Butcher God. In other words, All-Black is sensitive and has its own malicious will. Although subordinate to its creator Knull, this weapon seeks to complete its program of removing all life from the universe (and especially destroying the gods). Like the other symbiots, All-Black can communicate with its hosts and try to corrupt them.

Christian Bale will be gorr in the next Thor

As you know, we learned on December 14th that Christian Bale will play Gorr, the hunter of the gods, in Thor 4. To bring you some additional details about the character of Gorr in the comics, you should know that he has an intense hatred of the gods who never came to his aid when his family was wiped out and famine made their lives impossible.

He can’t take revenge until he’s merged with the Nekrosword (the weapon we mentioned earlier). Gorr will therefore not stop hunting and killing the gods in different galaxies, and has done so for more than a millennium. The disappearance of many gods will alert Thor, who will inevitably have to grapple with Gorr in the long run. However, it is difficult to compete with Gorr, who has the ultimate weapon against the gods. The latter, in addition to its ability to kill gods, can even create wings that fly at formidable speeds.

All black in the hands of Christian Bale?

With the history of the comics, we tell ourselves that Christian Bale absolutely needs to have All-Black on his hands in Thor 4, but it’s a little more complicated. The MCU actually already introduced the weapon by merging Thor: Ragnarok, Night Sword (Hela’s preferred weapon in the comics) with All-Black. Incidentally, that made Hela particularly powerful.

So that’s the whole problem the MCU is facing now: How can Thor: Love & Thunder envision the character of Gorr when his weapon, which is all his strength, has already been presented (in a different way) and not in his Hands lies? This scenario problem can be solved with different solutions. For starters, Gorr could be a whole new character with little to do with the character from the comics other than his willingness to kill gods. The hypothesis seems unlikely to us, however. Conversely, we can also imagine the MCU creating a narrative connection between Hela and Gorr instead.

The possible connection between Hela and Gorr in Thor 4

At the end of Thor: Ragnarok, Hela is believed to be dead, but that’s just a guess. It is possible that she survived despite being badly injured. But let’s bet it’s out of the way now. The first photos from the set of Thor: Love & Thunder seem to indicate that Gorr’s origins will be remembered in the film. They could easily be rewritten to include Hela.

In the comics, Gorr finds All-Black when he faces the corpses of two gods who tried to kill each other. In the MCU, Gorr might trip over Hela’s body and steal his weapon. So there would be no disturbing similarities between Gorr’s weapon and Hela’s weapon. Introducing a new weapon with the arrival of Gorr would indeed be a chore as it would be too similar to Hela’s. It is certainly the most logical choice the MCU could make to address this issue so that there is only one weapon instead of two. So it is certain that Hela and Gorr will be linked in one way or another in Thor 4.

If you enjoyed this article and want to learn more about Thor 4, we invite you to read our full article for the latest information about it.