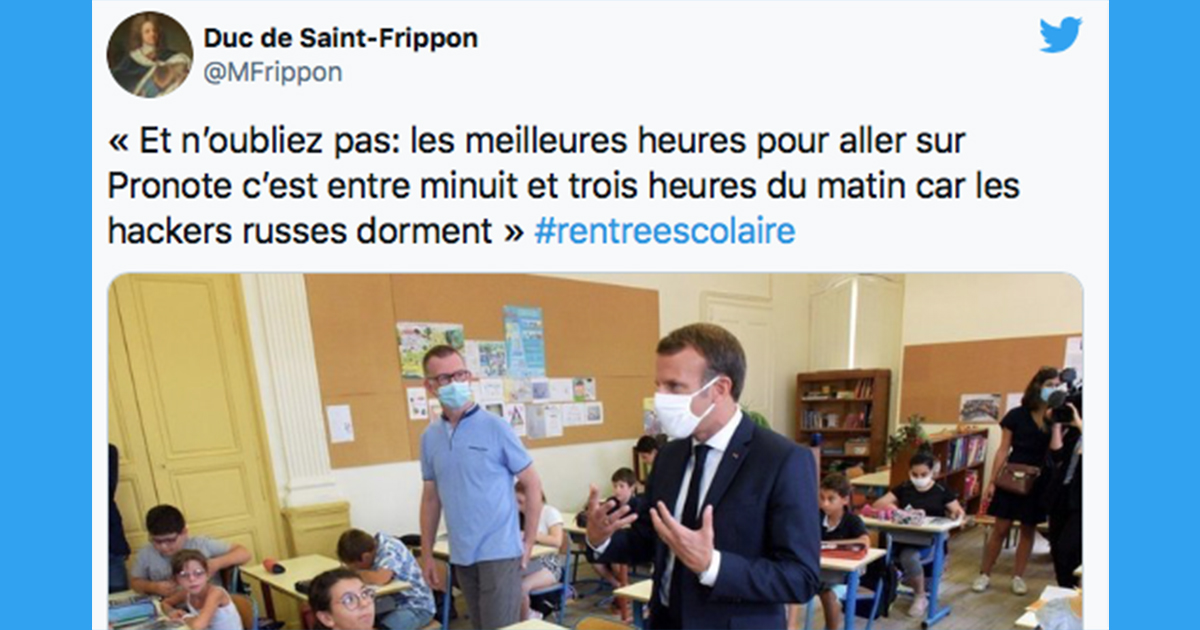 This Monday, April 26th, we celebrated the start of the school year. While Emmanuel Macron was visiting a school in Melun today, internet users on Twitter had a great time discussing the conditions under which children and teenagers are returning to school. As you will see, many of the tweets you will read are about the Cned and Russian hacking affairs. In fact, a new computer attack that seriously disrupted Cned’s services was to be regretted in mid-March. Jean-Michel Blanquer then accused hackers from Russia, which caused a stir on the Internet. So those back to school were an opportunity for internet users to offer tweets that are as resourceful as they are funny, and here is a small compilation of them!

“And don’t forget: the best hours for Pronote are between midnight and three in the morning because Russian hackers are sleeping” #rentreescolaire pic.twitter.com/eawX4VrcIT

The students who got up at 8 a.m. to finally see that the CNED wasn’t working #rentreescolaire pic.twitter.com/DuXeQZWZBW

As with every #rentreescolaire in France, the enemies of the free world planning to overthrow #Blanquer celebrate their offensive against the cned servers. https://t.co/tuyQOm68bw pic.twitter.com/ILzINYpBpI

The Blanquer coast when we see he hasn’t canceled the Bac tests yet #BlanquerDemission #rentreescolaire pic.twitter.com/LUW852XEL8

Blanquer: “It is good that we have made every effort to stop the virus from spreading in school.”
…
The action taken …. # BlanquerDemission # teacher #rentreescolaire pic.twitter.com/OcNXfai5b1

A little thought in passing for the Russian hackers who are going to school again this morning.

The CNED not working on the day of #rentreescolaire pic.twitter.com/itCTqQ5Nnd

For fans of humorous tweets, don’t forget our top 15 tweets from the last week.