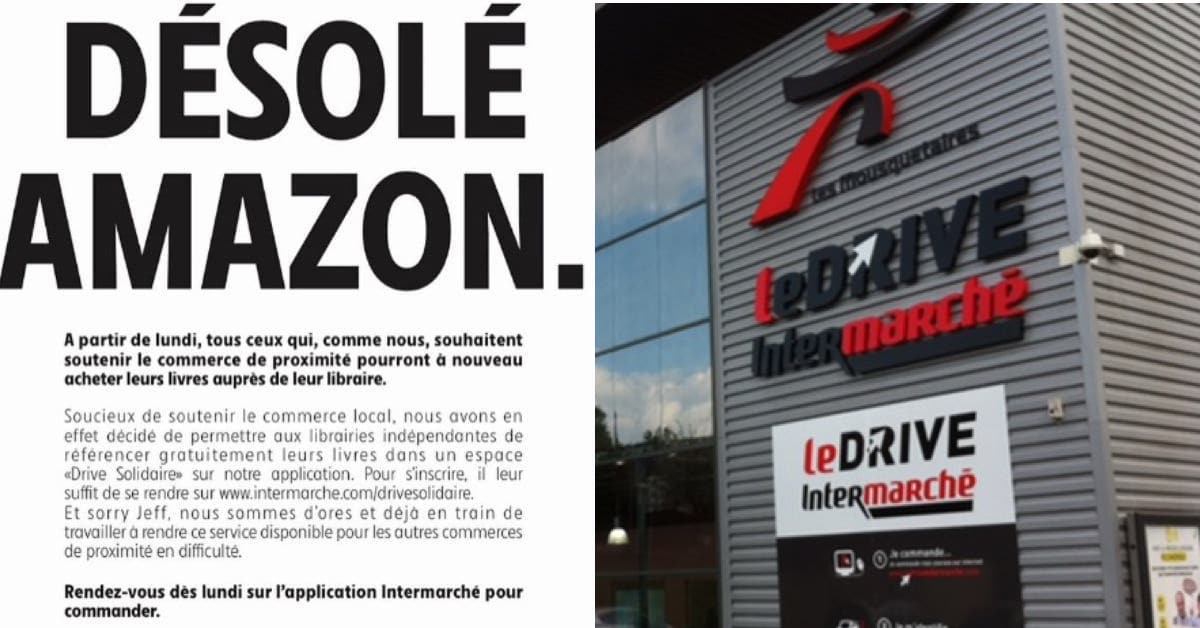 The first containment had already been a very complicated time for small retailers, and we recall that the fact that Amazon had continued to deliver had redesigned its delivery system to focus on priority products. Today, with this second restriction in France, many elected officials and merchants believe that the physical store closures will necessarily benefit Amazon. In the last few days the anger against the e-commerce giant has come from booksellers who are forced to close the curtain while the American can ensure the orders and deliveries of books … Thus the reaction is organized and it is intermarché Solidarity initiative.

Indeed, the Intermarché group has decided to help small traders who are hard hit by the health crisis and the administrative closures of their companies. This Thursday, the French brand revealed its plan through a supplement published in the local and national press. A text with the title “Sorry Amazon”

The sales group explains that starting this Monday, November 9th, the marketplace will be available free of charge to local businesses by setting up a Solidarity Drive. This service is initially only offered to booksellers and then made available to all other companies so that they can sell their stocks.

As the group’s president, Thierry Cotillard, told AFP, “Small businesses are not ready for digitization and Click & Collect”. This allows retailers to use Intermarché’s digital tools, developed by the French start-up Mirakl, to place orders and they can be picked up directly at their branches.

As of Monday, booksellers can therefore offer their stocks in the 1,500 drives in France.

Of course, the operation is clearly aimed at Jeff Bezos, the CEO of Amazon. In addition, we can read in the Intermarché supplement:

Sorry Jeff, we’re already working on making this service available to other local businesses in trouble.

Remember, Thierry Cotillard does not want to “pose as a painful loser” but believes that Amazon could allow the group to urge him to “accelerate our digital transition”. In addition, the CEO claims “real tax justice” for Amazon, which pays € 420 million in taxes in France but is often seen as tax-advantageous compared to distributors.

For its part, Carrefour announced this week that by the end of the year it will be offering its market subscription to companies selling groceries, hygiene, pet stores and grocery stores, childcare and able to ensure deliveries across France.

Berlin for May 1 – Peaceful Protest in Wedding | Free press