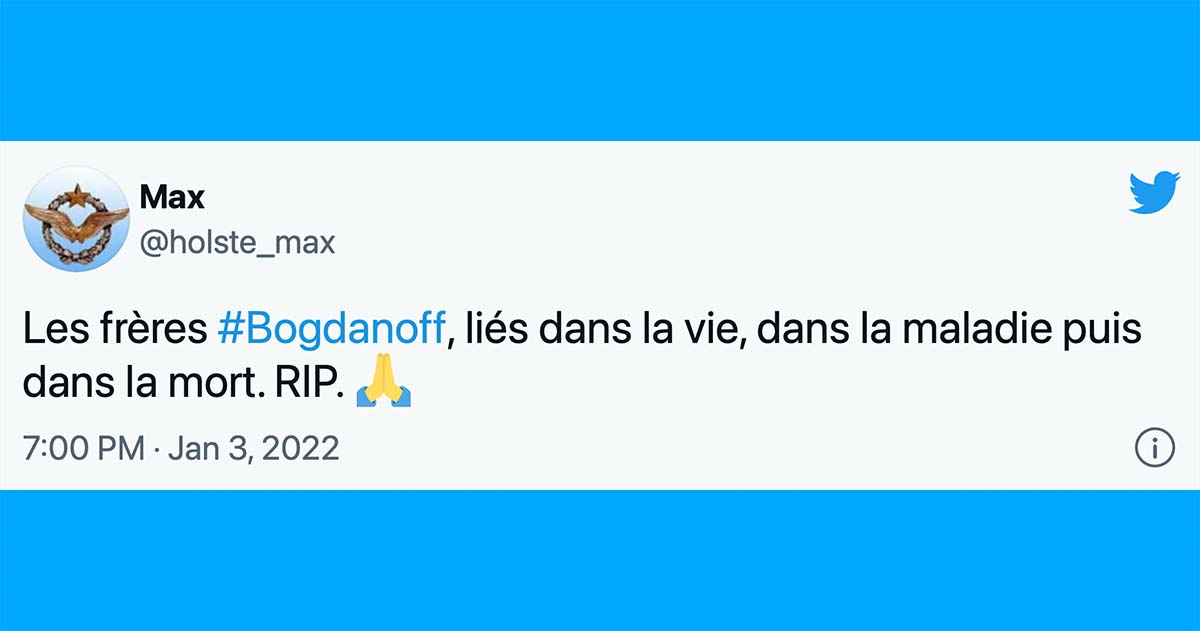 It is a great tragedy for science lovers and nostalgics of the 80s and 90s: Less than six days after the death of Grichka Bogdanoff, her brother has just died.

Sad news for the French fans of the Bogdanoff brothers. Barely days after the death of his twin brother, who had moved many Internet users, Igor Bogdanoff has just died of complications from a Covid-19 infection at the age of 72. He was the father of six children.

They were both among the most famous French personalities on the small screen. Grichka and Igor Bogdanoff particularly influenced the spirits with their cult show Temps X, which in the 80s and TF1 made the heyday of scientific popularization. An extremely popular show that also broadcast particularly iconic science fiction series such as Doctor Who or The Fourth Dimension.

Both through their presence on the small screen (they became columnists for the program Touche pas à mon poste! On C8 in 2017) and through their escapades, the two twin brothers have always fascinated the French. It is they who, touched by the nearness of their death, decided to pay tribute to them on social networks.

And these two souls, tragic sisters, flew away together, the shadow of one mingling with the light of the other. – Victor Hugo, Ninety-Three (1974)

The fools will laugh at your physique but we pay tribute to you, you were sometimes weird and incomprehensible but that ultimately made up your charm and your personality. Rest in peace ud83dude4f #bogdanoff pic.twitter.com/tVFAARlsyy

Igor #Bogdanoff died today at the age of 72, six days after his brother’s disappearance. May the Bogdanoff brothers rest united again in eternal peace. pic.twitter.com/3rcc0kKeDY

Have a good trip into the vastness of space ud83dudcab #bogdanoff pic.twitter.com/BQamWxFX9X

Still, “Temps X” was a great show. Thanks to #bogdanoff, I discovered Galactica, Cosmos 99 and the fourth dimension. I thank you for that, gentlemen. pic.twitter.com/oGW7J3S8vC

But they believed in … to live more than 120 years! RIP the brothers #bogdanoff #Bogdanov NB: #VaccinezYou pic.twitter.com/ilhnWGkBWx

“Igor Bogdanoff died at the age of 72, 6 days after his twin brother Grichka.” #Bogdanov

I see people who dare to joke about #bogdanoff’s chin when he has just left this world a week apart pic.twitter.com/Hhxcxl8lSN

RIP Grishka and Igor #Bogdanoff. I have always appreciated her atypical physique and personality. I will miss her. pic.twitter.com/SaEVzFo4t8

This is often the case with identical fusion twins, they are born and die together. RIP Peace to their souls #bogdanoff https://t.co/qLzLVEl8KR

Inseparable in life, together for eternity #Bogdanoff Rip Igor

Have a good trip to the stars!
God bless you. ud83dude4f #bogdanoff pic.twitter.com/3xZDihEzTu

While the first one had just escaped our view, the second falling star has just passed before our eyes one last time. They’ll both shine up there somewhere in the vast Milky Way galaxy. Two unforgettable faces that we are already missing.
#bogdanoff pic.twitter.com/A2Ci5dy0I7

Farewell brothers #bogdanoff and have a good trip pic.twitter.com/cWwgYHLoF9

They were atypical, but made me dream in my early youth and beyond that I will remember the #bogdanoff brothers as people who let me travel across the stars to the limits of the universe, rest in peace through the sky and Temp x. Have a good trip pic.twitter.com/iFILNotG3Y

I am shocked to learn of the death of #IgorBogdanoff, whom he left 6 days after his twin brother Grishka, what a sadness ud83dude14ud83dudc94 rest in peace all 2 #bogdanoff pic.twitter.com/XNbFC0nwld

#Igor has just joined his brother #Grichka … From inseparable stars to death u2728 #bogdanoff pic.twitter.com/G5OAd5bdmk

The # Bogdanoff brothers, united in life, in illness and then in death. REST IN PEACE. ud83dude4f

In light of Rowling’s controversial comments on transphobes, the studio takes drastic measures

“Challenge”: This will be the first film ever shot in space