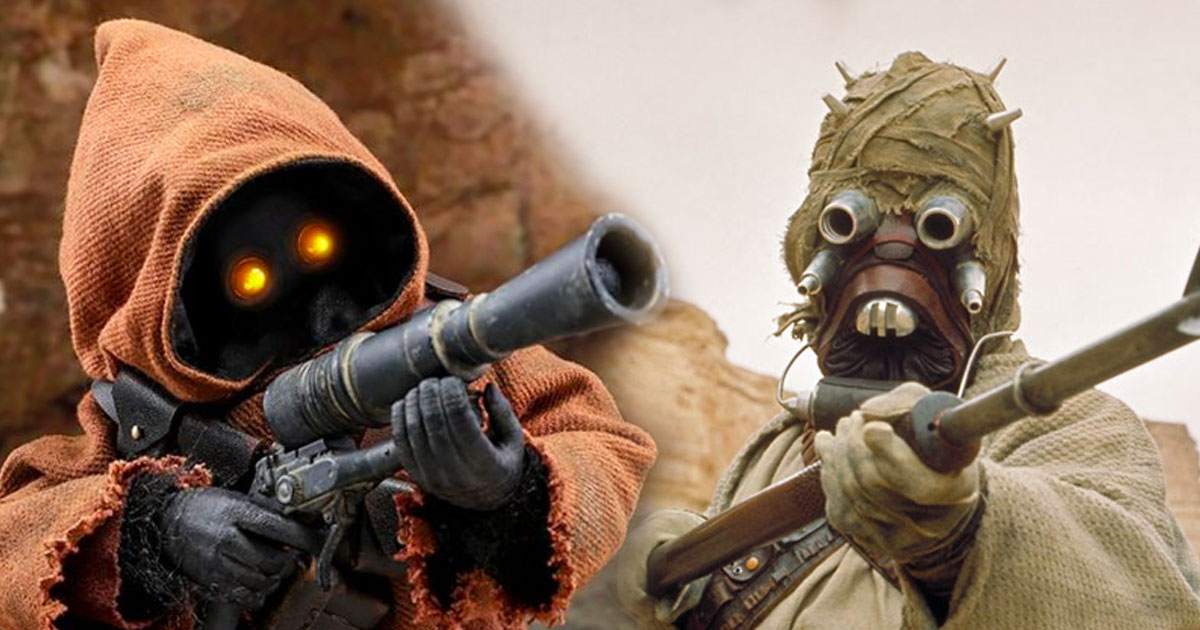 Jawas and Tuskens Raiders are creatures that were featured in the first Star Wars film in 1977 and yet remain very mysterious to this day. We’ve been able to see and see her in various films in the saga and even The Mandalorian series, but we don’t know much about her. Today we invite you to take a look at everything we know about Jawas and Tuskens and what they look like under their masks and hoods. Please note that the following lines are based on the official universe, but also on the legendary universe.

How are the jawas?

The Jawas are among the first creatures to be discovered in the Star Wars universe. As you probably know, these aliens move and live in clans. Their favorite pastime is collecting all the objects that they find interesting. The Jawas wear long brown coats and a hood that allows you to see only their eyes. Because of this, the Jawas remain mysterious, few people have seen the face of a Jawa before. It is said that the face of these creatures resembles that of an insect-strewn rodent because of the strong smell they give off. A smell that is indispensable for the Jawas. This enables them to identify themselves, learn more about family, health, or even emotions.

What most fascinates Star Wars fans are the Jawas’ yellow eyes. Well, you have to know that it’s not exactly her eyes. In reality the Jawas are sensitive to light and especially to the double sun of Tatooine. To protect their eyes, the Jawas place yellow or orange gemstones over them. Their heads were never directly revealed, but thanks to the different descriptions in the books, fans made different fan art.

Another picture of Jawa’s possible face is rumored. In a deleted scene from Return of the Jedi, a Jawa was seen talking to another creature in Jabba’s palace. The scene has been cut and is therefore unofficial, but we can imagine that it is actually a hooded Jawa talking to the hooded Jawa. He could very well have removed his outfit and the stones above his eyes while standing in a dark place.

Tusken Raiders were introduced to A New Hope back in 1977. They are also mysterious creatures. As with Jawas, it’s rare to have seen the face of a Tusken attacker before. These sand creatures protect the face to trap moisture and keep sand out. The Tuskens are believed to have come from an ancient civilization that lived under the Tatooine Dunes, but the destruction of their wells resulted in them becoming desert nomads. Though considered heartless animals by many in the galaxy, the Tuskens are very intelligent and have their own culture and rituals. We were also able to preview the first episode of season two of The Mandalorian. In general, it is men that we could see in the saga because women are responsible for running the camp. Women wear the same suits as men, but they can be distinguished by the jewelry on their tunics and masks.

Not many people have seen a Tusken’s face before, and even the Tuskens do not show each other their faces. As with the Mandalorians, they have a code that doesn’t allow them to show their faces in public. One of the rare situations in which Tuskens can see each other naked is in post-marriage mating, childbirth, or an adulthood ceremony. During an Anakin dream in the Star Wars: Republic # 62 comics, we got a glimpse of half the face of a Tusken. Unfortunately, since this is a dream, it is vague.

Still in the comics, but this time at # 59 from Star Wars: Republic, Anakin meets Sharad Hett, a man who decided to join the Tuskens and live like that. Some tuskens could then come from other till. The Tusken attackers, therefore, refer to a culture more than a species, although it is believed that most of them died from the Kumumgah people.

Based on what is said in the books, artist Tim Bradstreet also had his interpretation of the Tusken exposed. Here he looks very strong, like a man with damaged skin.

And if you don’t want to end up funnier, since you really can’t know what a Tusken looks like, here’s what a Tusken Raider looked like in 1977.