Nichelle Nichols is an actress, singer, producer, and author from the United States. She is best known for her role as Lieutenant Uhura in the original “Star Trek” series, which ran from 1966 to 1969. She has played the same character in six “Star Trek” movies. Nichelle became very popular at conventions as her career went on. According to Celebrity Net Worth, Nichelle Nichols net worth is around $500,000.

Grace Dell Nichols was born on December 28, 1932, in Robbins, Illinois, which is a suburb of Chicago. This is where Nichelle Nichols grew up. She grew up with her mom, Salish, her dad, Samuel, and her little brother, Thomas. Her father worked in a factory and was the mayor of Robbins and chief judge. Nichelle’s brother, who was a member of the Heaven’s Gate cult, died in the group’s mass suicide in March 1997. 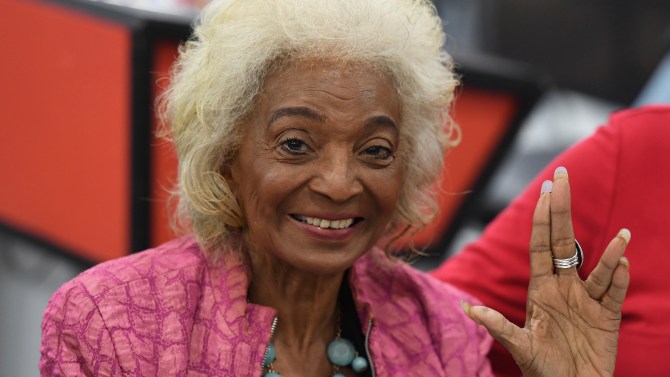 Nichols got her start in show business when she was 16 and worked as a dancer with Duke Ellington’s band. Ellington asked her to sing for him, and when she did, he was so impressed that he thought she should be the leader of the band.

Before jumping into Nichelle Nichols career info, In 1961, Nichols played the lead role in the Oscar Brown musical “Kicks and Co.” This got the attention of “Playboy” publisher Hugh Hefner, who hired her to perform at the Chicago Playboy Club. She also played the main character in a Chicago production of “Carmen Jones,” and she was in a New York production of “Porgy and Bess.”

Her first film role was as a dancer in the 1959 version of “Porgy and Bess” with Sidney Poitier and Dorothy Dandridge. She was not given a credit for this role. Then, in 1966, Nichelle was in the movies “Tarzan’s Deadly Silence,” “Made in Paris,” “Mister Buddwing,” and “Doctor, You’ve Got to Be Kidding!” 1967, and in January of that year, she was on the cover of “Ebony” magazine. In 1964, she was a guest star on “The Lieutenant,” a show created by Gene Roddenberry.

Two years later, he gave Nichols the role that would change her life: Lieutenant Uhura on “Star Trek.” The first episode of the show aired on NBC on September 8, 1966. It ran for 79 episodes before it was taken off the air in 1969. During the first season, Nichelle thought about leaving the show to try to make it on Broadway, but Dr. Martin Luther King Jr. persuaded her to stay by telling her, “You can’t just quit, because this is a very important job. We are marching because of this. We didn’t think we’d ever see this on TV.”

In the 1968 episode “Plato’s Stepchildren” of “Star Trek,” Nichols and co-star William Shatner shared the first kiss between two people of different races on a scripted U.S. TV show.

There have been two weddings for Nichelle Nichols. Foster Johnson was a dancer, and she was first married to him. She has a son named Kyle Johnson from her first marriage. She got married to Duke Mondy in 1968. But in 1972, she was also divorced from her second husband. In 2018, she was told that she had dementia, and after that, she stopped going to conventions.

Nichols has been in the middle of a nasty fight about who should be in charge of his care. In the fight over guardianship, her son Kyle Johnson, her friend Angelique Fawcette, and her old manager Gilbert Bell are all involved. In 2018, Nichols’s son Kyle won the petition to become her guardian.

Nichelle Nichols is an actress, singer, producer, and author from the United States. She has a net worth of $500,000. Nichelle became very popular at conventions as her career went on. She could make between $10,000 and $50,000 to speak at conventions, depending on how big they were and how long she was there.

Nichols was making hundreds of thousands of dollars a year from these conventions before health problems forced her to retire. Nichelle has been in more than 60 movies and TV shows, such as “Snow Dogs” (2002), “Are We There Yet?” (2005), and “The Young and the Restless” (2016).

So, that’s all about Nichelle Nichols net worth. When she played Uhura in the Star Trek series, she broke new ground for African American female characters on American TV.