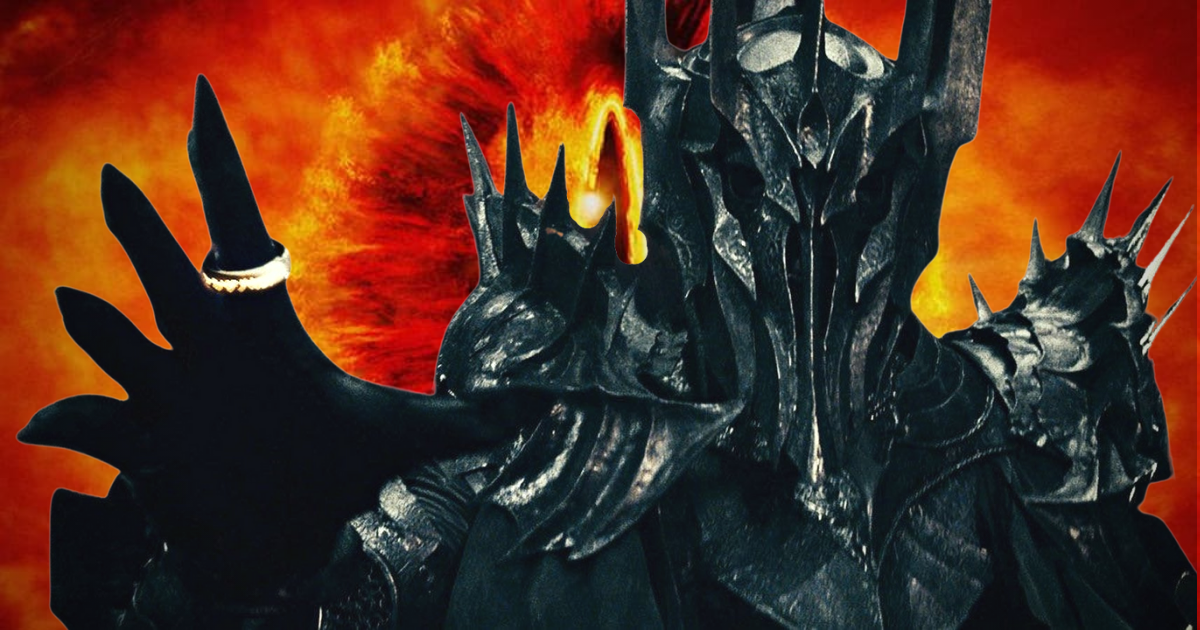 Last month we revealed which iconic character was originally set to go head-to-head with Sauron in the final film of Peter Jackson’s trilogy, The Lord of the Rings: The Return of the King (2003). Today, while the Amazon series The Lord of the Rings: The Rings of Power is all the rage following the release of the first trailer, we’re going to tell you the full story of Sauron.

The truth about Sauron

While in the Lord of the Rings films the character’s most notable form was the Eye of Sauron hovering over Barad-dûr, his most notable appearance was during the flashback in The Fellowship of the Ring (2001). This scene depicts the last alliance of Men and Elves at the Siege of Barad-dûr, as Men and Elves clash with the forces of Sauron. And when Sauron’s defeat seems within reach, he emerges from his tower to fight, clad in hideous armour. With his terrible mace he sweeps away everything in his path and takes the life of Elendil, father of Isildur. The latter will manage to cut off the finger of the Dark Lord who wears the One Ring, thus destroying his body.

With recent speculation surrounding Sauron’s possible return in Amazon’s new Rings of Power series, some Lord of the Rings fans have begun to wonder what the Dark Lord looked like in his armor. The answer is a bit complicated though.

For starters, the scene where Sauron loses the One Ring is certainly memorable, but unfortunately it’s not faithful to Tolkien’s books. For in the original work, it is Elendil who, accompanied by the elf Gil-galad, High King of the Noldor, manages to destroy the physical form assumed by Sauron at the cost of mortal wounds. But it is Isildur who cuts off his finger to take the One Ring from him.

But to understand what Sauron’s true appearance is, it is necessary to understand his origins, an element sadly left aside in Peter Jackson’s trilogy, though he nonetheless appears as one of the work’s main antagonists. .

To reiterate a little: Eru Ilúvatar is the being at the origin of the universe in Tolkien’s legend. After creating the universe, Eä, he created the Ainur, offspring of his thoughts. While Ilúvatar and the Ainurs were creating the world of Arda during the Ainulindalë, one of the Ainurs, Melkor, decided to interfere with the others. After creating Arda, the Ainurs decided to go to this new world, and so the most powerful of them became Valar and the others Maiar.

And Sauron was originally a Maiar in the service of the Valar smith Aulë, master of earth and minerals. He was then known as Mairon. But he will be one of the first to be corrupted by Morgoth, who is none other than Melkor the fallen Valar, and thus becomes his most loyal servant. He would then be the first lieutenant of the First Dark Lord and like many Maiar had the ability to shift and hide his true nature.

In the First Age, He is portrayed as a very handsome and attractive figure with great power over the minds of others. After the end of the War of Great Wrath and the defeat of Morgoth, Sauron chose to go into hiding for a time, fearing the judgment of the Valar, and then remained hidden in Middle-earth.

After a period of calm, Sauron set out to regain his lost power. Posing as a messenger of the Valar named Annatar, he befriends the Noldor of Eregion. To do this, it changes its shape and takes on a pleasant appearance. Thus he will instruct the smiths in the art of ring making. Thus, in the middle of the second age, the smiths of the city of East-in-Edhil will forge the rings of power that Sauron intended to use to enslave every race of Middle-earth.

But when Sauron forges the One Ring himself, his true intentions are discovered by Celebrimbor, who denied him the creation of the three rings meant for the Elven Lords, thus protecting them from his contamination. Thus began the war between the elves and Sauron. When he was defeated, he was captured and taken to Númenor, an island given to the humans by the Valar. But just as he had managed to trick the elves, Sauron also managed to corrupt the Númenorean king. As the men of Númenor grew more belligerent, they even attempted to strike at the Valar. In response to their wickedness and in retaliation, the island will end up being completely drowned under the oceans.

Thus the body of Sauron was destroyed, although his spirit still managed to escape and return to Mordor, however, he will return greatly diminished. And when he slowly regained a form, it no longer had the beauty it had in the past. All the malevolence of his being had created a new physical form that could no longer assume a beautiful aspect.

But when Tolkien’s work mentions that the Second Age ends with the defeat of Sauron against the last alliance of Men and Elves, Tolkien never described the Dark Lord as wearing armor. Although he made it clear that Sauron was in physical form at this point in the story, there is no indication as to whether or not he wears armor. His famous armored portrayal was created entirely for the Peter Jackson trilogy, likely with the idea of ​​creating a fearsome character equipped with equally fearsome armor.

While certain passages from Sauron’s life have of course been intentionally shortened here, we see that there is enough material to evaluate the character and it’s unfortunate that we haven’t had a film or series that explores the origins of one of popular culture’s most iconic figures develop antagonists. But with Amazon’s next The Lord of the Rings: The Rings of Power series slated for this year and set to take place in the Second Age, we may get a chance to catch a glimpse of the Dark Lord in his former physical form. Answer in September 2022.