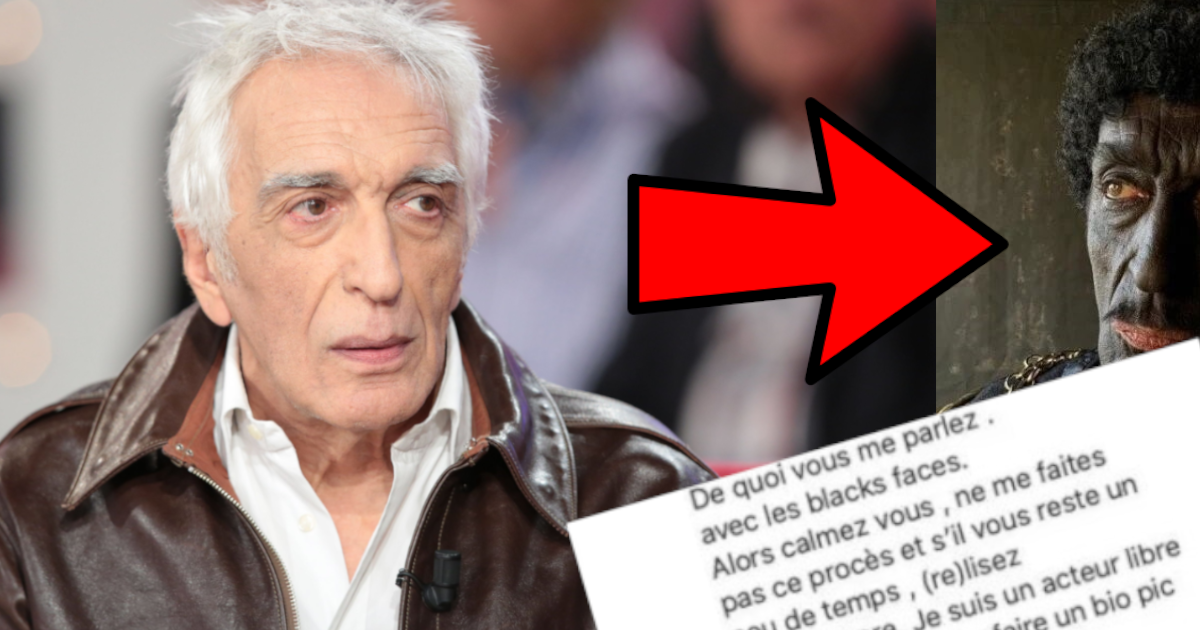 It seems decided that the time has come for racist polemics. After the broadcast of a sequence with the presenter Pépita by TMC, which made Internet users roar, the actor Gérard Darmon now also attracts the ire of social networks. Questioned posting on his Instagram account a snapshot depicting his face and neck as a black man. An act that did not go unnoticed and that accused him of having published a black face. And not without consequences, if we know what all those who have tried have been confronted with. Explanations here.

blackface, a practice that is still borderline

Did Gérard Darmon want to spice up his Easter Monday with such a cliché? Nothing is less certain, but the reactions were not lacking in flavor. In the caption (below): “Othello for Marleau” in reference to his future take on the character of Othello – an emblematic hero in a Shakespeare play – in the next installment in the Captain Marleau series. The outfit is complete: curly hair, black makeup and chains around the neck.

The photo was quickly deleted from the actor’s Instagram account, who was accused of blackfaceing. As a reminder, this 19th century practice was to put white stage actors together to do caricatures of blacks. A habit that was widespread until the struggle for civil rights gained momentum. Here is what Gérard Darmon replied to his accusers:

What’s happening ? I’m talking about Shakespeare’s Othello. Laurence Olivier. Orson Welles. Pierre Brasseur and a host of others. What are you talking about with black faces So calm down, don’t sue me, and if there’s time, read Shakespeare again. I’m a freelance actor and if one day I want to do a biopic about Mao Tse-tung, I will.

Some netizens determined to win this battle did not fail to leave a historical memory to justify the inappropriateness of the stereotype published by the actor. Thus the character of Othello, although he is referred to as the “Moor of Venice”, would never have been referred to as an absolute black character a priori. If the term “bog” could refer to a person with dark skin, no one confirms that it applies to people in sub-Saharan Africa. Still, he’s not the only one to spark controversy: other personalities like Justin Trudeau, Antoine Griezman and Kim Kardashian have bitten their fingers, as have some Le brand employees. French letter.

gerard darmon makes a blackface
Gerard Darmon behind him 40 years of profession, 40 years of management, 40 years of TV shows where he knows what to say, where all his words are carefully chosen
He knows exactly the size of what he posted and he himself says it in a comment pic.twitter.com/amAJ6oFRjF

After Gérard Darmon’s blackface to play Othello, I thought about this very nice analysis by Sylvie Chalaye on this question. pic.twitter.com/1upHcf9KXd

The end of Gérard Darmon’s career … it’s a shame. The guy does it in blackface without seeing the problem. He should have stopped on that role in Avengers. pic.twitter.com/sXJ1167NGA

Not very smart Gérard Darmon on this point there Othello is a bog like him .. the blackface wasn’t necessary

Very good Gérard Darmon in the role of the man who had never heard of blackface. Overall actor.

I don’t understand why Gérard Darmon is dressed in black (#Blackface) to play Shakespeare’s Othello.

In addition to being tasteless, Darmon is a Sephardic Jew from North Africa. His natural skin color corresponds to the character (a moor) without make-up. https://t.co/zc4vcCYtNx

Ok, now I’ve seen why people are talking about Gérard Darmon … Seriously disappointed in him, I thought he was over that kind of shit, on the side of those who know it’s nothing but a black face , I got seriously wrong … https://t.co/Xh5WKxKam5

So Gérard Darmon makes a black face in the utmost calm and does not see the problem?

I don’t know what to think of Blackface anymore. I personally cannot imagine Gérard Darmon as a racist. Who remembers Justin Trudeau and Antoine Griezmann who also did blackface? Person. We’re not all going to cancel because of a mistake

Gérard Darmon’s black face. Another actor who doesn’t understand that we can’t play everything. Worse than Scarlett Johansson