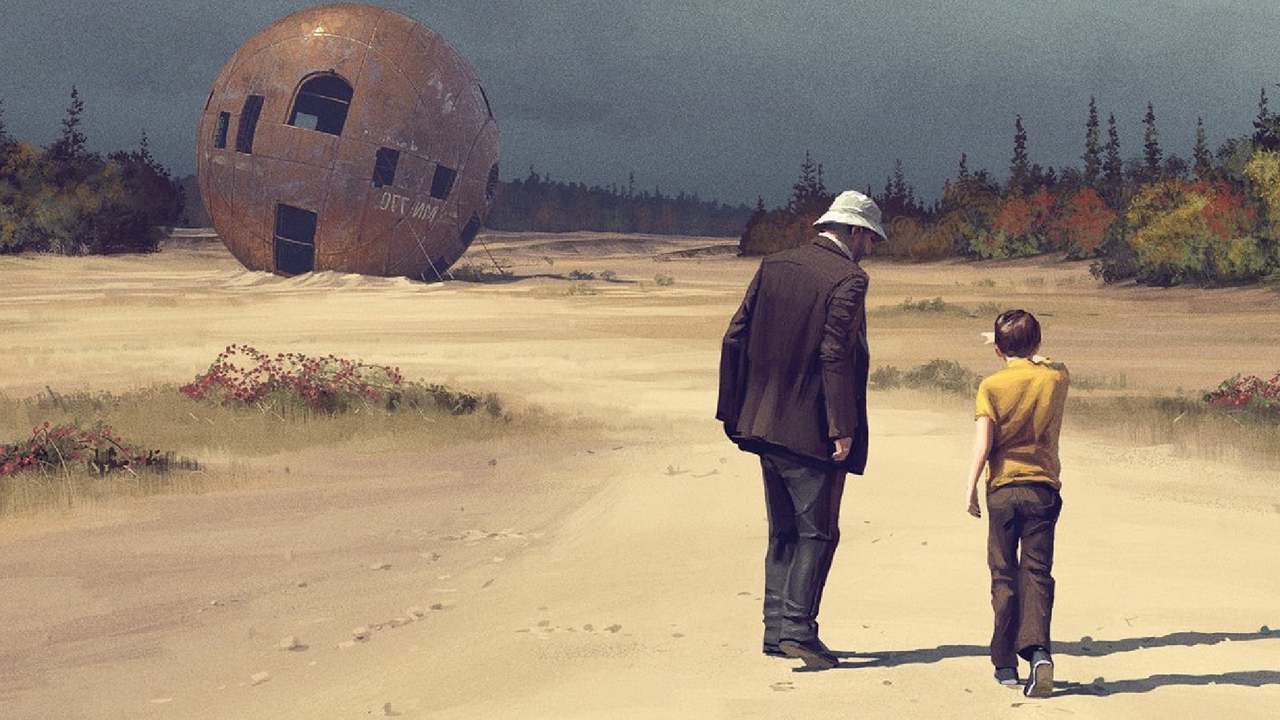 For a few weeks now we’ve all been watching the second season of The Mandalorian. It had been a long time since a series had excited the public and the press together at the pace of the weeks. However, 2020 will have been very exciting, even if some unfortunately went unnoticed.

Warning: we chose not to mention Le Jeu de la Dame in this selection. In fact, the series has a huge hit that is well deserved. Therefore, if it has enough space in the top of 2020’s best streak, it might not appear in this selection.

Tales From The Loop was released on Amazon Prime Video last spring and is a real slap in the face. Inspired by a Swedish role-playing game, this SF miniseries tells the daily life of residents of a small North American town in the 1980s, where The Loop, a gigantic particle accelerator, originally hosted strange events. In the form of an anthology mini-series, in which each episode deals with the fate of a specific character, this series impresses with its originality. Tales From The Loop revolutionizes the aesthetics of science fiction with its snow-covered forests and rusty, screeching robots and is strongly reminiscent of the legendary series The Fourth Dimension. With a crazy poetry that overwhelms the heart, the series manages to reinvent concepts that are not yet in SF: teenagers changing their bodies, the man who travels between dimensions, the young couple who the Time stops.

Every episode, beautifully staged by renowned directors like Mark Romanek (Never Let Me Go) or Andrew Stanton (WALL-E), is a bubble of bewitching poetry and devastating melancholy, created by the ever-sublime music of the legendary Philip Glass. A word about the cast also with Jonathan Pryce (Brazil, Game of Thrones, Tabu). The main character of the best episode of the series (the fourth) delivers an interpretation that is not flawed, in this role of the grandfather who wants to teach his grandson the inevitability of his own disappearance. We can also mention Rebecca Hall (The Prestige), Paul Schneider (The Assassination of Jesse James by the Coward Robert Ford), Dan Bakkedahl (Veep) and Ato Essandoh (Django Unchained). A series that urgently needs to be discovered!

2 / The Conspiracy Against America (HBO)

The new collaboration between the legendary HBO channel and the legendary David Simon, to whom we owe the masterpieces The Wire, Treme, Show Me A Hero and The Deuce, The Plot Against America, is a miniseries adapting the novel of the same name of the great Philip Roth, who unfortunately passed away in 2018. In The Plot Against America, it was not Franklin Roosevelt who won the 1940 presidential election, but rather Charles Lindbergh, the American aviator Charles Lindbergh, a sympathizer of the Nazi regime, supported by part of the Jewish community for his rhetoric against warmongering. We follow the time of six particularly intense episodes there, the daily life of the Levin family (Roth in the book), who, under the mandate of Charles Lindbergh, will experience many states of heartache due to their many political differences.

Whether David Simon is adapting a novel by Philip Roth is obvious. Alongside Martin Scorsese, Bob Dylan and the writer Tim Wolfe, the two artists are among America’s greatest portrait painters. With The Plot Against America, Simon signs his most open and therefore most easily accessible work. Particularly well written, it deserves to be analyzed both as a successful adaptation of the novel by Philip Roth and as a series by David Simon as the screenwriter addresses all of his obsessions. As in any of his series, Simon brilliantly analyzes how the political mixes with the intimate. Why, among the innumerable novels by the author of Portnoy and his complex, did I marry a communist or La Tâche and David Simon adapted this particular novel? It would be wrong to believe that The Plot Against America is just an anti-Trump rant. Former journalist David Simon primarily takes the opportunity to photograph the behavior of Americans between elections and tries to explain why certain voters are clearly voting against their interests (we recall that Donald Trump could benefit from the support of African Americans and Indian voters).

The plot against America is also a true model in relation to Uchronia, a genre that is experiencing a real resurgence of interest, as evidenced by the very close releases of Once Upon a Time in Hollywood, Quentin Tarantino’s latest masterpiece. the Watchmen miniseries, the final hit by Damon Lindelof (The Leftovers) or Hollywood, by Ryan Murphy (America Horror Story). The miniseries perfectly combines fact, archival footage and fiction and is a real playful tour de force in that regard. We also have to talk about the casting, absolutely terrific. David Simon meets again with Zoe Kazan (The Two, The Ballad by Buster Sruggs) and Winona Ryder (Show me a hero, Edward aux Mains d’Argent, Stranger Things). The excellent John Turturro (The Night of), known to fans of the Coen brothers, signs his first collaboration with David Simon here. He plays the role of the rabbi Bengelsdorf. But the real revelation of The Plot Against America will have been Morgan Spector (Boardwalk Empire) in the role of Patriarch of the Levin family.

Robert Downey Jr. (Iron Man) has offered HBO to produce a reboot of the legendary American detective series Perry Mason. Indeed, Perry Mason is for many a series of 82 detective novels written by the writer Erle Stanley Gardner between 1933 and 1973. a nine-season television series of 271 episodes that aired on CBS between 1957 and 1966, starring the excellent Raymond Burr (Window in the Courtyard); After all, there are thirty telefilms, always with Raymond Burr, made between 1985 and 1995. The action of this new version of Perry Mason takes place in 1932. Perry Mason, private detective and attorney, investigates the sinister murder of a newborn. A criminal and legal case that will forever change the lives of Perry Mason and the City of Angels.

Originally, the series was supposed to be written by the excellent Nic Pizzolatto, creator of the legendary True Detective series. In the third season of his detective anthology series, Pizzollatto turned down the offer, and it was the writers Rolin Jones and Ron Fitzgerald who had the delicate task of shaping this project. And it is clear that it is a real success. In eight episodes, the showrunners managed to offer the 50/60 series an effective restart / prequel. If the first part, utterly fascinating in its way of paying homage to black films, differs from anything its eldest made us used to, then its second part will fully satisfy fans of the first hour.

The scenario, finely chiseled, is not the only point that characterizes Perry Mason. As always, HBO used the funds to produce a very artistically rich series. To this end, the broadcaster commissioned director Tim Van Patten to direct five of the eight episodes of Perry Mason. Van Patten, historical director of the station, best known for directing the first two episodes of Game of Thrones, several episodes of Boardwalk Empire, Rome, The Pacific and the Sopranos, delivers episodes with a neat and precise staging . Another big advantage of Perry Mason: His casting is perfect, with Matthew Rhys primarily playing the title role. The brilliant and charismatic actor from The Americans signs an interpretation that should guarantee him an Emmy Award for best actor in a drama series. Also note that Perry Mason was designed as a miniseries. Finally, given the series’ critical success, HBO extended it for a second season.

After the triumph with the two seasons of her series Fleabag, the British Phoebe Waller-Bridge created the series Killing Eve for the BBC, the third season of which was released this year. The series adapts the code-named Villanelle novel series and records the obsessive hunt for a psychopathic killer, Villanelle (Jodie Comer), by MI6 agent Eve Polastrie (Sandra Oh). Renewing the codes of the spy thriller, Killing Eve is a dynamic series where violence meets delicious British humor.

Above all, the greatest strength of Killing Eve is the prestigious cast. Jodie Comer is exceptional as a psychopathic and selfish killer. Charismatically, the British actress delivers a completely crazy performance that makes her the real attraction of the series. Sandra Oh, who we spotted in Grey’s Anatomy, is just as compelling, though the American actress delivers a more sober, classy take when compared to her colleague. Killing Eve is also an opportunity to find Fiona Shaw, eternal aunt Petunia in the Harry Potter films, in a role where her ironic demeanor works wonders. Perhaps among the previous two seasons, season 3 of Killing Eve is still rich in twists and turns. Supporting characters loved by fans die brutally, new characters appear. Above all, we learn more about Villanelle’s past.

The first season of His Dark Materials, a series adaptation of Philip Pullman’s cult fantasy trilogy At the Crossroads of the Worlds by HBO and BBC, unfortunately went unnoticed despite its great qualities. The hugely generous series, however, had suffered from release at the same time as three other series of events: the promising first season of The Mandalorian, Watchmen, the final masterpiece by Damon Lindelof, and the first season of The Witcher. The series also suffered from certain flaws, most notably with certain script choices that weakened certain scenes in the book, such as Madame Coulter’s first appearance.

Fortunately, given the high potential of this adaptation, HBO and BBC have decided to renew the series and adapt the second volume of the trilogy, The Tower of the Angels. From the end of the first season, this new episode will surely convince those who discovered the first season with caution. Indeed, the opening episodes of this second season, which will have seven episodes (the Covid-19 pandemic has forced the BBC to abandon an episode aimed at Lord Asriel), are both more rhythmic and epic. In addition, viewers who have not read the books now have all the cards in hand so they can enjoy the story that is being told to them. Those, like the author of these books, who enjoyed the first season very much, will be pleased to find little Lyra and young Will on their journey between worlds. If this second season has a bigger hit than the first, we hope the BBC and HBO adapt The Dust Trilogy, sequel and prequel to His Dark Materials, whose second volume, Community of Spirits, was recently released. in France.

Mark Wahlberg’s incredible physical transformation for his next role

The DJI Osmo Action sports camera, an alternative to the GoPro 8, benefits from a discount of 150 euros