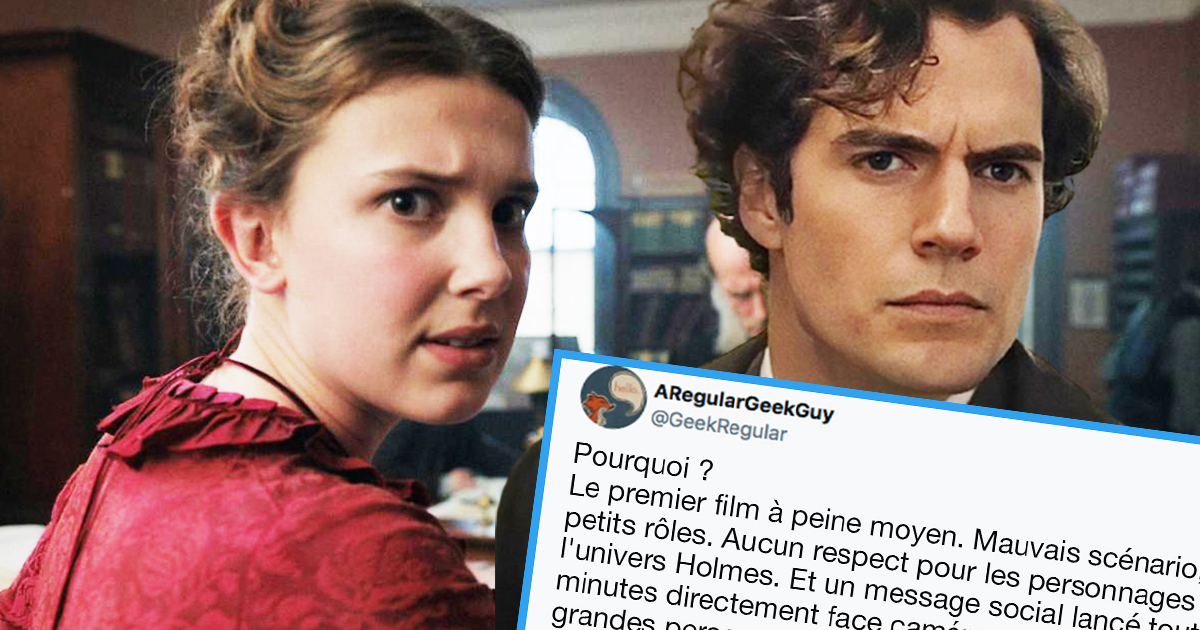 As we stand on the verge of slowly resuming normal life in France and being able to step on the soft carpet of dark rooms again, Netflix continues to enrich its catalog and gain followers. In 2020, the platform broadcast Enola Holmes, an adaptation of the literary series The Investigations of Enola Holmes, in which Millie Bobby Brown appears alongside Henry Cavill in the guise of the famous detective. This Thursday, May 13th, Netflix generated a strong reaction after posting it on its Twitter account. Explanations.

A sequel for Enola Holmes announced!

It’s now confirmed by Netflix: Enola Holmes will actually have a sequel. The first work, starring Enola Holmes (Millie Bobby Brown) and her brother Sherlock (Henry Cavill), was released in 2020 and directed by Henry Bradbeer and Jack Thorne.

A feature film that had some success and that surely drove Netflix to continue. For this sequel we will find the same (fine) team. However, we don’t know yet if Sam Clafin (Mycroft Holmes), Helena Bonham Carter (Eudoria Vernet Holmes) and Louis Partridge (Lord Tewkesbury) will be in the game. In addition, the official Netflix tweet sparked several reactions.

a majority of internet users are overjoyed

Netflix officially announced a sequel for Enola Holmes this Thursday, May 13th:

The sequel is underway!

The adventure continues when Millie Bobby Brown and Henry Cavill return to the world of ENOLA HOLMES and collaborate with director Harry Bradbeer and writer Jack Thorne to make a second film about Nancy Springer’s book series about Sherlock Holmes’ brilliant sister. pic.twitter.com/7tsr1fbej2

The rest is on the way!

The adventure continues. Millie Bobby Brown and Henry Cavill return to the world of ENOLA HOLMES and collaborate again with director Harry Bradbeer and screenwriter Jack Thorne in a second film based on Nancy Springer’s book series about the extraordinary little sister of Sherlock Holmes.

And here are some reactions:

Thanks @netflix for listening to your fans !! Cant wait to see #HenryCavill and #milliebobbybrown in the sequel!

Thanks @netflix for listening to your fans !! Cant wait to see #HenryCavill and #milliebobbybrown in the sequel!

Nobody asks Netflix and its sequels, but they keep canceling really rewarding shows like Gypsy … My God! By when …

That’s fine and all, but you should have announced that after confirming Susie Wokoma’s return. Her scene with Henry Cavill was the best thing about the film. pic.twitter.com/EkksVFaUAP

That’s good and all, but you should have announced that after receiving confirmation of Susie Wokoma’s return. Your scene with Henry Cavill was the best part of the movie.

Does it happen upside down in the world? Maybe Henry wants to fight the demogorgon #EnolaHolmes

The first barely average film. Bad scenario, small roles. No respect for the characters in the Holmes universe. And a social message posted right in front of the camera every 5 minutes. We are adults and not children in kindergarten. We understand without drawings.

This is wonderful news as #MillieBobbyBrown is very talented and deserves all of the success so I am sure that #EnolaHolmes 2 will be amazing !!!!!

This is great news because #MillieBobbyBrown is very talented and deserves every success. I am sure that #EnolaHolmes 2 will be great !!!!!