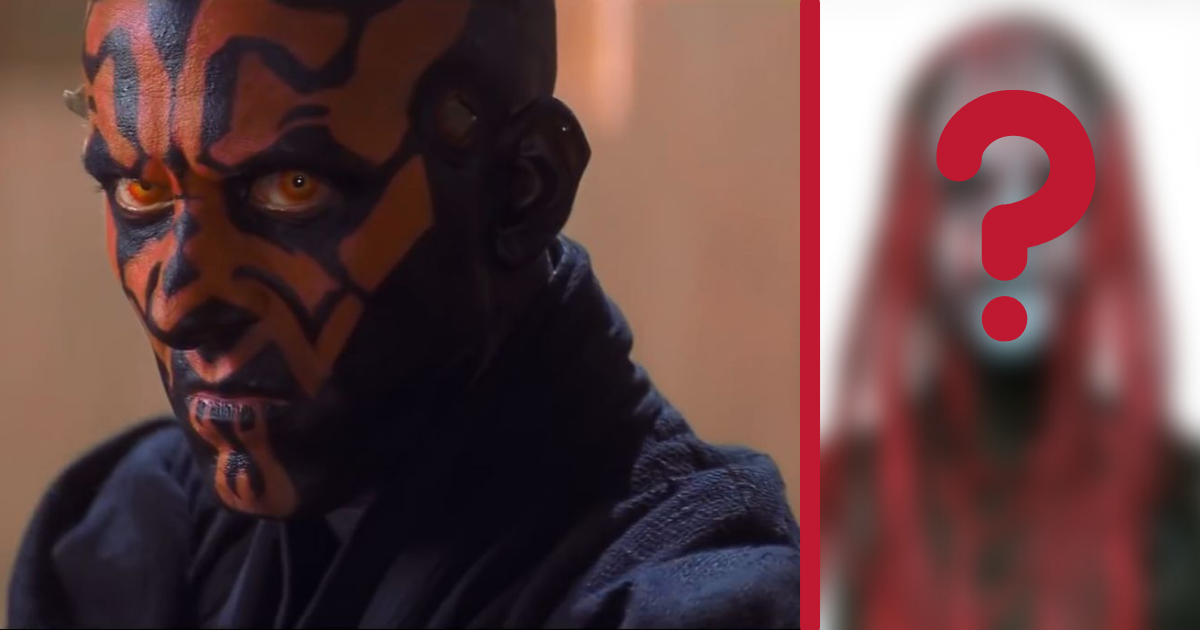 Darth Maul is arguably the most convincing Star Wars antagonist of the second trilogy. Aside from his iconic double-edged lightsaber, it’s impossible to forget his creepy and formidable black and red face. Still, Darth Sidious’ apprentice could have looked very different: From a zombie appearance to a feathered warrior to a sad clown, his final appearance comes from a long and exciting journey.

Ian McCaig at the origin of the character

Before Darth Maul looked like we know him, various design ideas were considered. It must be said that Georges Lucas didn’t have any specific specific ideas before bringing them to life on screen.

The director therefore left the fate of the warrior’s appearance to the artistic designer Iain McCaig (who was later assigned to the staff of Harry Potter and the Goblet of Fire or even Steven Spielberg’s Hook).

McCaig is initially unsure which route to take. First he draws sketches of a warrior who is particularly well equipped with accessories. To do this, he took an example of Nazi-inspired military helmets or used different and varied masks. However, none of this convinces him.

To widen the range of possibilities, George Lucas gives him the following advice: “Draw your worst nightmare.”

With this advice, the Chara designer envisions an undead face, with red ribbons cascading around his head:

Being a nightmare is a nightmare. A little too much for the creator of Star Wars who isn’t convinced. He therefore asks the artist to be inspired by his second worst nightmare.

Against all odds, it was ultimately this track that gave Darth Maul’s current design. And this source of inspiration is particularly amazing.

In fact, its looks are directly inspired … by a clown! McCaig was afraid of it as a child.

The red and black geometric shapes are therefore derived from this traditional makeup. But first he threw himself headlong into this concept and practiced every model that was available to him, as the following pictures show:

The arrangement of the patterns then gave him the idea of ​​creating a kind of circuit that connects the different shapes. This concept is combined with another secret that allows it to give this somber appeal: the layout of the brands.

In fact, the Chara designer wonders what would happen if these were placed in such a way that it seemed like the flesh was peeling off. He follows this idea by overemphasizing the muscles in his face. And let’s go! Your makeup is ready.

Darth Maul could have worn feathers

Darth Maul no longer looks like an undead, but he’s scary nonetheless. To soften it up a bit and cut it off with his extremely tough face, McCaig adds some feathers to it, as seen below:

The feathers should also offset the horror of her tattoos to make the dark side look alluring.

However, those who followed a little will have noticed that Darth Maul is far from having a shamanic stare. It actually comes from confusion on the part of the staff.

A confusion that led to the horns

Given the preliminary sketches, the team of props and make-up artists took feathers … for horns! That’s why we see it that way in the film.

Of course, that doesn’t make him soft, on the contrary. But it is clear that the rendering is final and the character of Darth Maul is undoubtedly one of the most eye-catching in the saga.