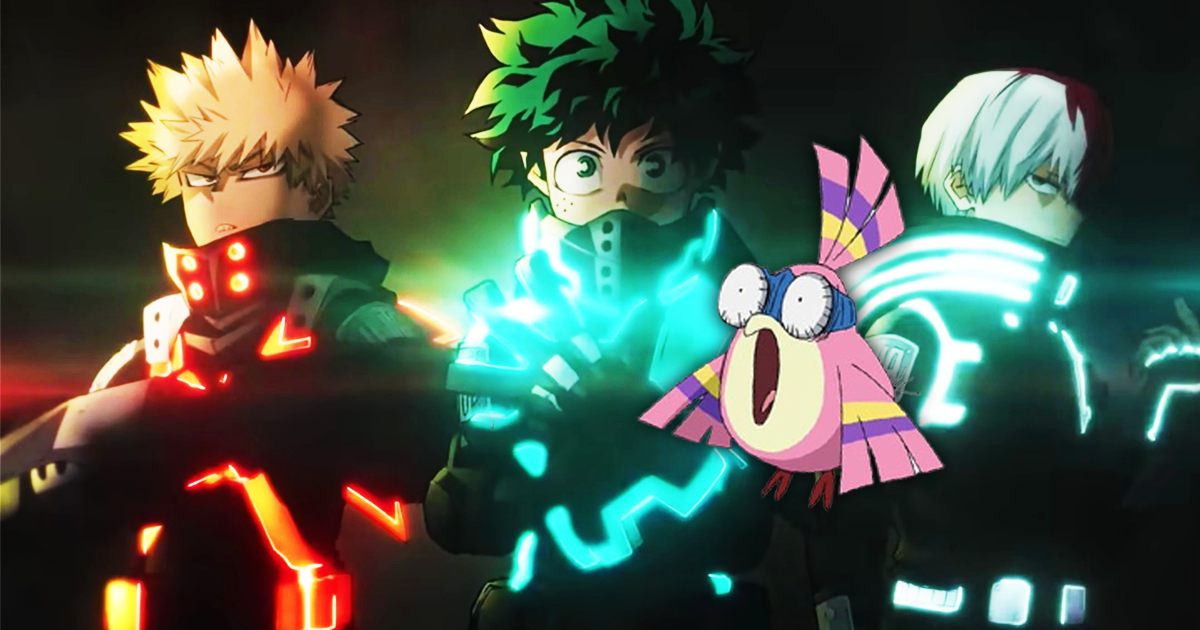 We had the opportunity to discover in the Grand Rex the movie My Hero Academia: World Heroes’ Mission in a preview and today we offer you a review without spoilers. As a reminder, the next My Hero Academia movie will hit theaters on January 26, 2021.

The film My Hero Academia: World Heroes’ Mission takes place during the manga’s Endeavor Agency arc. During the film, Izuku Midoriya and his classmates join the Professional Heroes to stop a large-scale terror plan that will end the Quirks. The terrorists gather under the name of a sect called “Humarise”, and everyone is convinced that the wielders of quirks are too powerful and will inevitably bring about the extinction of mankind. So Midoriya, Bakugo and Todoroki must join forces with other heroes to put an end to this apocalyptic cult that threatens the whole world.

If the opening synopsis is interesting, we warn you right away: this is a movie that will certainly have no impact (or almost) on the overall scenario of the series. Like many animated films, it is filler. However, fans of the series can enjoy some events that appear in this brand new anime.

At the end of My Hero Academia Season 5, Deku develops a new power related to his Quirk, the “Black Whip”.

This power is meaningfully reused in Worlds Heroes Mission, leading to sequences that we’re not really used to seeing in the animated series. Deku, rising into the air to corner his enemies or escape their clutches, sometimes reminds us of Attack on Titan’s animation (when the characters use their three-dimensional gear), sometimes of Spider-Man, in particular for some choreographies.

Aside from the animation for Deku’s Quirk, we’re very close to what we can see in the series in general.

As for the characters that we already know, we will find many of them in World Heroes’ Mission, and maybe that’s where one of the big problems of the film comes from: why introduce so many characters when most of them will only have one scene, or just one line? The ambition of the film was great: to have groups of heroes formed in all corners of the world to protect the inhabitants from Humarise. But this multitude of characters leaves a bitter taste in our mouths.

And the character that’s supposed to be number 1, Endeavor, is probably the one whose absence is most noticeable. The world as all characters know it is doomed, but Endeavor (and all other professional heroes, for that matter) leaves behind three teenagers who have to give it their all. Some explanations are provided, but nothing that can convince us. We understand the choice of script, but the general plot remains a bit disappointing.

The new characters introduced, on the other hand, are quite interesting as a whole, and the characters of Pino and Rody, which you can discover below, clearly steal the show from our shock trio.

Without spoiling you, a very atypical character is also introduced, referring to another country in the world, a country traveled by the heroes to try to counter the Humarise threat. And the character in question leads to some well thought out humorous scenes.

What we didn’t appreciate as much was the leader of Humarise, Flect, and in particular the reasons he gives to help us understand why the character has descended into hate and madness to such an extent. Yes, the reasons are indeed valid, but wasn’t it a bit too hasty and above all warmed up? The ultimate villain giving those kinds of reasons we’ve seen the Shonens all too often. The fact remains that his quirk is original and well thought out, setting up an intense fight that made more than half the room in which the movie aired react. Because actually, and we’ll get to that, the main strength of My Hero Academia: World Heroes’ Mission lies in its combat, not its plot.

Epic battles on the program

If you’re a fan of My Hero Academia, you should certainly expect some great fights on the program, and for once, you’ll be served. Good OSTs, an electrifying atmosphere, quirks that heat up and sometimes turn out to be more powerful than we originally thought… We really understand when we see these epic fights why there are so many MHA fans worldwide.

It’s beautiful, it’s raw, it’s adrenaline pumping and it leaves us wanting to see more. As I’m sure you’ve understood, this is the film’s strength, which has managed to keep the hype surrounding the Quirks of our three friends alive and proves that it’s always possible to create fights that are both dynamic, epic and original are.

the conclusion of the letter

The few screenplay pirouettes (especially the fact that no professional hero in the world could help our main hero trio) and the fact that the other characters appear very little in the plot are the black points of this new film My Hero Academy. While the overall plot didn’t pull us in too much, the quality of the combat made up for it, and that’s ultimately what we’ve come to expect most from this type of animated film.

And you plan on watching My Hero Academia: World Heroes’ Mission when it hits theaters? We’ll let you answer this question via our poll and via our comments section! And if you want to know why the latest My Hero Academia game will definitely not please everyone, you can check out our previous article about it.