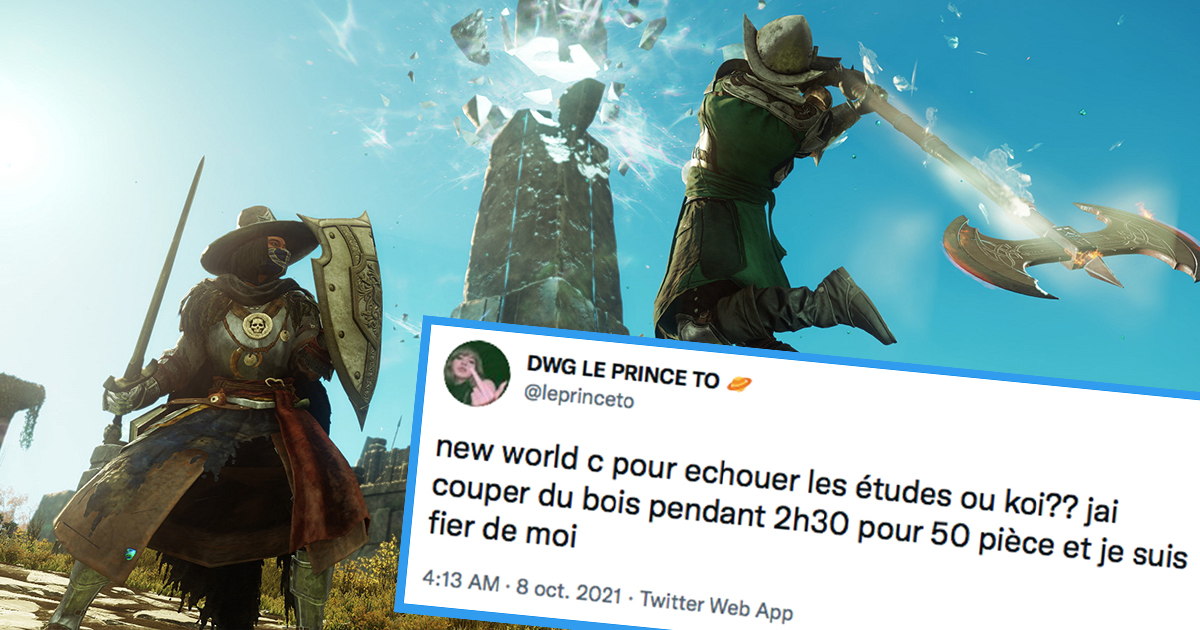 On September 28, 2021, the first fans had the opportunity to experience New World, the latest game and MMORPG from Amazon Games. We decided to spend many hours playing New World to test its many facets and to offer you an article that should be as complete as possible.

Freshly connected, we are stranded on the island of Aeternum, the decoration of which is reminiscent of the 17th century. It is indeed an alternate version of this time, and at this time a powerful evil is overwhelming the island. The flora and fauna (which, as you will soon see, are not always very inviting) are constantly regenerating, even when they seem to have depleted their whole being.

This does not prevent Aeternum from being extremely sought after by adventurers around the world. But are we really happy beings? By stranding on this so-called cursed island, we have become immortal beings who must join factions to fight an evil force, the Azoth. This dark force transforms the living beings of this island into “changed” ones, and it takes courage, determination and a lot of patience not only to survive but also to discover all the secrets that surround Aeternum and Azoth.

When we started playing New World we first selected our server (in our case Kaloon) and then created our avatar. Amazon has gone for sobriety when it comes to personalization. Here you cannot select creatures that belong to a fantastic genre (such as orcs or fairies). You are a full person, you can still choose the cut, skin color, eyes and the location of markings, scars and patterns that the latter may have on the skin.

The game really starts after you customize your avatar, and after just a few hours of gameplay, we learn that in New World no one really fits any particular class. No tank, healing, or DPS as we usually understand it. You will simply embody these roles depending on how you play, what stats you prefer, and what gear you choose. If you are a little lost at the beginning of the game and you do not know how to distribute your characteristic points, do not be afraid: you can start your distribution from scratch and free up to level 20.

The same goes for your weapons, which you can upgrade in a number of ways. Regarding the latter, two trees will be available each time, so you can focus more on the “class” that you value most. It will also be possible to equip two weapons at the same time and switch them during the game, all this will allow you to let your imagination run wild: you can simply switch from sword to hammer or glove or, on the contrary, prefer two similar weapons.

A map we loved to search

One of the strengths of New World is certainly the feeling of freedom that the game offers. You don’t necessarily have to complete weekly quests, but different types of quests will be available each day depending on the Äternum location. There is also a high quality soundtrack that goes very well with the discovery of the different regions of the island. It should be noted that you will not have horses or other mounts to explore the land in front of you: so prepare to walk as long as necessary to see it all for yourself.

Since we mention the quests, as we mentioned earlier, there are a certain number of them that you can complete and they are divided into several categories, some of which are here:

You will understand, you will always have something to do.

On the handicraft side …

If you’re in the mood to get started with New World, we hope you have at least a little fun doing crafting. Trading is indeed an essential aspect of the game as it allows you to craft items that you will need from the beginning of the game and in its entirety. It’s up to you to make travel rations, potions, and dungeon keys with your own hands! All trades are interesting for this: from stonemasons to lumberjacks to fishermen. And that’s a good thing, because here you are absolutely not limited to a single trade. Alchemy seduces you, but do you also like to fish in the last light of day? Everything is compatible!

The progression levels that are there for each profession are going to unlock more and more interesting recipes, but we warn you: you will have to spend long hours doing all these crafting activities or you will totally miss the game, you just have to balance things out by opening new areas visit and gradually collect what you can. We repeat it to you: don’t get depressed, you will get the resources of your dreams in the end.

New world will make me depressed, 5 p.m., that I mine continuously and always zero emptiness ……

join a camp, that of the factions

Reached level 10 and after completing the start quests you can take a closer look at the factions. There are 3 of them and they are clearly the cornerstone of the PvP game in Aeternum. The factions mark camps across the island, and as your faction controls new areas, your attacks against the creatures of Aeternum will be more effective. You will also find it easier to find resources and make higher quality equipment. So the more your faction gains power and controls many territories, the more you will gain power yourself.

Here are the 3 factions available in New World:

The Marauders: They are a ruthless military force trying to build a free nation where anyone can thrive, and especially if that person is strong enough. The Shadow: This is a mysterious organization that quenches its thirst for knowledge through cunning and limitless intelligence. The organization hopes to usher in a new era of science. The Dedicated: They are members of a fanatical order that has set itself the task of clearing the island of its heretics and defilers. They are trying to restore justice.

After just a few hours of play, you will quickly understand that there are some aspects of New World that are not accessible to you as a small level. Expeditions, for example, are only accessible from level 25. But is that really a problem? As we play, we understand that New World is gradually introducing new elements for players to understand all of the mechanics.

The multi-content therefore arrives relatively late in the game, but it did allow you to understand in advance what kind of class you were naturally moving towards, or at least what fighting style you were oriented towards. So patiently take the effort and examine Aeternum before accessing the multi-content!

And in the long term?

The discovery of the New World was a very good experience, but one can wonder about the lifespan of this one. First of all, we note on the bestiary page that the game does not renew its species too much, depending on the region. Of course, there are differences in attack and level between certain wolves, which for example can be found in several regions of the island, but a wolf is still a wolf. With some daily quests you quickly get a feeling of déjà vu. Killing a dozen creatures to collect 10 leathers of the type mentioned, for example, is a type of quest that we regularly find.

Several players have also already reached the maximum level the game currently offers, which is level 60. They can craft their legendary weapon, deal with invasions, or even do side quests that don’t exist, but some of them already regret us so “can get to level 60 quickly. Recently, even a player managed to reach level 60 without spilling a single drop of blood.

I’m dangerously close to level 60 in New World! In my opinion it will be ready next weekend.
I am having a great time. I can’t wait to see what AGS has in store for the future of this game, though I have little hope given the business model.

It is therefore difficult to say whether Amazon will manage to ensure that players do not leave the New World in the future, disillusioned with a game that does not offer innovative content for those who have reached the max level.

For our part, it should be noted that our desire to connect with New World on a regular basis was also very much due to the fact that the community present in the game (and more precisely that of the Kaloon server in our case) was extremely benevolent of the time and helped We are happy to help you with the smallest of problems. This is an important precision that can allow a game to gain longevity (especially in the case of an MMORPG).

Players looking for a real sense of freedom should be interested in New World, as their character is not locked in predefined boxes and the player can explore the land of Aeternum at their own pace, with no real obligations or restrictions, with the exception of patience (as with any self-respecting MMORPG). The different regions to be discovered offer very beautiful landscapes, which we sometimes take a closer look at between two fights and quests.

Our experience was very enjoyable and the only downside that comes to mind at the end of this gaming session could be in the future of New World. Indeed, some players who have already reached the maximum level are wondering how Amazon will deal with the future. On our part, we hope that the content will be regularly updated so that everyone can continue to benefit from this ambitious project, which could become a great MMORPG if the successor is secured.

And if you want to know all about the MMORPG scams to protect yourself from, we invite you to read our previous article on the subject.

Hackers steal a billionaire’s identity and set up global fraud

She finds the card games sexist and racist, she creates a completely new version

The anecdotal competition between McFly & Carlito and Emmanuel Macron is over, internet users react (20 tweets)