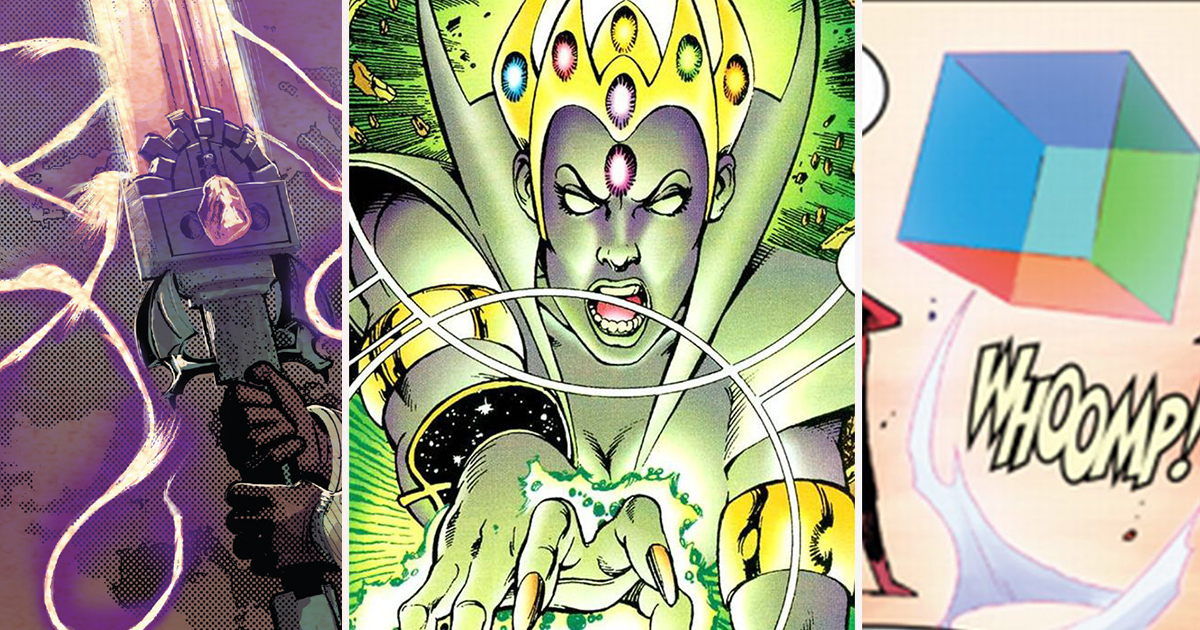 We know the Infinity Stones by heart now, but what about all of the artifacts and Infinity Gems that are present in the comics that we haven’t discovered yet in the MCU? ? We had already mentioned the slightly different story of the Infinity Stones in comics in a previous article and today decided to present not only those that the general public is not yet familiar with, but also objects with overwhelming functions. The world of comics is full of artifacts that could make the MCU even more interesting, especially now that the multiverse is on board. We invite you to discover all these objects and imagine them in the hands of our heroes or the worst supervillain there is.

The Ultimate Marvel Universe (or Ultimate Universe) is pretty scary as it contains not one but two Infinity Gauntlets. To top it off, there are eight Infinity Stones, four on each glove. That’s a lot of power to share! The two gauntlets can be worn by two separate beings or by one and the same unit.

The Hulk in this universe has both gauntlets (as you can see above) and the least we can say is that we don’t want to mess with them. It must be said that he had good reason to blame the ultimates as he narrowly escaped custody and since then he had prepared a revenge as spectacular as it was terrible.

The jewel of the ego

The Ego Gem or the Ego Gem was created during Avengers / Ultraforce. Within that number, the ego gem contains the consciousness of Nemesis I.

Although this stone has not yet appeared in the MCU, it is noteworthy as it protects its power holder from all other gemstones. It was found by Loki before it was kept by Circe (the race of the Eternals). Will it occur in phase 4 of the MCU?

The Continuity Stone is an infinity stone that finds its place in the arches of Deadpool’s story. Deadpool gets his hands on this stone and gives him the opportunity to speak to the comic book authors himself.

More specifically, the Continuity Stone enables Wade Wilson to reunite with Siryn, his ex-companion, in a special edition dedicated to Deadpool’s marriage. The power of the stone actually makes it possible to change the history of Marvel ad infinitum. We would have loved to see that in Infinity War or Endgame! However, Deadpool realizes that the stone is too powerful for him and decides to turn it over to the publishers of Marvel.

In the Ultimates Universe (yes, again) Tony Stark has a brain tumor that is actually in the shape of an Infinity Gem. How is that possible? At the beginning of Marvel’s Ultimate Comics, Tony Stark actually suffers from an inoperable tumor. To make the most of the remaining time, Tony Stark goes to work developing a biotechnological treatment aimed at extending his life expectancy. After this treatment, the tumor changes.

Tony Stark himself realizes this as his consciousness is much more developed. He comes to baptize his tumor “Anthony” to give a name to his new partner, who finds refuge in his skull box. Anthony doesn’t always do Tony a favor, however, as Tony later develops cruel hallucinations. Later, in Ultimate Comics Ultimates # 27, Reed removes an Infinity Stone that developed this way thanks to Tony Stark’s treatment.

The sword of infinity is a cosmic artifact that enables its wearer to become omnipotent. Doctor Doom wanted to acquire it in order to conquer the universe after understanding how it works and how great its power is before anyone else. The latter, however, was attacked by Iron Man, and this duel resulted in the destruction of the sword, which exploded in an incredible number of small pieces called “fractals”.

However, all parts of the sword remained very powerful even individually, as they contain a large amount of cosmic power.

The stone of death appears for the first time in Infinity Gauntlet Vol. 1. 2. It was created by Anwen Bakian, the daughter of Eve.

The latter will induce Thanos to place the Death Stone in his Infinity Glove, which releases an astronomically crippling amount of dark energy. Thanos is killed instantly.

If you’ve played the Marvel Contest of Champions video game, you already know that there are several Infinity Stones in this game.

What you may not know is that while this is a video game, Marvel has confirmed that this universe makes perfect sense in the Marvel Multiverse. Will the new Infinity Stones be in the next installments?

In New Avengers Vol 3 # 16 we find ourselves in a very special reality in which the earth faces an invasion of the combined forces of the Kree and the Skrulls. The planet earth of this reality is ultimately being destroyed by Namor and the Illuminati of earth-616 to prevent an intrusion into their reality.

What we’re interested in here is the shape the Infinity Stones take, which are leaves of color. These can be put together to form a “Forever Glass”, ie a six-sided wish box with which you can achieve anything you want in the universe.

The designer of Daft Punk has created a new high-tech mask with Will.i.am