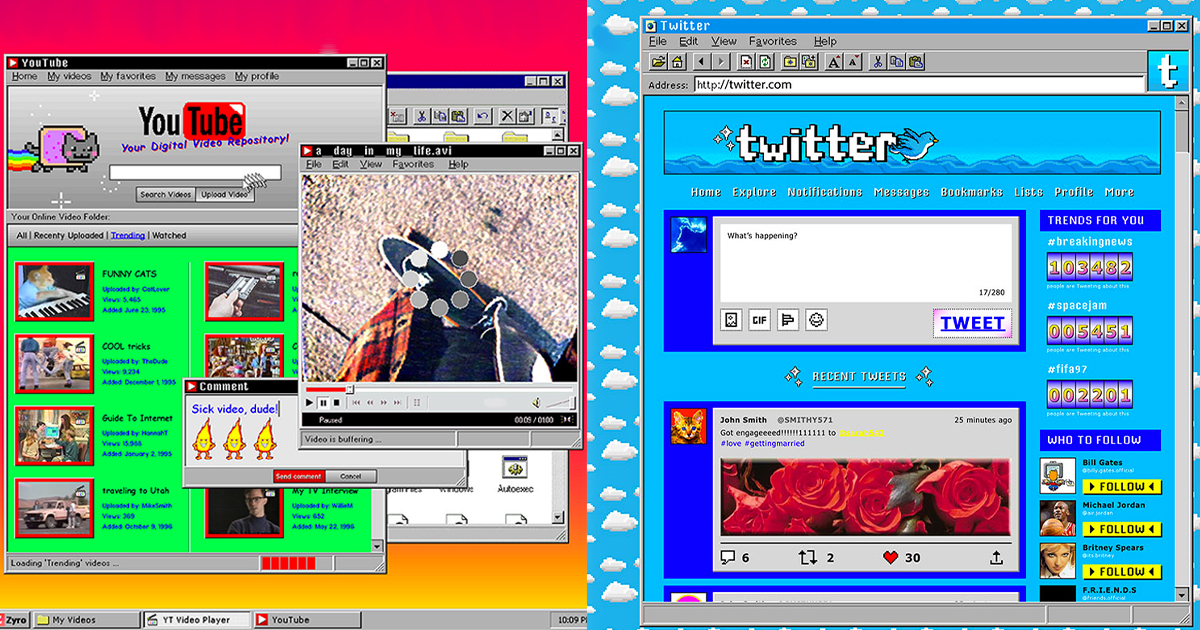 Zyro web developers these days have fun recreating the most used websites but 90s style and the result is absolutely brilliant.

The designers at Zyro, a privately held website building solutions company, decided to redesign some of today’s most popular websites in the 90s style.

Spotify, released in 2006, is perhaps the most widely used music streaming app in the world, and if it had come out in the 90s it would have been delivered on a lime green floppy disk and all of those songs would have been released. were listed without a picture, all in capital letters.

Originally called AirBed & Breakfast, the Airbnb site launched in 2006 was initially pink, blue, and purple. And if it had been made in the ’90s it would surely have been the same colors … And since we’re in the’ 90s, it was entirely possible to see a rent for $ 25 a night.

Disney +, which debuted only 2 years ago, could have achieved even greater success if it had created its website in the 90s by offering its most popular cartoons, coloring pages, and even educational games. Their influence would have been all the more important.

Founded in 2011, Twitch has grown in popularity with streaming video games live. In addition, the platform has become more democratic within a few years and is no longer used only by the players. One can easily imagine that in the 90s racing cars, motorcycles or racing cars of all kinds and even less scandals would have been the main content.

It was impossible to send selfies or make video calls with WhatsApp of the 90s, but it was already possible to send audio messages, photos, gifs and emoticons and that’s great!

Introduced to the public in 2006, Twitter has quickly established itself as the most important social network after Facebook and connects Internet users worldwide with messages up to 140 characters long.

Facebook was founded in 2004 by Mark Zuckerberg, then a student at Harvard, and was immediately successful. Initially, the social network should only be used on the university campus, then gradually expanded to other universities in order to finally be open to the rest of the world.

Since its inception in 2005, YouTube has grown to become the largest video library in the world. Back in the 90s, this video library consisted of thousands (not millions) of videos for you to choose from and of course accessible on a floppy disk.

As for the videos themselves, one can imagine that 90s YouTube was mostly made up of skateboarding videos, people listening to tapes in their cars, online guides, clowns and of course cat videos because it still works.

If after reading this article you feel like posting “Pokes” on Facebook, checking your MSN account, or even playing The Magic School Bus, Marine Malice, Pouce Pouce, or Spy Fox, we understand you and we know So do we … If you enjoyed this article, you will surely love discovering these 30 pictures that will make you nostalgic for the 90s.