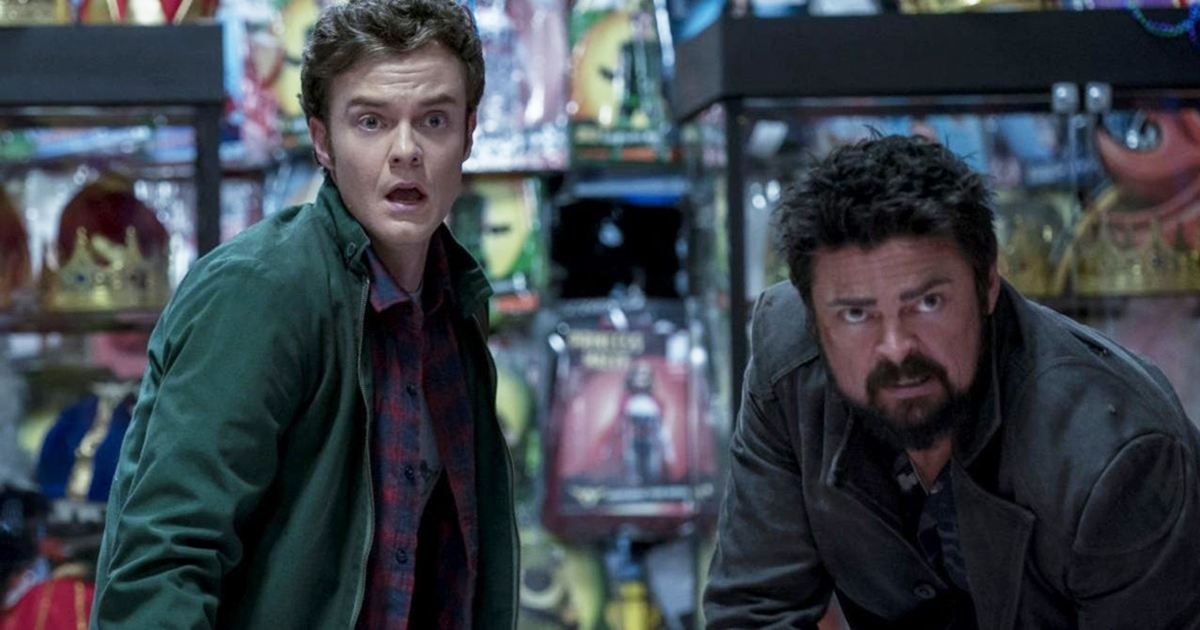 Be careful, if you haven’t seen season 2 of The Boys before, we recommend that you stop reading so as not to spoil yourself.

The loot starts here. We already know a few things about The Boys season three, like the fact that the Soldier Boy is going to matter, or that Shaquille O’Neal could actually be one of the Seven. An emerging thought-provoking theory does, however, hit the headlines right now: Hughie would be the son of a super! How did we get there and what is this theory really worth? We’ll tell you everything.

Hughie in the comics

As we’ll see, Hughie’s parents are very different in the comics, suggesting a new turn for our favorite canary (which, given the end of season two and his new role on Victoria Newman’s team, will likely be used to blows of fate.

Did you know that Simon Pegg, the famous British comedian we saw in the Cornetto trilogy and who plays Hughie’s father, finally inspired one of The Boys’ illustrators, Darick Robertson? ? The first drawings of Little Hughie had seen the light of day before Darick Robertson knew Simon Pegg, but when the designer discovered the actor he had no doubt: Simon Pegg was the perfect personification of Hughie and matched his trait. for line to his drawings. In an interview with the ComicVine site, Darick Robertson said on the subject:

“Little Hughie” is based on an old friend of Garth’s. He insisted that we have to give the character both a form of innocence and great determination. Two character traits that seemed quite contradicting and, oddly enough, he always looked too old in the character’s early sketches. But when I discovered Simon Pegg on the Spaced series, I found that he embodied that balance perfectly.

After that funny affair, Simon Pegg was selected to play Hughie’s father on The Boys series to refer to the features of Darick Robertson in the comics (the actor was too old to play the role of Hughie on the series) . When talking about Hughie’s parents, you should know that they are barely ever mentioned in the Garth Ennis comics. We only know of them that they are still together, married, happy and living in Scotland. Why did you decide to change things on the Amazon Prime series? We suspect that Eric Kripke is hiding something from us.

The theory about Hughie, child of a super

Until the eighth episode of the second season of The Boys we thought Hughie’s mother was dead. This was due to the atmosphere in Hughie’s father’s house and his relatively sad expression. However, in the episode in question, we learn from the mouth of Hughie that it is not. During a conversation with Starlight (Stella), the latter actually reveals to him that his mother left her when he was barely 6 years old. Hughie makes it clear that he has absolutely no idea why he left, which leaves one big doubt: Could it be that Hughie’s mother was facing Vought years before her son? In any case, it would be very surprising of Eric Kripke to have introduced this anecdote in the next few seasons without using it, knowing that this story is very different from the one presented in the comics.

But why would you think that Hughie’s mom could be a super, and not someone like Butcher, who chases Vought and that she had to leave to protect her family? The first indication of this is in the exact wording of Hughie, who states in VO:

It was like going off a silent alarm and she said, fuck her, time to go!

(It was like a silent alarm went off and she said to herself, shit, I have to go!)

If Hughie’s mom were indeed a Supe, this phrase would be extremely illuminating as it would have to be taken literally: she could have been called by Vought, or just called to take action. Then we could instill the show’s bias, which generally appreciates showing dysfunctional parent-child relationships on screen (Stella and her mother, Homelander and her son, Butcher and her abusive father …). The introduction of Hughie’s mother in season 3 could therefore stick to the line that the series has wanted to follow since its inception.

Third strength of this theory: if Hughie’s mother defied Compound V, her son should be compatible with Vought’s famous product too. So when Compound V hits the market, Hughie could be faced with a choice in season 3: deciding whether or not to get injected, a tempting scenario that could complicate his mother. We suspect Hughie may not take the risk of injecting Compound V, but if his own mother tells him he is not risking, how will he react?

While you wait for the third season of The Boys, you may already be interested in the upcoming Amazon Prime series Invincible, which focuses on violent superheroes. We also leave you a poll under this article for your opinion on this theory.