9 reasons you would have hated being the Hulk 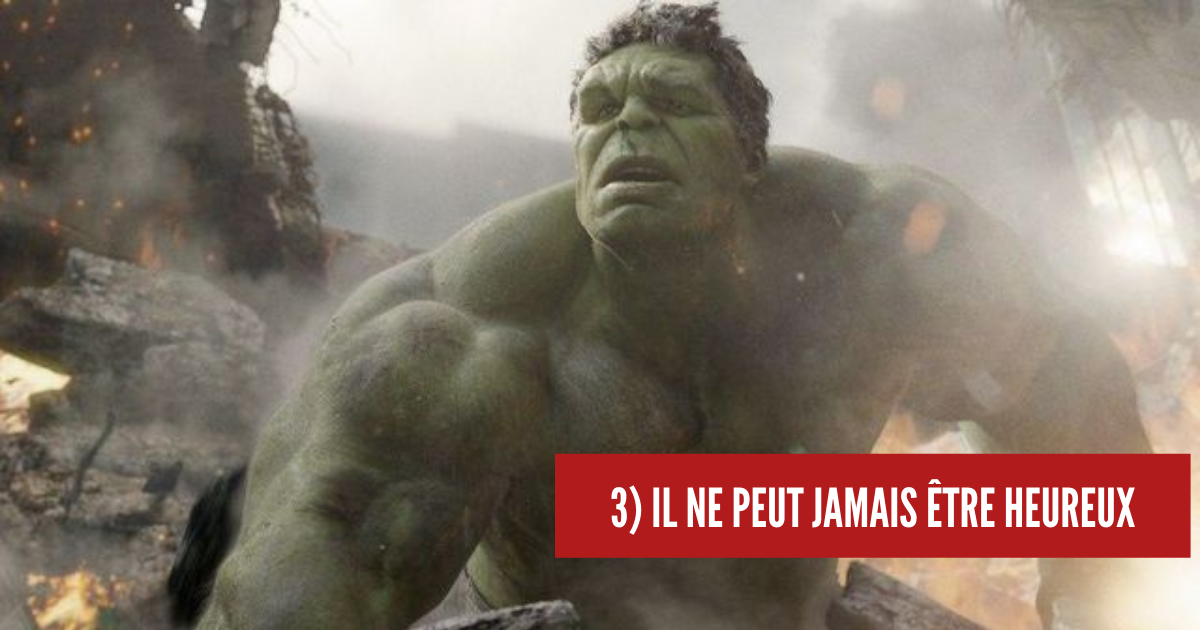 While the Hulk is one of the most powerful characters in the Marvel Universe, this supersized power can translate both a curse and a blessing. We recently introduced you to this dark and fearsome new form of the Green Titan, a chance to learn more about Bruce Banner’s checkered past. In many ways, therefore, being the Hulk is tantamount to being a curse. And if some superheroes have an easy life, that’s not really the case with Hulk. His life is probably one of the toughest of any Marvel character.

What at first glance may seem like a promise of support is in fact sometimes more like a hostage situation. Because some of Bruce Banner’s psychological issues are the making of the Hulk. And Banner sometimes despaired of his existence as the Hulk, to the point where he attempted to end his life. But Hulk rarely thinks so, quite the opposite. He has become a separate being and is not determined to end it that way. Every time Banner tried to kill himself, the Hulk would take control to stop him. Banner once attempted to jump off a building but transformed before hitting the ground. He also attempted to shoot himself in the head but turned into the Hulk before the bullet hit him. Banner has tried many, many different times, but the Hulk will certainly never allow it.

8) He feels pain all the time

Gamma radiation made the Hulk what he is, and that’s not all good. Because if Hulk is fueled by Banner’s anger at the world, his anger also comes from suffering constantly. Gamma rays burn inside him, and as he transformed into the Jade Colossus, the pain stretched him to the limit. The sentry’s presence managed to numb the pain and over the years he learned to live with it. This is certainly no excuse for any bad deeds he may have committed, but it at least provides a good justification for that sometimes unbridled anger.

7) Bruce Banner’s life was destroyed by his alter ego

For a long time, the Hulk’s biggest enemies weren’t supervillains, but military men and other superheroes. Bruce Banner’s identity is not a secret, so everyone knows his moves. And unlike the others, Bruce Banner rarely gets to live a normal life. The best he can hope for is to work with organizations like SHIELD, but he’s almost never able to live a life outside of the life he shares with the Hulk. And the thing is, the Hulk has done some unforgivable things and destroyed as many lives as a supervillain before. As a result, it is impossible for Banner to have any hope of a quiet life, as he is forced to live sometimes in hiding, sometimes in the ruthless world of superheroes.

6) Hulk and Banner have long hated each other

The Hulk and Banner’s relationship has long been controversial. Although there have been times when they have worked together, most of the time the two hate each other. Banner realizes how the Hulk ruined his life and has often gone to extreme lengths to finish off the Hulk. And Hulk, for his part, hates Banner for his weakness. Hulk is proud of his power and the freedom it gives him. He views Banner as an obstacle because Banner keeps him from living his life fully. He also knows that Banner would destroy him if given the chance. The hatred between the two characters thus stood in their way for many years.

5) Hulk will never be fully a superhero

Hulk is very different from other superheroes in the Marvel Universe. While many of them have run afoul of the government, it is not at the level of the Green Titan. The Hulk caused untold destruction and gave him a near-constant threat status no matter what he did next. Working with superhero teams like the Defenders or the Avengers doesn’t help much either. Because in the eyes of many, the Hulk is and will always be a monster. No matter how he helps save the world, the threat he posed and the fear he inspired still hangs over him.

4) Banner can be as bad as the Hulk

The Hulk comics have developed many alternate stories. One of them was to cast Banner as a villain. While it does happen that other heroes go bad, Banner is very different. He was tormented as a child, which aggravated the mental turmoil that would later give birth to the Hulk, but it also made him capable of doing terrible things. Bruce Banner was changed by his past and the appearance of his alter ego, and while Banner wasn’t often as bad as the Hulk, there were times when the Hulk was the best version of them. Hulk sure is a monster, but Banner can be just as terrifying.

3) He can never be happy

Hulk doesn’t have a good life, to say the least. And yet there were a few rare moments when the Hulk and Banner found love, or at least a life they enjoyed, but never got to keep it for long. Bruce married Betty Ross but their relationship ended and was never rekindled. Hulk loved being Joe Fixit, but that also ended. Planet Hulk even saw Hulk find true happiness, but that didn’t last either. If the Hulk has done any significant damage over the years, there have been times when he just wanted to live a quiet life without being disturbed. But neither Banner nor the Hulk seem entitled to it.

2) Bruce Banner was horribly abused as a child

Bruce Banner’s father was a violent alcoholic. He hated Bruce and was jealous of him, believing that his son was getting all of his wife’s attention. He ended up killing the latter and eventually Bruce killed him. All of this left a deep trauma that led to the appearance of the Hulk and is key to the character’s numerous changes over the years. So you could say that Banner’s life was somehow shaped by his abuse. He never got a chance to have a normal life and all this anger came out when the accident happened and he let go of his alter ego.

1) All Hulk futures are terrible

There are certain destinies of characters in the Marvel Universe that seem to be constantly heading towards something increasingly dark. And that is unfortunately the case with our Green Titan. In almost every future, the Hulk ends up either as a villain or a monster, often both. There is a future where he is known as the Maestro and where he killed everyone, heroes and villains alike, and created his own kingdom. In the future of Old Man Logan, he joined the villains in slaying superheroes and ruled his own territory with an iron fist with his Hulk Gang. And in Hulk: The End, he was the last living thing on earth. It looks like the Hulk is facing an unfortunate ending that will bring death and devastation in his path.

And to continue in the same topic, here is the unbeatable technique to be able to defeat Hulk with your bare hands.