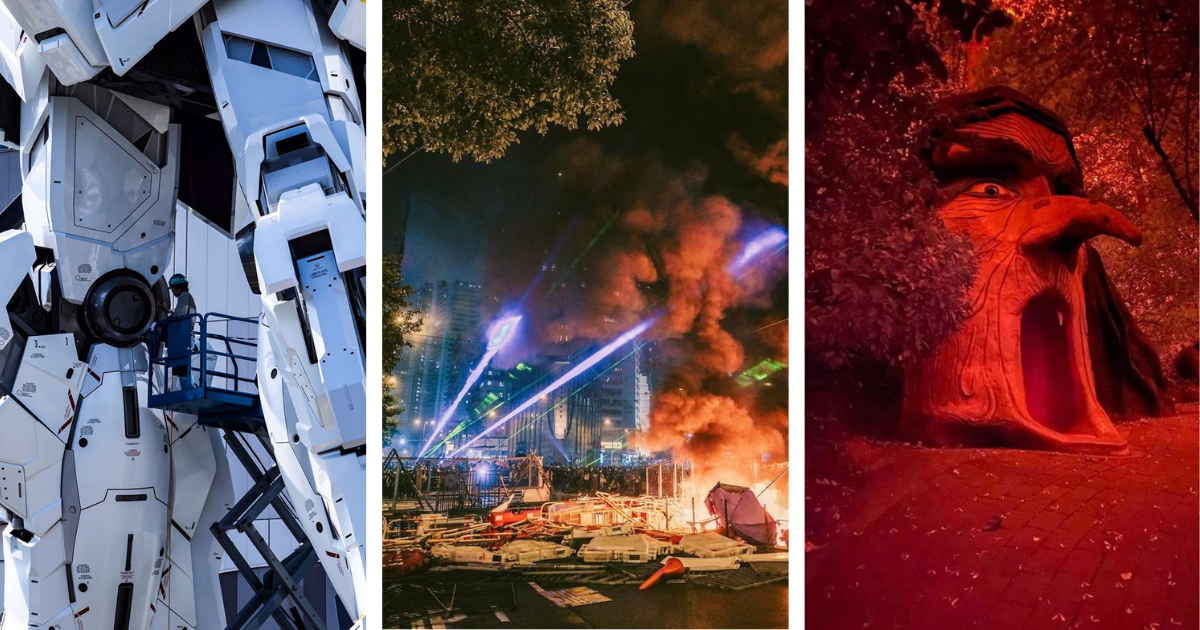 Life can seem boring. Fortunately, the landscapes of movies or video games are there to cheer us up and make us dream.

However, sometimes the reality far exceeds our expectations, thanks to amazing optical illusions or breathtaking landscapes. So much so that these pictures look fictional.

From Grand Theft Auto to Star Wars, it’s sometimes difficult to tell the difference between screenshots of games and real photos taken at the right time and place.

Today we invite you to discover 45 very real photos that look like they were from a video game or special effects movie.

# 1: This sunset photo looks like a screenshot from GTA

# 2: It’s not a Skyrim, but the Imperial Corridor of the Prachov Nature Reserve in the Czech Republic

# 3: Performed in Missouri, this fire seems to be out of a movie

# 4: A door covered with self-adhesive mirror paper feels like a portal to another dimension

# 5: With The Fog, this stadium looks like a flying saucer

# 6: In HONG KONG, recent protests are making the city look like a galactic battlefield

# 7: This panel gives the impression that we are embarking on a game-quest VIDEO

# 8: The reflection of the lights in the room on the glass makes it look like the sky has a hatch (unless it’s a texture flaw?)

# 9: IN BEVERLY HILLS, this private residence seems straight out of a fairy tale

# 10: In Chile, a cloud of volcanic ash looks like a giant monster summoning

# 11: In Japan, this worker working on the giant Gundam-inspired robot is looking straight out of the Pacific Rim

# 12: Oregon’s Enchanted Forest looks like the entrance to hell because of a fire

# 14: Air pollution makes you feel like you are playing flight simulator in low resolution

# 15: This building in Luanda, the Angolan capital, is straight out of a science fiction movie

# 16: These lights look like the start of a quest

# 17: This picture makes it look like a character has not yet been unlocked

# 18: In Poland, this landscape seems to come straight from the witcher or the red dead redemption

# 19: This ancient Japanese village looks like the set of a movie

# 20: The “business room” of this apartment appears to be taken from a video game developed by Valve

# 21: Thanks to the sunlight and polarized lenses, this freshly paved asphalt looks like Mario Kart’s rainbow road

# 22: Long Exposure This shot of drones circling the mountains comes straight from an SF movie

# 23: These antennas on the Sutro Tower in San Francisco look like a ghost ship

# 24: With the right light, it’s super easy to put a kid’s photo on a horror movie poster

# 25: Everything indicates that this is a screenshot of a video game. In reality, however, this photo was taken in the Wieliczka Salt Mines, Poland

# 27: This roof appears to be from a Nintendo game

# 28: A skyscraper that could easily find its place in a cyberpunk universe

# 30: In Roswell, this Mc Donald was built in the shape of a UFO

# 31: No, it’s not an alien breed. This Japanese observatory aims to detect neutrinos, subatomic particles

# 32: Stray reflections make this man appear to be creating a non-volatile force field

# 33: light makes it look like a quest trigger point

# 35: This is what happens when you hit the end of a card in real life

# 36: Shade makes it look like a bug is floating this car

# 37: Everything indicates that this distributor is a quest target

# 38: This shot of a rifle scope looks like it was captured by an FPS

# 40: In Dallas, the hallway of an unheated apartment looks like a titanium scene

# 41: The way the snow is melting in this university’s backyard makes you think of pixelated soil

# 42: This building can be invisible

# 45: In Seattle, the space needle sticking out of the clouds looks like the cloud city from Star Wars