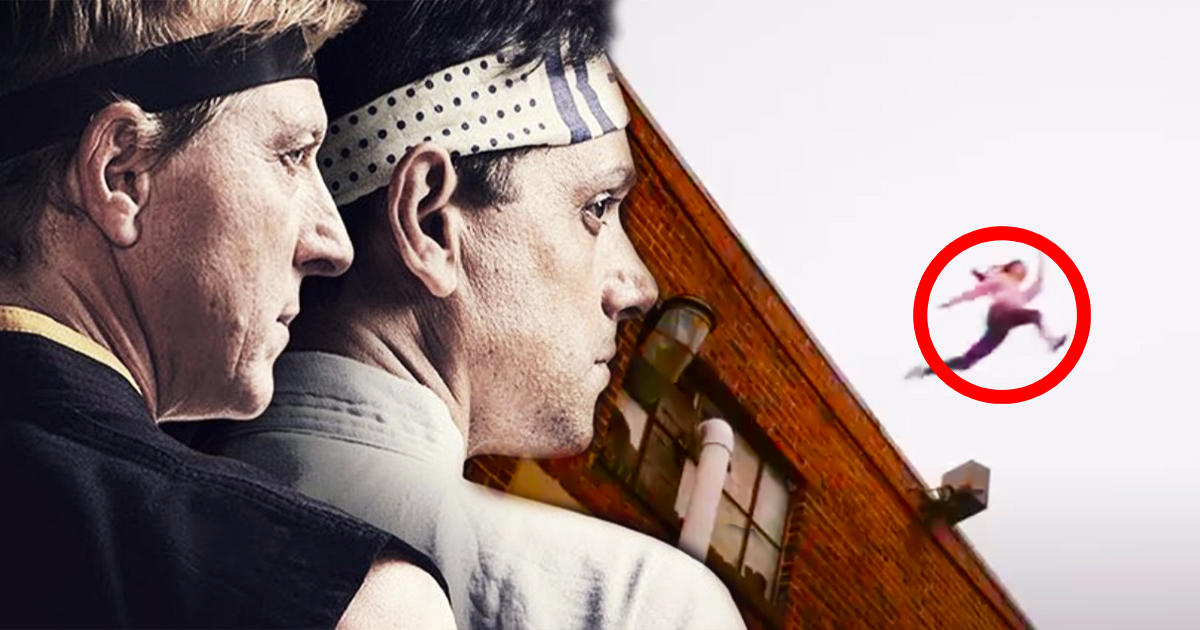 The trailer for season 4 of Cobra Kai was released on August 5, 2021 and, despite its short duration, impressed us with so much information. In this article, we want to come back to the 16 most beautiful Easter eggs that we saw in said trailer to understand what to expect in this fourth season. Before we start, you can check out the trailer below:

Now that you’ve watched this trailer, here are the 16 Easter eggs we’ve listed in this video:

16) the All Valley Karate Championship logo

The season 4 teaser begins with the promise that “Karate is coming to the greatest stage in the world: the All Valley Karate Championship”. The All Valley Under-18 Karate Tournament was previously held in the Karate Kid franchise and was always won by Daniel LaRusso. In season 1 of Cobra Kai, the latter was won by Miguel Diaz. However, the new logo presented to us does not contain the designation “Under 18”. Could that mean adults can compete in their own division for the first time? So will we be approaching an outcome of the rivalry between Daniel, Johnny and Kreese?

15) the duel between johnny and daniel

The season 4 trailer for Cobra Kai reminds us that the All Valley Karate Tournament is “the place where legends are born”. The teaser reminds us of the most emblematic moment in the history of the competition, when Daniel defeated Johnny in 1984. This moment was mentioned several times in the Karate Kid and Cobra Kai movies. Will the season 4 show give us such an epic moment?

14) Miguel Diaz in the spotlight

Miguel Diaz is the reigning All Valley Champion, and he looks like his hair has grown and he looks particularly fit. Within months of becoming champion, Miguel was almost killed, and Johnny went out of his way to help him go through his unorthodox rehab methods again (in season 3). Still recovering, the character didn’t seem ready for competition. It looks like Miguel’s miraculous recovery is set to continue and he is now ready to double his tournament title.

Demetri’s story is surely one of Miyagi-Do’s friendliest and most unlikely success stories. Cobra Kai fans have seen this character slowly gain confidence and become more and more powerful over time. Demetri even became Yasmine’s friend. It now appears, according to this trailer, that the protagonist has improved so much that he can take part in the All Valley tournament in season 4 of Cobra Kai. Could Demetri be a potential candidate to win the tournament? We can’t wait to find out.

12) The legacy of Daniel Larusso

We note in this trailer that Samantha LaRusso will be competing in the All Valley tournament. She is the first LaRusso to compete in the tournament since her father Daniel won his second championship in The Karate Kid Part III. Sam carries not only the legacy and reputation of the LaRusso family on his shoulders, but also that of the best student of Miyagi-Do. As if that weren’t enough, Sam also has to face his archenemy, who is none other than Tory Nichols. It remains to be seen if Sam and Tory can settle their differences during the tournament.

Johnny started a new dojo in Cobra Kai season 3 and chose red as his color, but it looks like the latter is back in black in Cobra Kai season 4. Johnny had to make a decision that he would not leave the monopoly of that color to John Kreese. The fact that Johnny is wearing black in this teaser could also suggest that he will regain control of the Cobra Kai dojo in Season 4.

It looks like Robby Keene took on a new haircut in Cobra Kai season 4. Remember, Robby had long hair in Cobra Kai seasons 1 and 2. Robby also spent time in a reformatory and was eventually won over by Kreese’s suggestion. Robby also lost to Miguel in the Cobra Kai Season 1 All Valley Tournament, and he will no doubt seek rematch in the Season 4 Championship.

Hawk had decided to take a path to redemption in the season 3 finale of Cobra Kai. The character has found his original circle of friends (along with Miguel and Demetri), but it could be very difficult for him to let go of his past completely. It could be that he will become an even better fighter thanks to Johnny and Daniel and that he will continue to have the “level of insanity” that makes him such a violent character.

8) the blue carpets of all valleys

We find, like in season 1 of Cobra Kai, blue carpets for the tournament and not red and white carpets like we could see in the Karate Kid films. This is a stylish update that season 1 organizers were very proud of.

7) tory and robby are going to fight

In the season 4 trailer, we discover a short sequence of Tory jumping on Robby in Cobra Kai’s dojo before he climbs on top of him and prepares to hit him. Initially, Tory and Robby’s attraction came from the rejection of their respective ex-boyfriends Miguel and Sam, but obviously Kreese’s best students are coming together.

Daniel and Miguel train together, while Hawk trains with Mitch in Miyagi-Do. Daniel began connecting with Miguel in Season 3 of Cobra Kai, and he explained the events in Karate Kid from his perspective. Sam was initially concerned that Miyagi’s and Johnny’s karate styles might not be compatible at all, but it appears that Miguel actually adopted Daniel’s teachings as well as Johnny’s.

5) Daniel and Johnny together

4) Sam jumps over the rooftops

In the trailer for season four of Cobra Kai, you can see Samantha making a pretty impressive jump between two rooftops. Several hypotheses come to mind, either LaRusso is running away from members of Cobra Kai who are chasing them, or Sam just wants to test his courage and agility to improve. Anyway, Sam’s stunt shows how advanced this is.

3) the return of terry silver

This teaser also shows us a take of Terry tying his famous ponytail. Terry is now about the same age as Kreese, and his long hair is now gray instead of pitch black, but Karate Kid III fans are more concerned than ever with this character tormenting Daniel LaRusso again.

Cobra Kai Season 4 showed its new logo, which shortened the title to “Cobra Kai IV”. Just as the Karate Kids were inspired by Rocky, Cobra Kai adopted the Roman numerals from Rocky in their title, to give the series the look of an epic saga. Cobra Kai started this training last season and titled the series “Cobra Kai III”.

The trailer for season four of Cobra Kai ends with a humorous excerpt from the season three Christmas party, in which Amanda LaRusso jokes Ali. Through this joke (about the respective pasts of the Dojos and of Johnny and Daniel), Amanda refers to the actual issues that Cobra Kai was addressing. The show directly concerns the struggle of children and young people for their happiness and survival in the face of violent extremism that is John Kreese’s. A nice finale that makes us gobble our eyes even more in this fourth season.

Have you discovered all of these elements on your side? Don’t hesitate to share your impressions with us in our comment section! And if you like both Cobra Kai and How I Met Your Mother, you can find the connection between the two series in our previous article.