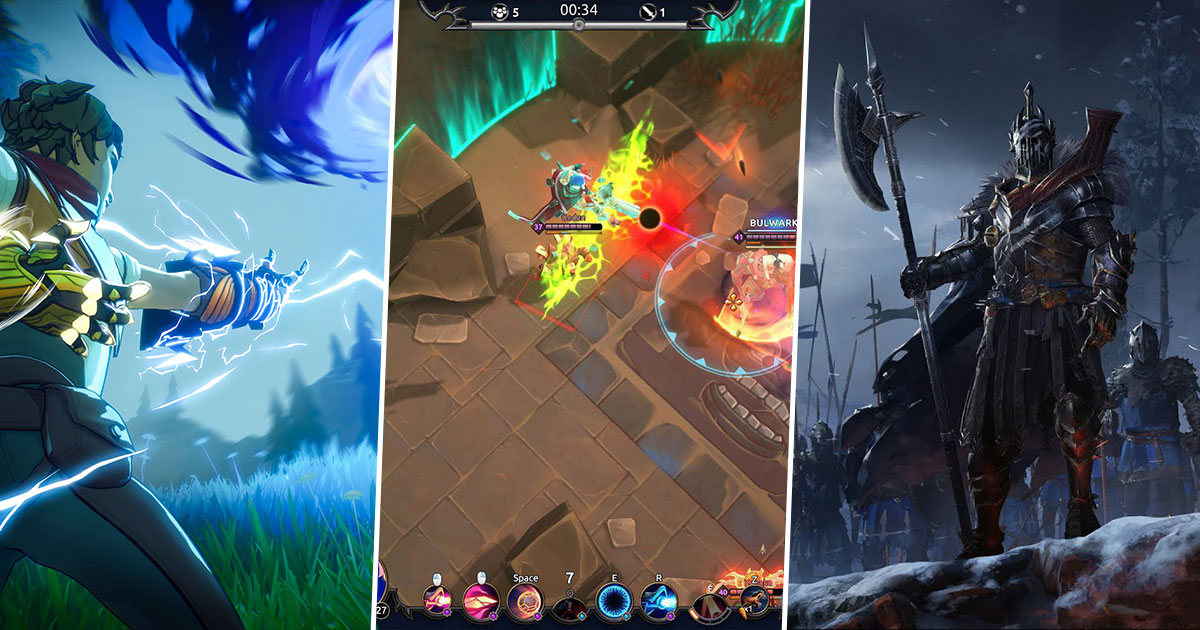 The world of video games is changing. The multiplayer mode is becoming more democratic, as is “Game as a Service”, whereby free access is emphasized through micro-transactions of all kinds. Difficult to know where to turn. The opportunity for us to get you started with 15 free PC games.

Free games are known, but not necessarily for everyone

In 2017, we introduced you to 15 great free PC games. A first series with big names in the genre such as League of Legends, Hearthstone or Path of Exile. For this new selection, we’ve decided to stray a little off the beaten path. 15 games known, but not necessarily by all that didn’t exist or wanted to pay in 2017. A second version that will eventually allow you to get down to your next weekend occupation. Most of the little-known games that might grab your attention.

This is the promise of Spellbreak, a battle royale between wizards. An action-packed multiplayer game in which players each take on the role of a battle mage. Collect equipment and powers and defeat your opponents to the last to be the survivor of these enchanted battles. Choose your class and immerse yourself in the Hollow Lands, an ever-changing world. Multiple game modes are available to you in this free title, benefiting from 84% positive reviews on Steam for more than 5,800 reviews.

Surprised last September, Genshin Impact is one of the revelations of late 2020. An RPG-like gacha like The Legend of Zelda: Breath of the Wild whose universe expands with the updates. As the weeks go by, new characters will pour in, giving players a chance to find them to add to their squads. And while the gacha genre drives buying, Genshin Impact lets you finish all of the content without spending a dime. A cross-play title for mobile phones and PCs.

Even though Warframe started many years ago, it continues to be updated. The title Digital Extremes is still free and has changed its behavior. From now on, the additions to content should be more sporadic, but more refined and noticeable. So the next big update is planned for next spring. A game in which you play as a human fighter thanks to skills that give mobility and strength. It is up to you to jump from planet to planet to maintain balance in the solar system.

As of October 2019, Destiny 2 will be free. Although the last two expansions are still chargeable, the base game and the expansions are “The Curse of Osiris”, “The Guardian Spirit” and “Forsaken”. Dozens of hours of play available to everyone, enough to delight shooter enthusiasts. For those unfamiliar with Destiny 2, play as the Guardian among the three classes available. The last city on earth is attacked by the Red Legion. If you accept this, your job is to defend it. Collect weapons and armor and unlock new skills as you explore the solar system.

The name may not ring, and yet Conqueror’s Blade is particularly popular with fans of the genre. Take control of a commander in this open world inspired by medieval and feudal civilizations. Lead your carefully selected and expanded troops to face your opponents. Your commander, whether in hand-to-hand or long-range combat, has skills that can make a difference in combat. Choose a turn-based strategy or a real-time tactic and win sieges and defenses. A free title that features grandiose battles where you are the center of the confrontation.

Helltaker describes itself as a short puzzle adventure game in which you will see well-dressed demons. This indie game takes you straight to hell in the middle of a Succubi harem. It is up to you to find your way through the twists and turns of this kingdom in hopes of granting all of your desires. A title that borrows certain gameplay elements from flirting games. Obviously free as it has seduced Steam users in this selection. The proof is that 98% positive reviews are shown for more than 88,000 reviews.

Browser game, but Shakes and Fidget is played over time. This award-winning multiplayer role-playing game features comic book style, quirky humor, a guild system and endless battles. Create a hero there and face both monsters and other players. Collect gold and buy your equipment for even more difficult tasks. A little game that started in the background and could be the revelation for you for the next few years. It remains to be seen if you stick to the game’s particular style. A game that got great ratings on Steam: 92% positive ratings from over 17,500 ratings.

Though the Battlerite Royale hype has been over for some time, the game is worth a look, even if the Z-LAN’s announcement has given it another breath. A free game with gameplay that is easy to learn but difficult to master. Take control of one of the characters at your disposal and jump into an intense arena alone or with others. In this shrinking environment, collect equipment and upgrades for your spells and force yourself to meet other players. With its top view and explosive gameplay, Battlerite Royale will win you over immediately. And while no new content is planned, Battlerite Royale can please PvP enthusiasts.

Call of Duty: Warzone, arguably one of the most popular free games of the moment, had to be included in this pick. In Battle Royale, which is set in the Call of Duty franchise, Warzone evolves across the various opus. Its weapons, operators, and vehicles change and adapt. Players therefore benefit from a breath of fresh air with every new version, especially as the developers use this popular battle royale to tease the next versions. The players can play the detectives and question the various changes.

Available on both mobile and PC through your browser, Cube Escape is an excellent series of escape type puzzle games. Immerse yourself in an enclosed space designed like a cube and solve all kinds of puzzles that will always take you to one place: Rusty Lake and its fun phenomena. Play as a detective in this series of 10 games in which his memory is locked in mysterious cubes. Investigate the appearance of a strange woman, but also the unusual appearance of animal people.

Dwarf Fortress is an indie game par excellence and will appeal to fans of management and roguelike games. Control a community of dwarves and survive the dangers of life. A title that requires patience and learning before mastering it, but which seduces by its complexity. Guide your dwarf pioneers in the “Dwarf Fortress” mode or venture alone into a randomly generated open world in the “Adventure” mode. Harvest them

The Battle Royale has convinced many players for a number of years. The opportunity for competition enthusiasts to indulge in frenzied games that end up with only one player left. And in NERTS! Online, Battle Royale combines with Solitaire for a multiplayer challenge. In this special time trial, up to 6 players can compete against each other in order to complete their card game as quickly as possible. A game that has already found its followers on Steam, where it received 94% positive reviews out of 607 reviews.

In November 2017, Blizzard made the decision to make StarCraft II, its RTS-free storage space. The opportunity for fans of the genre to immerse themselves fully in this pantheon of video games. A title that not only made the studio shine internationally, but also contributed to the democratization of esports. In StarCraft II, you control one of the playable races and fight to develop an initial base by collecting resources to build buildings and units. When you face other players or the computer in campaign mode or practice games, lead your race to victory by destroying your opponents to the last.

Diablo II is available for free on the Blizzard website and is a reference in Hack’n Slash. A title that is particularly appreciated by lovers of the genre and needs to get a facelift this year due to an expected revised version. And look no further, Diablo II is completely free. Even if the graphics are not as fresh as they used to be, with this availability you can immerse yourself in or re-immerse yourself in one of the best games of its time.

Half MOBA, half Battle Royale, Eternal Return: Black Survival is above all a survival game in which the player has to survive alone or in a team. Among a multitude of characters with different abilities, the lucky ones of the day are released on the island of Lumia to easily kill each other. On the menu: PvM but above all PvP. By aligning with the environment, among other things, various objects can be restored, which together enable the manufacture of more powerful devices. Hence, it pays to explore certain regions to find the items needed to craft your optimal gear.