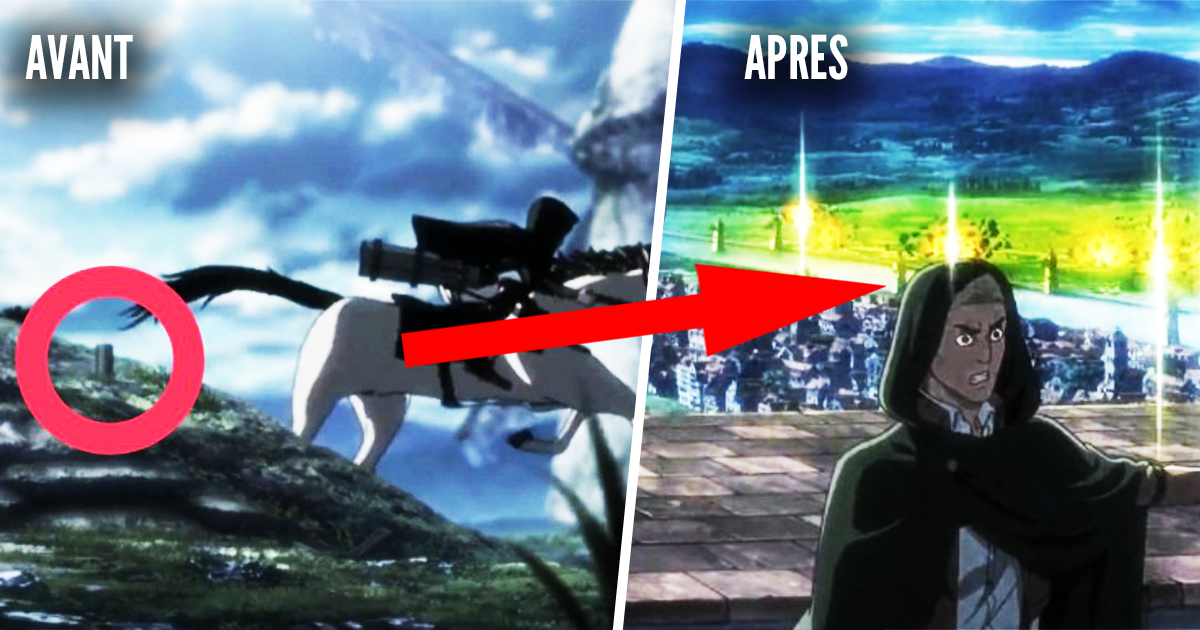 Attack on Titan fans around the world are numerous and particularly committed. We recently told you about a huge copy of the manga being sold for a record price, and today we wanted to go into the many very interesting little details that have crept into the various seasons of the anime, and we haven’t always done that just right at first glance. So here are 15 details that at SNK you have probably overlooked at first glance!

WARNING: This article contains loot for all previously released Attack on Titan episodes, including those from the first part of Season 4. Don’t read any further if you don’t want to read it.

The dream Eren has in SNK Episode 1 goes straight back to Willy Teyber’s family, who won’t appear until season 4 of the anime.

In episode 3 of the first season, Eren injured his head. We can see a little smoke coming out of his head, a sign of regeneration.

4) Sieg and his army hid underground in Shiganshina

At the end of episode 50 (season 3), Sieg launches an attack by summoning an army of titans around Wall Maria. In a short scene that you can see above, we notice a small pipe sticking out of the ground. The Eldians, transformed by victory, were actually hidden underground and could breathe through these pipes.

5) Reiner has his hood off so Annie can recognize him

In the female titan arch, Armin asks all his companions to put on their hoods so that the female titan (aka Annie) cannot recognize them. During the mission, however, Reiner removes his hood so Annie can recognize him. At this very moment we see Annie smile slightly at him.

As you can see in this picture, Bertolt was about to bite himself to transform into the colossal Titan at Utgarde Castle.

Carla, Eren’s mother, willingly sacrificed herself to save Eren and Mikasa by explaining that her legs got stuck and stopped responding. In fact, her legs fight and kick in the scene where the titan is lifting her up.

9) an interesting parallel between mikasa and eren

An interesting parallel was drawn between Eren and Mikasa: the two characters awakened their respective powers when the other was in danger.

Perhaps you noticed that Bertolt had a strange way of sleeping? Well, it is very likely that this position is a reference to the Hanged Man card that we find in the Tarot and that is represented the same way. It is interesting to know that the Hanged Man in Tarot card is the only one that depicts an infamous painting. This type of painting saw the light of day in Italy in the 14th century and represented everyone guilty of various crimes, from treason to murder. This is an indication of the betrayal already underway by Bertolt.

12) Young Reiner, Annie and Bertolt can be seen briefly in Episode 2

The scene seen above was seen both in episode 66 and in the credits of episode 59, the last episode of SNK season 3.

15) Sieg’s ceiling is an allusion to the bestial Titan

And did you discover all these elements in the anime on your side? We can’t wait to hear your feedback in the comments section! And if you want to keep your swing going, you’ll always find our before and after between the characters from SNK created by Wit and those created by MAPPA in Season 4.

Don’t miss the Razer Mamba Elite gaming mouse, which is almost half the price