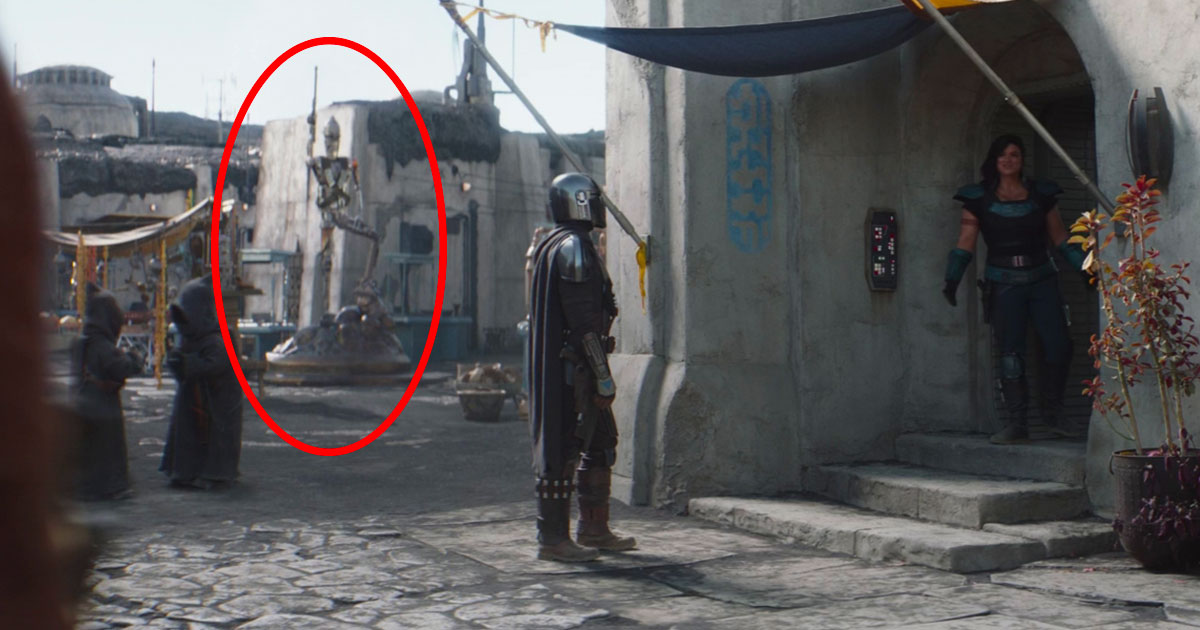 In this episode, Din Djarin returns to Nevarro, a planet we saw several times in season 1. There he finds Cara Dune and Greef Karga, who have led a peaceful life since taking over the city. .

The droid was shot down by the Mandalorian in the first episode of season one before returning for one final battle in the penultimate episode. This IG-11 is indeed disabled and a tribute statue is on Nevarro.

At the beginning of the episode, Greef Karga and Cara Dune are confronted with a gang of looters. The latter are Aqualish, a type that appears regularly in the Star Wars saga. The best known is of course Ponda Baba, the alien who attacks Luke and has Obi-Wan’s arm cut off in A New Hope in the cantina on Tatooine.

# 4 The return of Mythrol

It was left frozen in carbonite in the first episode of The Mandalorian, has now thawed and become an ally. He is still traumatized from meeting Din Djarin.

No, C-3PO doesn’t teach kids on Nevarro, but he’s a protocol droid like him. This isn’t the first time we’ve seen a female protocol droid in Star Wars. Think of the introduction to The Phantom Menace.

During his classes, the Protocol Droid quotes many planets that are known to Star Wars fans. It is reminiscent of Coruscant, the capital of the republic, where a large part of the preface takes place. Kessel, the famous planet where Han Solo made his famous raid in 12 parsecs, but also Chandrila, Kylo Ren’s home planet and capital of the New Republic.

# 7 the return of the mysterious Dr. Pershing

This doctor appeared in season one testing Baby Yoda. In this new episode, we learn that he took blood samples for strange experiments. It is reminiscent of the Midi-Chlorians.

This is what purists of the original trilogy hate the most, and an important part of the Prelogy, we’re talking midi-chlorians. They were completely put aside in the last trilogy, they’re back in The Mandalorian. You probably remember the test Qui-Gon takes on Anakin in The Phantom Menace. The higher the midi chlorine level, the more powerful you are in power and that is what Dr. Pershing interested in Baby Yoda.

We have a full article here for you to read, but there is plenty of evidence to suggest that this is an essay for making Snoke that can be seen in the tank. The Mandalorian series was intended to show us the origins of the First Order.

The Scout Troopers are back with their famous motorcycle jets. As in Return of the Jedi on Endor, our heroes are pursued by Scout Troopers. We’d already seen a few in Season 1.

# 11 Cara Dune is from a known planet

At the end of the episode, when Cara Dune talks to the New Republic pilot, they bring up Cara Dune’s home planet, which Alderann dated as Princess Leia. She still seems traumatized from the loss of her family when the planet exploded from the Dark Star in A New Hope.

# 12 The symbol of the Rebel Alliance

At the end of the episode, Cara Dune is offered a medal from the New Republic. In the first season we learned that she had fought for the Rebel Alliance, which bears the same symbol. This medal looks like a sheriff’s star, which could suggest it is now an officially recognized Marshall by the New Republic.

At the very end of the episode we see Moff Gideon in a room with an army in preparation. The play of light makes them difficult to tell apart, but they are likely death troops. Another trend theory announces thanks to the manipulations of Dr. Pershing raised an army of force-sensitive Clone Death Troopers. We should have answers very soon.

# 14 From mercenary to director

Actor Carl Weathers, who plays Greef Karga, is the director of Episode 4 of Season 2 Chapter 12: The Siege.

In this scene a member of the technical team can be seen in the background. Hello jeans and the clock in Star Wars.

So much for those 15 little details in Episode 4 of Season 2 of The Mandalorian. While you wait for the next episode, rediscover the little details of the third episode of season two.