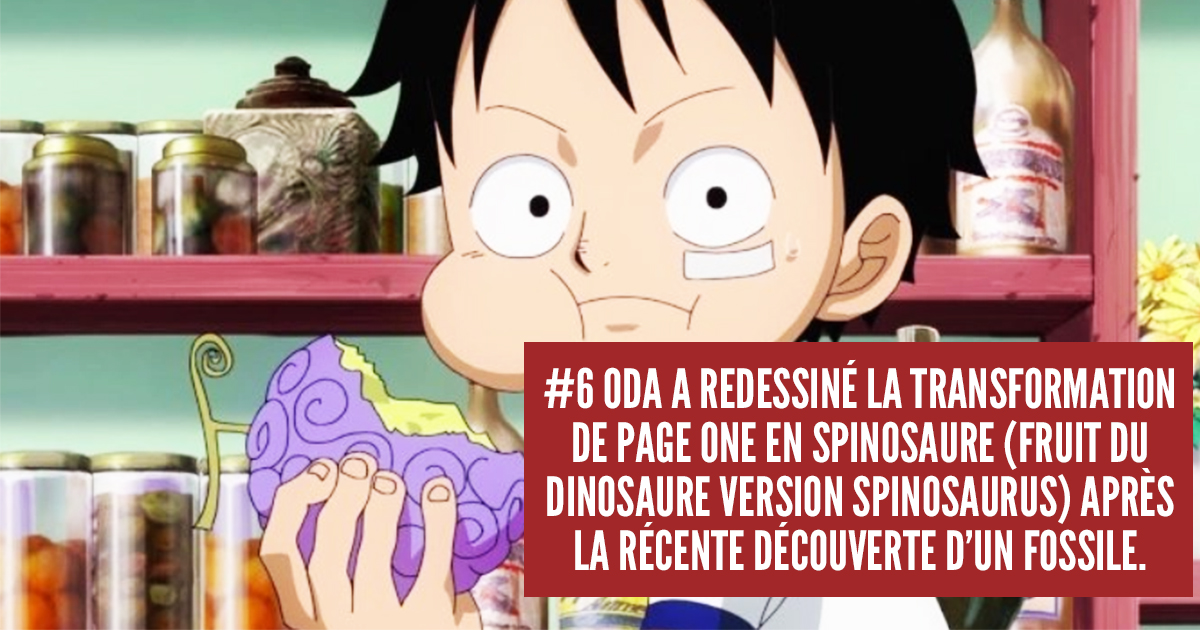 Some time ago we offered you to find our top 10 lousiest Devil Fruits from One Piece. As we wrote this article, we noticed several things: Devil Fruits are more complex than they appear at first glance, and they contain certain secrets that many internet users are still unfamiliar with. We therefore suggest learning 14 things in this article that you may not have known about Devil Fruits.

According to Lysopp, it is not possible that the same kind of devil fruit exists in doubles at the same time. But Oda previously said that Luffy’s devil fruit – and its effects – were published in a book, which means that at least one person must have eaten it before him. Oda explains it very well:

I didn’t make a mistake. To give you a clue, let me rephrase what Usopp is saying. “The same powers do not exist twice AT THE SAME TIME”. How do you mean ? For more details, all you have to do is wait for a certain professor to show up in the story and explain what REALLY devil fruits are … well …

A devil fruit could therefore reappear after the death of its previous owner.

As we all know, one of the main disadvantages of ingesting a devil fruit is that its user can no longer swim. One fan wondered how Crocodile (the character who ate the fruit of the sand, which makes him particularly weak in the face of water) manages to purify himself. Oda responded with detailed information on how the shower and bath work for Devil Fruit users in general, and Crocodile in particular. The latter explains:

First, let’s talk about the problem of bathing Devil Fruit users. The sea can refer to anything, rivers, swimming pools and baths … any kind of standing water. When these people get in the water, not only are they unable to use their powers, but they also find it difficult to move their bodies. You can struggle a bit, but it doesn’t help much. With less than half the body or just the limbs, it’s easier. Likewise, rain and water droplets have no effect. Therefore, hip baths or showers are the most common choices. In Crocodile’s case, “water” is the real weakness of his powers, so his abilities fly away even in the shower. But it’s not like there are enemies around him when he takes a shower.

Many of the forces created by ingesting a devil fruit affect the whole body, including body parts that anime does not normally talk about, such as the genitals. With his powers, Luffy is able to stretch any part of his body (yes, all of them). Joz’s genitals turn into diamonds when he activates his abilities. Baggy can use his abilities to sever his genitals and send them into the air. If Marco lost his male member for any reason, the Tori Tori no Mi, Phoenix model would allow him to regenerate. In addition, by using her devil fruit, Nico Robin is free to develop her breasts just like any other part of her body.

4) Only one person can gain power from the devil fruit

What happens if two people eat the same devil fruit? Can both attain powers? The answer is a categorical no! Devil Fruit’s powers are transferred after a single bite. After that, the fruit in question is just an ordinary old fruit. If several people bite at the same time, power rests with whoever swallows them first. Nothing will happen if someone else bites from it. In summary it can be said that a single devil fruit cannot give its powers to several people.

5) Since when have there been devil fruits?

Nobody knows exactly how long the Devil Fruits have been around, but we do know that they have been around since the Missing Century (also known as the “Forgotten Century”), which spanned from 800 to our 900th year. We know that thanks to Kozuki Toki, who traveled into the future thanks to the fruit of time from that time.

Science regularly discovers new elements about dinosaurs. For example, in April 2020, scientists discovered fossil evidence suggesting that the Spinosaurus might have been an aquatic dinosaur that swam with a paddle-shaped tail. Obviously, Oda couldn’t have known this when he designed Page One’s Spinosaurus transformation (which includes the dinosaur fruit version of Spinosaurus). When he found out, Oda hurried to correct his drawings in his manga to reflect this change.

A fan once confronted Oda with the question of whether he had considered giving Luffy another Devil Fruit. The latter replied that he was satisfied with his choice, although he had tried hard to find the ideal fruit. Except that he had another idea in mind, because:

I thought a lot about this idea before the series started, but not at all since then. I love the idea of ​​a rubber man. On the other hand, I’ve flirted with the idea of ​​Ero Ero no Mi (fruit of love) maybe 13 times since then.

Some devil fruits sound absolutely delicious, but make no mistake: they all taste terrible. However, there is an exception to this rule, as the SMILE fruits produced actually taste quite pleasant. Perhaps this was why so many people were willing to eat them at their own risk.

9) oda would have chosen a certain devil fruit for him

If Oda could eat devil fruit, which one would he choose? One fan speculated that he would like the fruit of Suke Suke no Mi, or “fruit of invisibility” in French, a devil fruit of the Paramecia type that allows its user to become invisible. Oda replied shocked:

CORN ! Where do you draw these conclusions from? This is absolutely correct!

Oda makes questionable jokes at times, so fans hit the nail on the head by imagining that he wants that particular power (or at least that’s what Oda wanted to imply).

10) There is an encyclopedia of the devil fruit

The world of Devil Fruits is a mysterious world that no one in the One Piece universe fully understands, or so it seems to us. What little information there is, however, is compiled in an encyclopedia. Not all of the demon fruit depicted come with a photo, however, so even those lucky enough to get their hands on a copy of this rare book and a devil fruit may not necessarily know what is causing the fruit.

You don’t have to be a living being to consume devil fruit. An inanimate object ate devil fruit at least three times. One of the examples that immediately comes to mind is alpacacino, a bazooka that ate a devil fruit that enabled it to transform into an alpaca. Likewise, Rassu is Mr. 4’s weapon and pet. He is a bazooka that thanks to Dr. Vegapunk ate the Inu Inu no Mi. We know this is a process invented by Vegapunk, but the story ends here for now.

12) Only one character received the powers of two devil fruits

It is widely believed that it is impossible to have more than one devil fruit, as the demons within will fight each other, killing the consumer of that fruit. This is not entirely true as there is only one well-known example of a character who managed to eat two fruits without dying: Blackbeard, who both owns the Yami Yami no Mi (which you can use to master the darkness in particular ) and the Gura Gura no Mi, which gives the power of trembling. According to Marco, this is due to a special and abnormal structure of his body.

13) Only one devil fruit escapes classification

Most devil fruits are classified into the following types:

But there is only one exception to this rule and the Tama Tama no Mi, an “unknown” devil fruit that allows its user to have the body composition of an egg and gradually gain weight of a chicken. He was eaten by Tamago. This fruit has attributes of all three types, so it is not assigned to any particular type.

The human fruit (Hito Hito no Mi) transforms anyone who eats it into a human. So Chopper became a reindeer-human hybrid. But what if whoever eats it is already human? Oda explains (or rather not):

I think I should say they are getting “more human”. Um, you could say that means growing up or finding your true spirit or something like that. So basically people will live more humanly. Good. I think you can say that. Or not. Basically no. Goodbye (Run away)

As you can see, Oda didn’t really think about this possibility. It’s up to us to let our imaginations run wild.

Is there actually any information about Devil Fruits in this article that you did not know about? Then don’t hesitate to let us know in our comment section! Additionally, if you want to continue your swing, we recommend that you take our previous personality test, which will allow you to know which devil fruit you would have eaten in One Piece.

Avengers 5 could be an adaptation of this fan-loved story