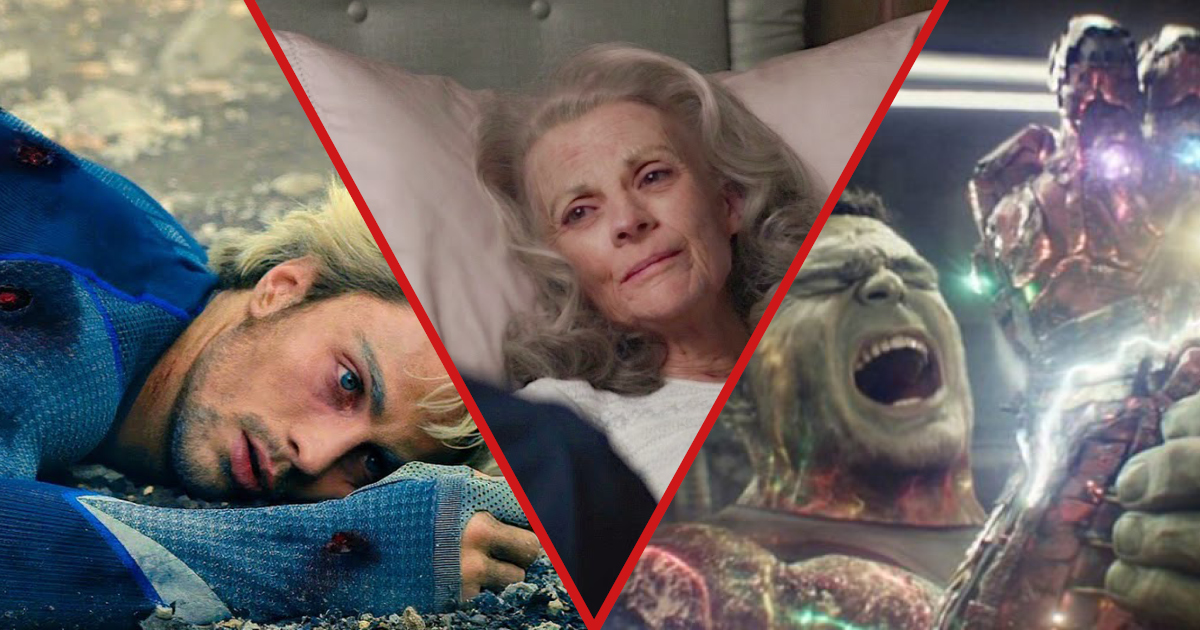 In order to produce compelling films, it is often necessary to make decisions that will grab attention. Producers and scriptwriters are literally breaking their heads to come up with conclusive scenarios where absolutely nothing is left to chance. This is even more true when talking about the MCU. Inside, everything has to be adjusted with millimeter precision so that the foils follow one another and do not contradict one another. A goldsmith’s work, then, in which many scenes are written, of which Kevin Feige and his teams ultimately only select the best to appear on our screens …

In order not to get spoiled, we highly recommend checking out the latest MCU productions before reading this article.

1) Spider-Man reveals his true identity instead of Mysterio (Spider-Man: Far From Home)

One of the post-credits scenes from Spider-Man: Far From Home features host Jonah Jameson revealing a video of Mysterio that was taken minutes before his death. In his final moments, the villain tries to impersonate Spider-Man as the instigator of the terrible events in London and ends his speech by revealing the superhero’s true identity.

However, screenwriter Chris McKenna told the New York Times that the character’s identity revelation would take place during the final fight. Peter Parker himself, who would have been the author, would be even crazier! However, the writers felt that this scene might have “spoiled the victory” for the superheroes. They then decided to offer Mysterio that moment of fame and put the scene right after the credits.

2) further development for Natasha Romanoff after the Snap (Avengers: Endgame)

Even before Black Widow released her own film or even sacrificed herself in the events of Endgame, several storylines were being considered for the character.

One of them was revealed to us by the Russo brothers during a podcast on The Gist. In it, the directors of Avengers: Engame conjured up an old idea of ​​the time that was to center the movie’s script on the collateral damage the snap would have caused. At the same time they admit to having developed an intrigue around the many orphans who saw their parents disappear during the event.

And imagine if Natasha Romanoff had played a central role. During that time, the heroine would have become the director of her own orphanage in Washington. It would have been the opportunity for her to start her own family as she had always dreamed of …

3) Peggy and Steve Rogers should have been reunited long before Captain America: The Winter Soldier (Avengers)

We can say that the reunion between Peggy Carter and Steve Rogers was long overdue. After connecting with these two characters in Captain America: First Avenger, fans couldn’t wait to see them back on screen together.

However, they had to endure their problems patiently. According to director Joss Whedon, reports the New York Times, a scene was designed for the film Avengers that is both “beautiful and poignant”. Ultimately, however, it never saw the light of day on our screens. At least until the movie Captain America: The Winter Soldier, where Steve Rogers is finally shown at Peggy’s bed, aged and then suffering from Alzheimer’s.

4) A flashback should show us the death of Strange’s sister (Doctor Strange).

If Stephen Strange chose to study medicine, it was after the trauma of his younger sister’s death. According to director Scott Derrickson, a scene should be created that should illustrate all of this.

In Doctor Strange, the audience would have watched Donna drown if the scene hadn’t been erased for good. While it was touched, it just didn’t match the tone of the film, much to the director’s regret.

In a deleted scene from the movie Thor: Ragnarok, it was possible to see Hela stab Odin as he had just given Thor his powers.

This sequence looks very different from what we were finally allowed to see on the big screen. In fact, in the final version of the film, the King of Asgard bows peacefully surrounded by his two sons Loki and Thor.

One of the scripts for Avengers: Endgame saw the creation of a duo with a bright future. Given their respective popularity, Wanda and Rocket Raccoon could literally have blown the canvas if we had got them to go on some adventures together.

We’re not the only ones who think that way, because Christopher Markus himself admitted that a whole story was developed around the two superheroes. But that had happened long before the decision to kill Vision, which eventually found its way into Avengers: Infinity War. As a result, in light of the latest events that had happened to her, Wanda was no longer considered compatible with Rocket’s character.

7) A version of the film suggested to reverse Sam Wilson and Spider-Man (Avengers: Endgame)

As you can see, Avengers: Endgame has been the subject of so many alternate versions. One of them explored the idea of ​​reversing the position of two characters in the script.

Spider-Man would then have found himself next to Steve, Bucky, Natasha and Wanda in Wakanda. In the meantime, Sam Wilson would have been sent into space to assist Tony Stark. The idea of ​​such a scenario was described as “amusing” for Christophe Markus, who however realized that the scenes in this configuration no longer seemed as moving as in the original version.

In the final scene of the film Black Widow, Yelena comes to meditate at her older sister’s grave. Then she whistled, which, according to the director, could have triggered a reaction from Natasha Romanoff.

Cate Shortland stated that during this scene it was assumed that the heroine would hiss back. That would then show fans that Natasha was somehow still alive somewhere. Unfortunately, it didn’t, which definitely seems to put an end to his adventures.

9) After Bruce Banner donned the Infinity Gauntlet, he should have spoken to the Hulk (Avengers: Endgame)

As we know, when a person uses the Infinity Stones, they are thrown in front of a being that is important to them. This is how Thanos then spoke to a young version of Gamora while Tony Stark could see his daughter in adult form.

What about Bruce Banner? He, too, once had the experience of using these infinity stones … Who could he have exchanged a few words with? While this scene never aired, it appears to be well-written. Then we learn that Bruce is having a conversation with the Hulk, according to screenwriter Christopher Markus.

10) Pietro Could Have Survived and Become an Avenger (Avengers: Age of Ultron)

Wanda’s brother Pietro Maximoff could have had a bright future if Marvel hadn’t decided otherwise. Joss Whedon has said that during the time of Avengers: Age of Ultron, several unaired scenes revolved around the character.

These then showed a very lively Pietro recovering from his injuries. These scenes were saved in case Marvel and the director change their minds about the character’s terrible fate. In the end, this was not the case, which then kept another Avenger from us.

If you like the little secrets behind Marvel productions, you’ll finally find out if Captain America is truly a virgin or not.