10 Alien Species We Would Like To See In The MCU 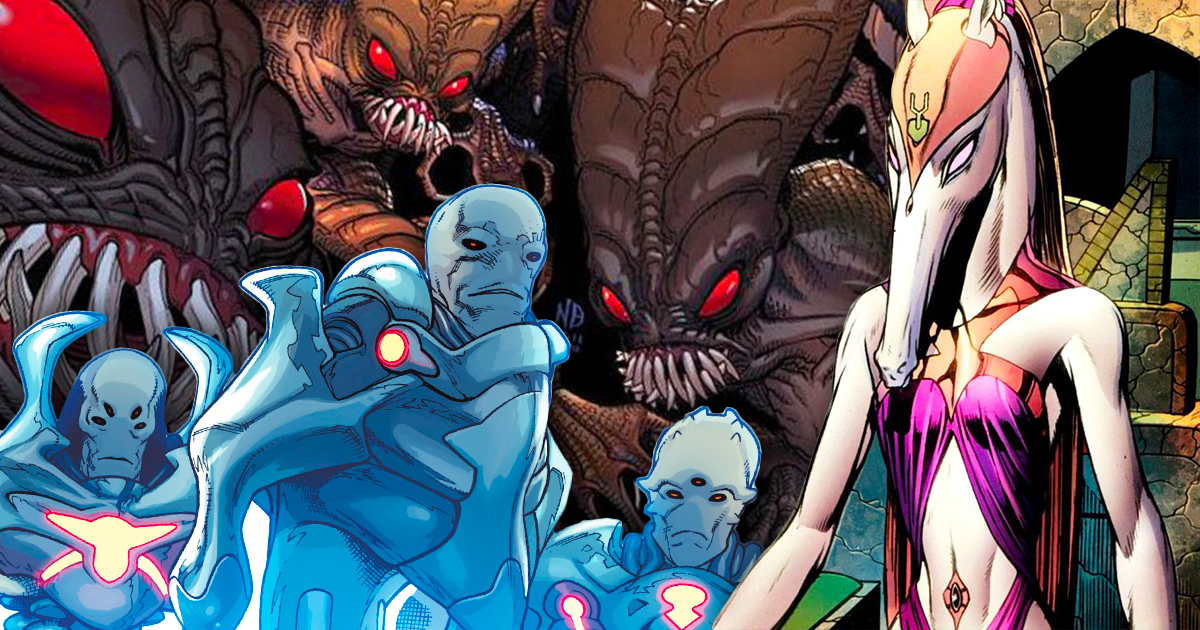 Many characters have gradually appeared in the MCU. As previously unknown races such as the Xandarians, the Kree or the Skrulls have been added to this universe, others seem to be patiently waiting their turn. Indeed, there are many cultures and histories yet to be discovered throughout the galaxy. The Marvel Universe isn’t just about what you can see in the MCU. Hundreds of alien species have been developed in the comics but haven’t had a chance to make it to the big screen yet. Check out these 10 alien races we’d love to see in the MCU.

The Phalanx are an alien race modified by the Kree. It is a techno-organic life form that, through a virus, has evolved the ability to integrate other species into its own. On several occasions these aliens have defied the X-Men.

In the Annihilation: Conquest series, the Phalanx is placed under the control of Ultron. So, if Marvel were to want to bring back this big villain, it’s possible these aliens are in the game too.

The Beyonders are one of the most dangerous alien races in Marvel Comics. It is a species of mysterious origins that lives in a dimension outside of the multiverse.

In Time Run Out, the Beyonders display enough strength to defeat the Celestials of each universe with a single blow. So it might be interesting to see her as a savior in the upcoming Eternals movie.

Space spirits are extraterrestrial creatures living in temporal limbo. They have an awkward physique that makes them look oddly like elves. But no matter what they look like, these individuals have some pretty interesting abilities.

The Ghosts of Space can transform into anyone to take their place and get their hands on their abilities. With such power, they can sow discord in groups of heroes, as they often did with the Avengers in the comics.

The Snarks, also called Zn’rx, are an alien reptilian race. They come from the planet Schnarkworld. These creatures are ruled by an emperor married to multiple queens, each leading their own clan.

This species has attempted to invade Earth many times. However, it was repelled by the Power Pack (or Power 4) every time. So if this group of superhero kids were to be included in the MCU, they would likely be included with enemies like the Snarks.

If you’re a fan of the Alien franchise, you’ll like the creatures that we’re about to present to you. The brood is a species of insect that acts as a parasite for other breeds. In other words, they can lay eggs in other bodies so that they take on their properties.

Their ability to reproduce quickly makes them a very big threat to the heroes of the Marvel Universe. In particular, The Brood has managed to infect several members of the X-Men, alongside some other heroes such as Ghost Rider or Thor.

The Shias are not an extraterrestrial species per se. Rather, it is an intergalactic empire that brings multiple cultures together. This entity forms the third great empire of the Marvel Universe, after the Kree and the Skrull that MCU fans already know.

The main representatives of these extraterrestrial beings have a rich and sometimes common history with those of Earth heroes. It would then be particularly interesting to see how “The Shi’ar Imperial Guard”, a powerful team of soldiers who enforce the laws of the Empire, have ended up in the MCU.

Marvel is definitely not done surprising us yet. At the edge of the galaxy there is a type of intelligent being called the Kymellian. They are a horse-headed alien race who maintain very friendly relations with the inhabitants of Earth.

They will also play a crucial role in the Power Packs story, which we told you about a little earlier. It would then be a great addition to the MCU as a pacifist populace if a production took a little more interest in the aliens that populate the Marvel Universe.

The Architects created by Captain Universe seem to have been around since the beginning of time. These aliens want to shape the multiverse according to their vision of things. Therefore, they have made it their mission to create and monitor life on other planets.

After the disappearance of whoever they considered their parents, the Architects began to dictate their laws in different universes. When they decided that Earth was a threat to the balance of the multiverse, the Avengers had to step in to stop them.

In the comics, the Skrulls are the main enemies of the Avengers. They aren’t the most terrifying branch of their kind, however. They too fear their distant cousins, who call themselves the Dark Spectres.

The Dark Specters were cast out of their galaxy for their use of the occult arts. They now spend their time wreaking havoc in the universe thanks to their ability to steal their victims’ identities by piercing their skulls with their pointed tongues.

It’s no secret that Marvel and DC copied each other to design some of their characters. It is therefore not surprising to see clones of Superman in the Maison des Idées comics.

We won’t be talking about Ikaris here, but about an extraterrestrial race that looks like Kryptonians. The Strontians, as they are known, are a noble species of powerful beings capable of the same feats as Superman. Their power depends on their self-esteem. The more confidence they have, the stronger they become.

And you, which alien species are you most looking forward to finding in the MCU? Let us know what you think in the comments section. While you wait to read, discover nine reasons you would have hated being the Hulk.